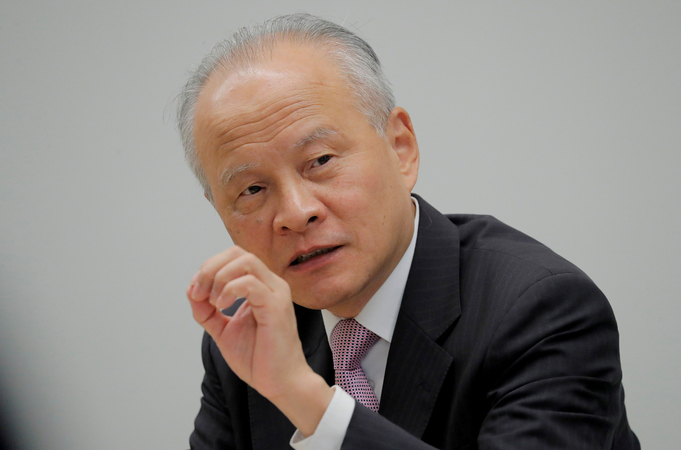 Attempt by Washington to pressure Beijing ahead of meeting called 'futile'

Washington's attempt to roll out "microphone diplomacy", align with allies and pressure Beijing ahead of the China-US high-level strategic dialogue "is futile" and "will make no difference", Beijing warned on Thursday.

Still, China is ready to embark on adequate communication and an exchange of views with the US to push for their ties' healthy growth, Foreign Ministry spokesman Zhao Lijian said at a news conference on Thursday.

Zhao made the comment as senior diplomats of the world's top two economies arrived in Anchorage, Alaska, on Thursday for the meeting scheduled on Thursday and Friday.

The Chinese side is led by Yang Jiechi, a member of the Political Bureau of the Communist Party of China Central Committee and director of the Office of the Foreign Affairs Commission of the CPC Central Committee as well as State Councilor and Foreign Minister Wang Yi.

Ahead of this key meeting, the US kept pressuring China during its senior officials' recent visits to Japan and the Republic of Korea, and it announced an update of sanctions on China regarding the Hong Kong Special Administrative Region.

At the Thursday news conference in Beijing, Zhao, the spokesman, said that Washington recently came up with a slew of negative words and deeds regarding China ahead of the dialogue, and "the timing is curious".

All the agenda items eligible for discussion are on the table, and during the dialogue, Beijing will make clear its position and concerns, he said, reiterating China's strong will to champion core interests.

"The US should realize China's firm determination to safeguard its own sovereignty, security and development interests," he said.

Joint efforts will decide whether the meeting will yield outcomes or not, and the US should work for the same goal with sincerity and a constructive approach, Zhao said.

Chinese Ambassador to the US Cui Tiankai told Chinese media on Wednesday that both sides attach great importance to the meeting.

"We don't expect to solve all problems in one dialogue, so we don't have unrealistic expectations or illusions," Cui said.

"We hope this can be a beginning, and the two sides will start a process of honest, constructive and rational dialogue and communication. If this can be achieved, the dialogue will already be successful," he added.

In response to recent US moves aiming to win over allies in order to gain a "dominant position" in this dialogue with China, Cui, the ambassador, said, "Just like someone who walks at night alone will sing to help increase courage, but it is not of much use. If you have issues to talk about with China, do it face to face."

He said there are several big question marks in the minds of the global community, including whether the US can truly play the role of a responsible stakeholder in international affairs, whether it is really ready to return to multilateral cooperation, and whether it is willing to respect interests of other countries and listen to the voices of other countries.

"Many countries, including US allies, have such questions. Some just don't say it in public. It is hoped that the US will understand other countries' concerns," he added.

Commenting on Washington's alleged plan to push Beijing for concession on topics such as Hong Kong, Xinjiang and Taiwan during the dialogue, Cui said the US "should give up this illusion, as this attitude will only lead the dialogue to a dead end".

"If someone thinks that China came to snowy Alaska with sincerity this time to make compromise and concession, then I would suggest that my colleagues in Beijing cancel this trip as soon as possible. Why bother to come here?" Cui added.

Jia Qingguo, director of Institute for Global Cooperation and Understanding of Peking University, said resuming high-level contacts and exchanges is a key precondition for stabilizing China-US ties and prevent further deterioration of the ties, and it is already significant for senior officials to sit at the same table to talk on various issues they face.

Although it is seen as unlikely that the two sides will agree on a comprehensive plan for massive cooperation through this dialogue, "the discussion itself lays a foundation for managing differences", Jia said.