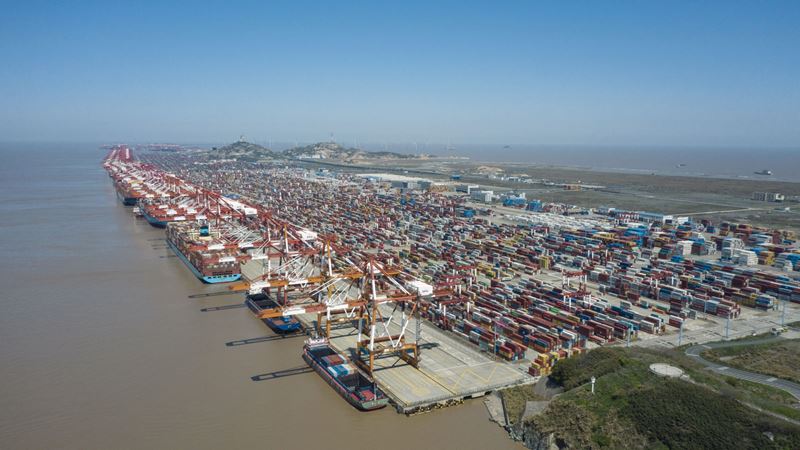 U.S. Trade Representative Katherine Tai and Chinas Vice Premier Liu He had a "candid" first conversation as the two sides try to resolve some of their differences on trade.

The trade chiefs spoke Thursday morning in Beijing, China's Ministry of Commerce said in a statement, and "conducted candid, pragmatic and constructive exchanges in an attitude of equality and mutual respect."

In a separate statement, the USTR said "Ambassador Tai discussed the guiding principles of the Biden-Harris administration's worker-centered trade policy and her ongoing review of the U.S.-China trade relationship, while also raising issues of concern."​

The phone call is one of the few top-level meetings between the two sides since President Joe Biden took office in January and comes after top diplomats had an acrimonious meeting in Alaska in March. While both nations agreed on a partial trade deal in 2020, China and the U.S. still have tariffs on billions of dollars in trade in place, and China has never met the purchase commitments it made in that deal.

The U.S. administration is reviewing its stance toward China and hasn't made any major changes to the policies it inherited from former President Donald Trump, although there are increasing signs of the direction it will take. The White House's top official for Asia said this week that the U.S. is entering a period of intense competition with China as its government becomes ever more tightly controlled by President Xi Jinping.

"The period that was broadly described as engagement has come to an end," Kurt Campbell, the U.S. coordinator for Indo-Pacific affairs on the National Security Council, said Wednesday. U.S. policy toward China will now operate under a "new set of strategic parameters," Campbell said, adding that "the dominant paradigm is going to be competition."

In contrast with much of the rest of the bilateral relationship, trade has been one of the less contentious issues recently. Ties have deteriorated over the past year or more on almost every other topic, with clashes over human-rights concerns including allegations of forced labor in China's western Xinjiang region; Taiwan; the crackdown in Hong Kong; Beijing's purchases of oil from sanctioned Iran; and the long-running disputes over the South China and East China Seas.

The trade deal should be seen in the context of "the overall U.S.-China trade, and economic relationship which is very, very challenging," Tai told Reuters in an interview Wednesday. "The overall challenges that we have with China are also still there and they are very large."

A blog affiliated with Chinese state media said that "there are still many differences between China and the United States and a breakthrough from the current situation requires more in-depth communication." Still, the "stabilizing role of economic and trade cooperation in Sino-U.S. relations remains important," according to Taoran Notes, which is a blog linked to the Economic Daily and was seen as an authoritative commentator on the trade talks in 2019.

The Liu-Tai call followed a staff-level phone discussion that took place Tuesday night Washington time, according to a person familiar with the planning for the meeting. During the call, the Chinese stressed the importance of tariff rollbacks as a necessary component of next steps in the relationship, the person said.

The Biden administration so far has left in place tariffs affecting billions of dollars in trade that were imposed under Trump. Tai has pledged to build on the January 2020 trade pact, saying on May 5 that she respects the continuity of U.S. policy.

However, despite the tariffs that the U.S. and China have in place, trade is actually growing, with Chinese imports from the U.S. hitting a record in March. China's exports to the U.S. have been strong due to the pandemic, U.S. stimulus payments and an economic rebound.

Neither side has any interest in "initiating a trade-off that would end the Trump-era tariffs," according to Hosuk Lee-Makiyama, director of the European Centre for International Political Economy in Brussels. "China sees the tariffs as illegal and hostile acts, while the Biden administration sees tariffs as a topic where they have nothing to win in terms of approval ratings, but everything to lose."

Tai has previously said she expects China to live up to the commitments it made in the trade deal reached under the Trump administration and that the Biden government is focused on enforcing existing trade agreements and rules.

Although those purchase targets look out of reach, agricultural goods may still prove a bright spot, with China purchasing corn for delivery later in the season to meet a domestic shortfall and a banner year for U.S. imports still on the cards.

The stock market initially gained on the news of the call but that didn't last. The benchmark Chinese stock index was steady at the lunchtime break after rising as much as 1.1% in the morning session, while the offshore yuan was little changed at around the strongest level since 2018.

Liu was the senior negotiator for the deal and served as the USTR counterpart during the tenure of former trade chief Robert Lighthizer. Under the agreement's Trade Framework Group, the USTR and the Chinese counterpart are due to meet every six months to discuss implementation. The last time that happened was August 2020.