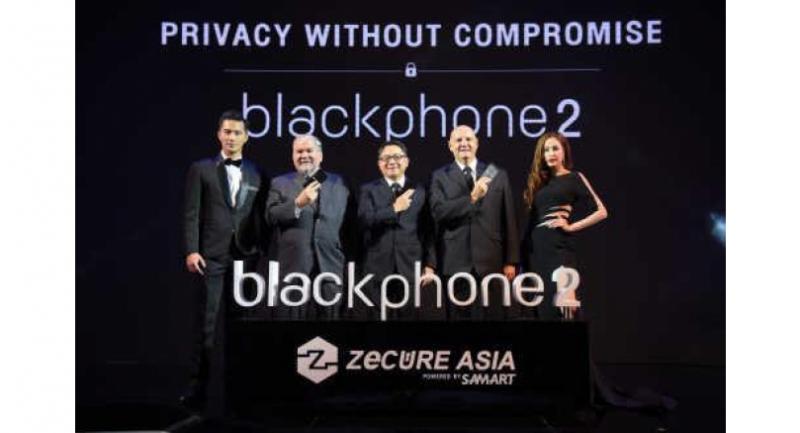 US SECURE-COMMUNICATION company Silent Circle has partnered with Samart Corp affiliate Zecure Asia Co to introduce to Thailand, and also the Cambodia, Laos, Myanmar and Vietnam (CLMV) markets, its Blackphone 2, a smartphone known for its privacy technology.

Silent Circle awarded a three-year exclusive deal to Zecure Asia to market its products in these five markets. The deal also covers security applications the two partners will jointly develop in the future.
The Blackphone 2 is aimed at customers concerned about data privacy, ranging from celebrities to stock investors. Thailand is the first country in Southeast Asia to market this model, which made its debut here yesterday.
Phil Zimmermann, the co-founder of Silent Circle Co, said that after expanding into the Southeast Asia market, it allied with Zecure Asia Co to launch the Blackphone 2 in Thailand first, noting the rapid growth of the smartphone market in this country.
He added that despite a large variety of smartphone brands in Thailand, no other company focused on the importance of protecting the data inside the phone. In the same way, Thai and other Southeast Asian people still overlook the matter of their privacy and information security. For these reasons, Zecure Asia had the potential to raise the awareness of Thais and other Asians on the importance of data privacy on a smartphone.
“As a consequence, we are confident [enough] in Zecure Asia enough to give it the monopoly right to market the Blackphone 2 in SEA regions [Southeast Asia] as well as to join us in developing security products and applications on smartphones in the future,” he said.
Silent Circle is known worldwide as a secure-communications company offering mobile devices, software applications, and communication management services to enterprises.
Samart president Watchai Vilailuck said the partnership reflected his company’s continued expansion of its business to cover all new devices and gadgets.
“We aim to sell around 20,000 units of this model in Thailand this year,” he said.
Zecure Asia targets revenue of Bt300 million this year from all of its products, he said.
Zecure Asia was founded on November 18 last year, aiming to offer services concerning security solutions for electronic devices and software to respond to modern lifestyles.
According to Zecure Asia, the Blackphone 2 is the world’s most secure smartphone, able to ensure a high level of data storage and protection. Zecure Asia analysed the privacy features of smartphones from a variety of companies before concluding that Silent Circle’s product was the best.
Watchai said Silent Circle offered world-class technologies to everyone ranging from the biggest companies, government institutions, and celebrities to normal users in order to ensure their privacy while using electronic devices and communication channels on smartphones.
He said the Blackphone 2 would appeal to those who long for privacy in communication and confidential information storage in their smartphone, such as businesspeople, investors, political persons, government officials, soldiers, actors and celebrities.
The marketing strategy will focus mainly on such digital channels as viral video clips to encourage the target groups to see the importance of data privacy. There will also be advertising campaigns through Google AdWords, Facebook Ads and Web banners as well as other marketing activities supported by a budget of more than Bt30 million.
The Blackphone 2 costs Bt22,900. Customers will also receive an additional package from Silent World for 100 minutes of free international calling over 12 months.