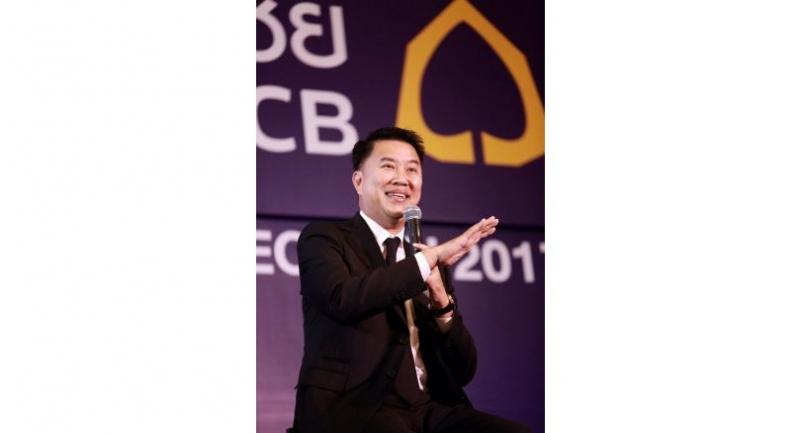 Siam Commercial Bank plans to issue US-dollar-denominated unsecured notes worth US$1.1 billion (Bt38.76 billion) by the end of this year after issuing $400 million in subordinated debentures  on Monday as part of its efforts to manage funding costs.

Kittiya Todhanakasem, chief financial officer of SCB, said yesterday that the 5.5-year notes were replacing the $400 million worth of notes that matured last September.
Dollar-denominated notes worth $1.1 billion will be maturing in November, so the bank is preparing to issue new notes to support liquidity and lending in US dollars.
US dollar loans currently stand at 6 per cent of SCB’s loan portfolio, she said.
SCB targets loan growth of 4-6 per cent this year against 5.8 per cent last year, said Arthid Nanthawithaya, president and chief executive officer.
At a press conference on SCB’s business direction for 2017, Arthid said the bank would now resume aggressively going after business as economic prospects appear to have brightened.
The focus is on retail banking, especially credit cards and wealth management.
Retail loans, especially through credit cards, will drive loan growth, and such lending growth will come from corporate clients.
SCB is separating services from sales to give customers better access to the financial services they need.
The bank hopes that the spin-off will make its non-net interest income turn to growing 3-4 per cent this year.
Its non-NII last year dropped by 17.5 per cent mainly on lower revenue from its life-insurance subsidiary and lower net trading and foreign-exchange income.
The bank is overhauling life insurance in line with the spin-off of sales and services at its branches.
It will combine life insurance, its securities subsidiary and its asset management subsidiary into a single platform to increase product holdings and foster customer engagement.
SCB is transforming itself to achieve the ambitious goal of the “Most Admired Bank”.
It will boost investment in technology infrastructure by Bt30 billion to Bt40 billion over the next three years to accommodate digital platforms and use business intelligence technology to strengthen both internal and external sources.
SCB aims for digitisation of 30-50 per cent this year.
The cost-to-income ratio at SCB is at its lowest at 38.7 per cent. After increasing IT investment, the bank targets a ratio of 40-43 per cent.
Despite the additional investment, the bank believes it will maintain its profitability.
Last year, SCB reported an increase in net profit of 0.9 per cent to Bt47.6 billion.
The bank has redesigned its branches in terms of both physical facilities and service approach to cater to each customer segment. It launched a pilot branch called “SCB Business for SMEs”.
Kittiya said the bank expected loan-loss provisions this year to be lower than last year’s Bt22.53 billion, while its coverage ratio would be maintained at 130 per cent at a minimum.
Its coverage ratio last year was 134.3 per cent.
The bank is still tightening lending criteria to tackle non-performing loans and improve credit costs even though this year it will actively expand in retail banking.
NPLs from new lending should be reduced because the bank has more selective customer segments such as payroll and mass affluent accounts.
NPLs will be kept from rising to no more than 3 per cent from the existing 2.67 per cent, she said.