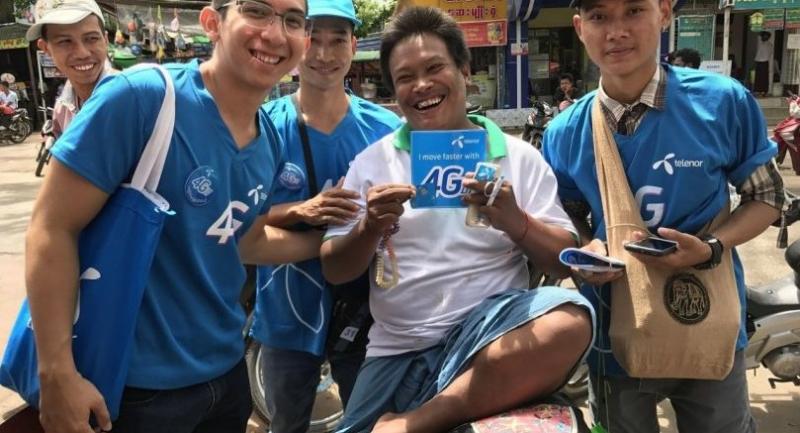 MYANMAR’S three telecommunications operators, buoyed by the burgeoning ranks of smartphone users, have intensified their efforts to provide 4G/Long-Term Evolution (LTE) services with the sales hook of faster data connections.

Myanma Posts and Telecommunications, the nation’s leading telecommunications operator, on Monday launched Myanmar’s fastest data service, dubbed LTE+, with the 1.8GHz spectrum that was recently allocated to it by the Posts and Telecommunications Department. Using advanced technology, MPT is initially offering its high-speed data service in Yangon, Nay Pyi Taw and Mandalay; it will reach other cities over the coming months.
Toshitake Amamiya, chief executive officer of MPT, said the 4G service would deliver mobile data at up to 10 times faster than under 3G.LTE+ and would lead to faster data downloads and uploads. He said the operator used the latest 4x4 Multiple Input Multiple Output technology to double data speed and boost the download rate by 100 per cent from 75 megabits per second to 150Mbps.
“It offers customers lightning fast mobile data speeds unlike what was possible before, at the same charges as all our pay-as-you-go rates and data packs,” he said.
“Data users will feel the incredible difference as they download or send large files, play data-intensive games or stream high-definition videos at just a fraction of the time through our boosted cell towers.”
Amamiya hailed the service as a huge leap forward for Myanmar’s telecommunications industry, saying it would transform people’s experiences with online content and services.
MPT has completed its LTE+ network rollout in 47 townships and will expand the service to five additional cities - Bago, Taunggyi, Mawlamyaine, Monywa and Pathein - in July. It plans to cover more than 30 cities by September.

Telenor’s LTE
Telenor Myanmar launched its LTE service on June 15 after testing it on the 1,800 MHz frequency band in Yangon. Its 4G/LTE services are available in 29 townships within the Yangon municipal boundaries and will expand to more cities over the coming months, according to Joslin Myrthong, chief marketing officer at Telenor Myanmar.
Myrthong said the Norwegian telecommunications company had introduced 4G services to 25 major cities across the country on the 2,100MHz and 900MHz bands.
The Telenor 4G service is available in nearly all states and regions, except for Chin and Kayah states.
“With the recently acquired 1,800MHz spectrum, we now are set up to provide a richer Internet experience with superior download speeds, smoother high-definition video streams, lag-free gaming, a stronger social media experience, and more consistent performance in peak hours,” he said.
“The rapid deployment of ‘real’ 4G/LTE services will elevate Myanmar to be among the best in this region, and further accelerates the adoption of multimedia-rich digital services for communications, commerce, education and entertainment.”
Ooredoo Myanmar, the nation’s first 4G network provider, has invested US$80 million in its services on the 1,800MHz spectrum since gaining regulatory approval last month.
Charity Safford, chief marketing officer of Ooredoo Myanmar, said its technicians had been busy rolling out the spectrum and upgrading sites to deliver faster speeds.
“Customers have much bigger data needs than can be provided on 3G technology – for example, they want a superior experience watching TV on their mobile phones,” she said.
Safford said the operator boasted the highest number of 4G active users in Myanmar, with its network covering almost five million people in 52 townships of five cities - Yangon, Mandalay, Nay Pyi Taw, Bagan and Magwe. The Middle East-based operator launched Myanmar’s first 4G network on the 2,100MHz spectrum in May 2016.
To back up its service offerings, Ooredoo revealed a new corporate logo on Monday as it prepares for further growth in the digital era.
“We always look for innovative ways to offer the best service. We need to accept change and have to change if we want to grow. This is an exciting time for us and we should all be inspired to meet the challenge,” Safford said.