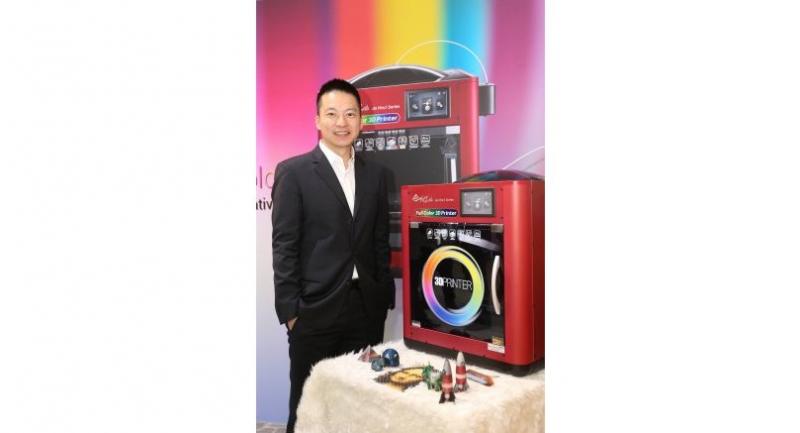 XYZPRINTING, a subsidiary of New Kinpo Group, a global electronic manufacturing services (EMS) and original design manufacturing (ODM) company, has promoted Thailand as a hub in expanding its business in Asean.

Anthony Huang, a senior manager at New Kinpo Group, and sales and marketing director of Greater China and Asean at XYZprinting, said that the company views Thailand as the core market and the hub for its 3D printers in Southeast Asia. Thailand is also the largest potential market because of its high number of local designers and SMEs.
The company earlier this month launched into the Thai market its “da Vinci Color”, the world’s first full-colour 3D printers that use 3DColorJet technology.
The company has decided that “promoting Thailand 4.0 is in line with the marketing strategy of XYZprinting and that Thailand is the target to open and expand our 3D printing business in the whole Asean region,” said Huang.
He said that Thailand is an international country with strong culture and creative design.
“We have used Thai designers as our market resources. And 3D printing and design industries are more relevant” in Thailand, he added.
Huang said that Cal-Comp Electronics, which is also a subsidiary of New Kinpo Group, was established in Thailand in 1989. The company invested in the Kingdom starting when it first opened local manufacturing facilities nearly 30 years ago.
“We are deeply rooted in Thailand with a strong factory foundation and R&D team,” said Huang, adding that the company’s 3D printers had been produced at the Cal-Com Electronics’ facilities in Thailand’s Phetchaburi province and were exported to 100 countries in the US, Europe and Asia.
The company also has a strong research and development team of about 2,000 people around the world to invent and develop 3D printer technologies and provide after-sale customer services. Huang said that the company’s target for Asean sales is to achieve annual market growth of between 50 per cent and 100 per cent over the next three to five years. This is higher than the average global annual growth rate of over 30 per cent.
“The Asean [potential] is just beginning, and Thailand’s market keeps upping its performance, and based on these years of validation, we can reach our goal,” he said.
XYZprinting was first established in Taiwan in 2013, and expanded to Thailand in 2015 with a sales and marketing operation, XYZprinting (Thailand).
Huang said that the biggest problem for increasing sales in the Asean market is that many people have insufficient knowledge about 3D printing.
“A lot of people have never even touched it, and this is the most basic problem. And 3D printing is a high-end industrial-grade application. Its price and technology is also hard for individual people to afford and adopt,” he said.
“We face that challenge. However, our research and development should continue to improve and provide the best products in the market at more affordable prices.”
Expanding their customer base through educating people about 3D has been a focus in recent years. The company worked with schools to expose students to the new technology, a move that is in line with Thailand’s educational market reforms. And they’ve participated in events to increase exposure to grow their market. Social media and online platforms help them get information about 3D printing to a wider audience.
Yet accurate statistics about the potential 3D market in Asean have not yet been produced by authoritative market institutions, said Huang.
“Because the entire Southeast Asian market economy has taken off, we are now optimistic about the overall market. We do not have a clear assessment of the annual growth of the market, but at present our good performance keeps on doubling,” said Huang. “We have seen strong domestic demands for 3D printers in the region from individual designers and from do-it-yourself (DIY) [hobbyists]. A huge number of printer factories have also applied our applications to bring their cost down while raising efficiency in their manufacturing process,” he said.
In the short term, 3D printing will continue subverting some of the industry’s traditional production processes. In the long run, it will affect global trade, he said.