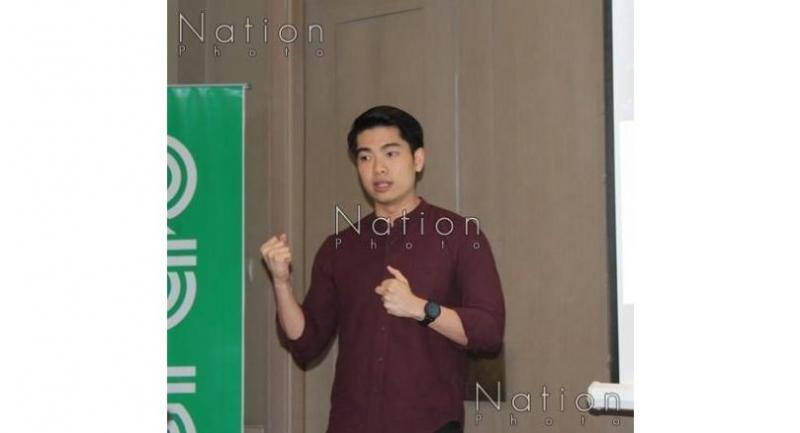 Following its substantial growth last year, Grab, a Singapore-based technology firm  providing the most popular ride-hailing service in Myanmar, announced on Thursday its plans for expansion in the market, according to Alvin Loh, acting country manager of Grab Myanmar.

“We have set the bar high but we are eager to raise it even higher,” he said at a meeting with a small group of invited journalists.
Loh takes the pride in saying that Grab Myanmar enjoyed 300 per cent growth in terms of daily rides last year, when compared to 2017. Last year, passengers in Yangon travelled over 93 million kilometres through the application.
“The number of our driver-partners has grown two times over the past twelve months, and their average income has grown by 220 per cent, compared to 2017,” he said.
Loh added that 85 per cent of all rides were rated 5-stars by passengers last year, proving that the passengers are extremely satisfied with Grab’s services.
“We also more than tripled our growth in term of the number of complete rides in 2018. We are happy with that, and continue to see a healthy growth this year and beyond,” he said.
Loh stressed the importance of improving passengers’ and drivers’ experience, as it is equally important as the growth of business performance. Yet, he refused to disclose the firm’s performance statistics due to market sensitivities.
“We are cautious about releasing such figures because of potential external factors which could have an influence on our business in the coming years,” he said.
“Nevertheless, we feel upbeat and positive about our progress in the market. In 2019, we are focused on improving the experiences of all passengers and driver-partners, with new in-app features and ride-hailing services which will cater to different groups of commuters.”
According to Loh, new services and features will mainly drive the firm’s growth in 2019, assuring its leadership position in the market.
Loh believes that Yangon continues to be the main driver of Grab’s business as it  has been offering its services in Myanmar’s commercial hub since it hit the road there in March 2017.
“Our journey in Myanmar has been meaningful for us. We have grown so quickly in such a short period of time. All of this would not have been possible without the support of our passengers and commitment of our drivers,” he said.
“We are ramping up for an exciting 2019 with plans to continue bringing positive impacts on communities across Myanmar. Our services in Mandalay and Bagan are also growing in popularity.”
This year, the firm will focus on expanding three new ride-hailing services in Yangon: GrabShuttle, GrabCall and Grab Web Booking. GrabShuttle is a bus service to offer safe and affordable rides to offices and universities while GrabCall aims at easy bookings of taxi rides via call centre agents. Web booking service mainly aims at hotels and offices to book rides efficiently through an online portal.
Additionally, it will also launch “Rent for car” bookings with dedicated drivers in Mandalay. Fares will be charged on an hourly basis while tour packages and one-way trips to Pyin Oo Lwin, Sagaing and Innwa are also available, he said.
“We realised that Grab taxi has made a lot of people more comfortable. But we are still not at a level where many people in Yangon can use it on a regular basis,” he said.
“If everyone gets encouraged to go to work at the same time together, this could reduce their costs to a large extent, and also helps ease traffic congestion, particularly in peak hours. This is the idea behind GrabShuttle,” he said. The firm is currently testing two routes with 20-seater buses before the launch of its shuttle service later this year.
Loh seems confident in sharing rides, though such practice is yet to become popular in Myanmar.
“Our main goal is to give commuters the ability to choose a service that best suits their needs, whether it is a personal taxi ride or car-pooling. We hope passengers will try GrabShare and enjoy benefits such as reduced fares and making new friends. For people in Yangon who do not want to share a ride, we have other options,” he said.

Grab’s presence outside Yangon is also on the rise with its business doing well in Upper Myanmar. In Mandalay, its three-wheeler driver base has increased by 300 per cent from May (when the trial started) to December 2018. The firm has also partnered with some taxi drivers and motorcyclists to provide different options for passengers in Myanmar’s second largest city. In Bagan, the firm has partnered with more than 50 three-wheeler drivers.
“We have actively contributed to addressing transportation challenges in key cities of Myanmar. We will continue to innovate and evolve our offerings to create a more efficient transport network and improve the experiences of our drivers and passengers,” Loh pledged.