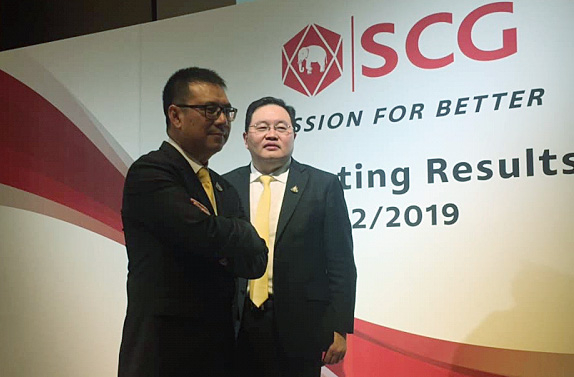 SCG Group is revising down its total revenue growth for this year to 9 per cent from its early estimate of up to 10 per cent, after it reported a total revenue of Bt221.47 billion in the first half of 2019, which was 7 per cent lower than the same period last year, the group’s president and CEO Roongrote Rangsiyopash told the press on Friday.

The company’s net profit was Bt18.7 billion in the first half of the year, showing a 16 per cent slump from last year’s first half. In the second quarter of this year, the group reported a revenue of Bt109.09 billion and net profit of Bt7.04 billion, which was 9 per cent and 27 per cent less than the same period last year respectively.
Roongrote said judging by the market trends, the company has no choice but to revise down its revenue target.
SCG has also revised its investment plan this year by suspending some projects that will take more than three years to go into operation, but is continuing with projects expected to generate returns in one or two years, he said.
He added that the company had gone ahead with spending Bt20 billion to acquire a 55 per cent stake in Indonesia’s packaging firm Fajar in June.
Thammasak Sethaudom, SCG’s vice president of finance and investment, said Fajar is expected to start contributing to the group’s revenue in the third quarter of this year. Fajar reported a net income of 1.40 trillion rupiah (Bt3.1 billion) at the end of 2018.
“Initially, we had earmarked Bt60 billion for investing both locally and overseas, including the petrochemical complex in Vietnam. However, our plan to acquire a state in Fajar was not included, which later pushed the budget beyond Bt70 billion,” Thammasak said.
Roongrote said SCG’s financial results in the first half of this year was lower than initially estimated mainly because the price of petrochemical goods has dropped due to the appreciation of the baht, which is having a direct impact on its exports. The ongoing US-China trade war is also having a direct impact on the business.
SCG’s petrochemical business recorded a total revenue of Bt92.23 billion in the first half of the year, or 16 per cent lower than the same period last year. Profit for the period, without severance pay adjustment, dropped by 35 per cent year-on-year to Bt10.53 billion, and stood at Bt10.04 billion if severance pay is factored in.
Its packaging business recorded a 5 per cent dip in revenue year-on-year to Bt41.52 billion, due mainly to a demand for both soft and hard packaging. Profit for the period, without severance pay adjustment, showed a 2 per cent slump year-on-year to Bt3.05 billion, and Bt2.71 if severance pay is factored in.
Meanwhile, SCG’s building materials business made Bt94.23 billion in revenue, up 3 per cent from last year’s first half. Its net profit without factoring in severance pay showed a rise of 17 per cent year-on-year to Bt4.87 billion and at Bt3.91 billion if severance pay adjustment is taken into account.
For the rest of the year, the global economy is still expected to face unexpected risks due to the China-US trade war, as all signs point to further appreciation of the baht, while the price of oil continues to rise due to Iran’s crisis.
All these factors are expected to have an impact on the group’s financial results, Roongrote said.