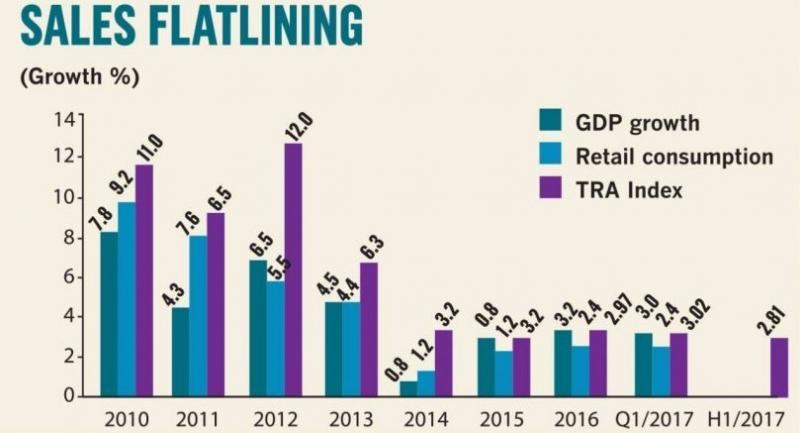 WEAK CONSUMER spending in the second quarter of the year has exacerbated concerns for the sales performance of the big retailers in the second half.

The Thai Retailers Association (TRA) says it is concerned about how spending power will hold up among middle- and low-income earners amid high levels of household debt. Spending in the upper middle group is still inhibited by high levels of credit card debt, it added.
The TRA represents the big department stores and supermarkets along with chain stores – collectively dubbed modern retailers that account for about 30 per cent of the country’s retail sales.
TRA forecasts that the retail sector will remain steady moving into the third quarter and increase into the peak fourth quarter in line with the spending cycle. Although the government will accelerate tenders for public infrastructure, the investments will take six to eight months to appear in the retail figures and thus will have no effect on retail growth in the second half.
Nonetheless, the group is looking to a slight improvement in the total index for 2017 from that seen in 2016, with growth expected at 3-3.2 per cent. The TRA said its Retail Index for the first half of 2017 grew by only 2.81 per cent – representing the sales growth reported by its members.
It noted that growth in the Retail Index was for 3 per cent for the first quarter, dropping to 2.6 per cent for the second quarter and pointing to continued sluggishness in the third quarter. The retail sector has also struggled in the face of reduced economic stimulus measures.
However, Jariya Chirathivat, president of the TRA, noted that the second half has seen clear growth in various product categories clustered at branches in Greater Bangkok and major tourist cities in a few provinces that make up only 30 per cent of all branches of big retailers.
Still, the other 70 per cent of provincial branches showed only weak growth, bringing down the second quarter index and the overall second half down with it. This situation reflects the reduced buying power of provincial shoppers, amid sluggish economic growth.
Jariya called on the government to issue additional stimulus measures with more clearly defined targets.
Chatrchai Tuongratanaphan, TRA executive director, said Thai consumers had long engaged in debt-fuelled spending. Household debt jumped from 57-58 per cent of GDP in 2007 to 84-85 per cent last year.
“Solving the problem of high household debt will take a certain period of time,” he said. “The government is on the right track in trying to solve such debt problems. Such measures include the elimination of grey money and bringing all debts into the system that the government can control. The government’s infrastructure projects will also lead to investment expenditure and employment. The money from such projects will then will go to individual employees as their debts will be reduced, and spending power will thus be increased.
However, this loop process will take about 8-12 months before the reduction of household debts will be effected,” said Chatrchai, adding that the government had created a database of poor people so that assistance packages can be targeted directly to them.