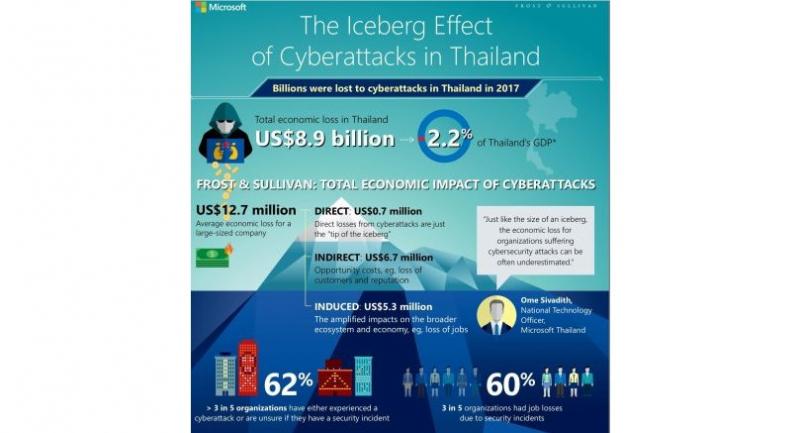 Overall, attacks by cyber criminals are set to cost organisations in the Asia Pacific US$1.75 trillion in economic losses – more than 7 per cent of the region’s GDP, says the study conducted by Frost & Sullivan and Microsoft.
The study, “Understanding the Cyber Security Threat Landscape in Asia Pacific: Securing the Modern Enterprise in a Digital World”, involved a survey of 1,300 business and IT decision makers ranging from mid-size to large organisations - identified as having more than 500 employees.
The study pointed out that in. 2017, large organisations in Thailand incurred an average loss of US$12.7 million from security attacks, including in $700,000 of direct losses and US$6.7 million in indirect losses. Also, they suffered an average of US$5.3 million in what the study called induced losses.
A large organisation in the Asia Pacific region could possibly incur an economic loss of as much as US$30 million, the study found.
Cyber security attacks have led to job losses in Thailand and in Asia Pacific, with almost 60 per cent and 67 per cent of organisations, respectively, being forced to shed jobs over the past last year due to this problem.
Nattachai Charusilawong, consultant for mobility practice at Frost & Sullivan, said the total economic losses consist of direct losses, including revenue, productivity, fines, lawsuits, and remediation; indirect losses, including customer churn, reputation, and job loss; and induced losses, including consumer and enterprise spending.
“The direct losses from cyber security are the most visible, but are just only the tip of the iceberg,” said Nattachai.
Organisations in Thailand have encountered cyber security incidents included online brand impersonation, data exfiltration, and data corruption, which are the three biggest concerns and have the highest impact with the slowest recovery time.
Ome Sivadith, national technology officer at Microsoft Thailand, said that that there are three threat trends – botnets, which affect millions; hackers, which go for easy targets; and ransomware, which will grow as a problem. These threats delay digital transformation plans.
He said that the five cyber security recommendations for securing the modern enterprise included cyber security as a digital transformation enabler; investment to strengthen fundamentals; the maximisation of skill and tools with the best of integration of suite tools; continuous assessment, review and compliance; and the leveraging of artificial intelligence (AI) and automation to increase capacity and capability.
Microsoft injects US$1 billion a year in cyber security investment in three areas: platforms, intelligence and partners. Intelligence is the most important area for Microsoft, Ome said.
“The Microsoft intelligent security graph provides unique insights and is informed by trillions of signals, such as those from 400 billion emails analysed, 1.2 billion devices scanned each month, 930 million threats detected on devices every month, and so on,” Ome said. “These are constantly monitored by Microsoft’s AI-based security capability solutions.”
He said that AI is becoming a potent opponent weapon against cyber attacks as it can detect and act on threat visitors based on data insights. However, AI is one of many cyber security practices, “and organisations need to consider people, process, and technology”.
Organisations in Thailand and elsewhere in the Asia Pacific are increasingly leveraging AI to enhance their cyber security strategy. The study reveals that 75 per cent of organisations in the Asia Pacific and 84 per cent of those in Thailand have either adopted or are looking to adopt an AI approach towards boosting cyber security.