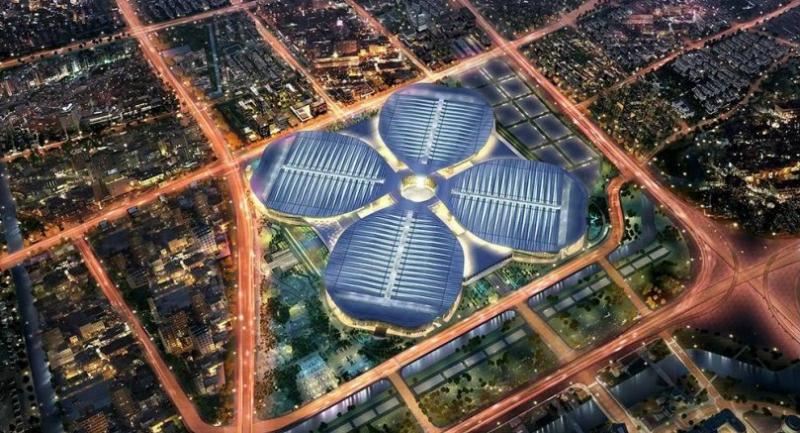 OVER 200 Thai exhibitors have registered to participate in the first China International Import Expo (CIIE) to be held in November this year, making it one of the largest national exhibitor delegations, said its organiser.

“Thailand is very enthusiastic. Top registered exhibitors involve food and agriculture,” Lu Jun, CIIE media coordinator, told a group of international journalists during their visit to the CIIE bureau in Shanghai early this week.
Among the 200 export-oriented Thai firms to sign up, one large Thai conglomerate has booked a 500-square-metre space – one of the largest spaces so far booked – to showcase their products to potential buyers at the expo, Lu said.
China is Thailand’s top export market. Last year’s total value of exports to China reached Bt997.9 billion, an increase of 19.73 per cent from 2016, according to Thailand’s Ministry of Commerce website.
In January-May 2018, Thailand exported Bt390.9 billion worth of goods to China, a decrease of 3.72 per cent from the same period of last year.
The Expo in China is the only import-only event of its kind in the world, according to organisers. It will be held during November 5-10 at the National Exhibition and Convention Centre in Shanghai, with the aim to further optimise China’s trade structure with the rest of the world.
The event was part of the One Belt One Road initiative and the Chinese government plans to hold it annually in Shanghai.
“China will open its market to the world. Unlike previous expos, this time exhibitors from more than 100 countries will come here to export and we will import [products] from all over the world,” Lu said.
President Xi Jinping of China first announced the 2018 CIIE in a speech before the Belt and Road Forum for International Cooperation in May 2017.
Xi said that China would actively develop mutually beneficial and win-win economic and trade partnership with countries participating in the Belt and Road construction.
The decades-long massive transportation and communication project would drive trade and investment between all relevant countries, he said, lead to a free-trade network, and assist in regional and global economic growth.
Lu said it is a significant move for the Chinese government to host the CIIE. The import expo demonstrates firm support for trade liberalisation and economic globalisation, and actively opens the Chinese market to the world.

It facilitates countries and regions all over the world strengthening their economic cooperation and trade, and promotes global trade and world economic growth in order to make the world economy more open, he said.
According to China’s Ministry of Commerce website, in 2017 the total import and export value of China reached US$4.1 trillion (Bt136 trillion), with an increase of 11.4 per cent year on year. Exports hit $2.26 trillion (Bt76 trillion), an increase of 7.9 per cent, while imports were $1.84 trillion (Bt61 trillion), an increase of 15.9 per cent, while the trade surplus was $422.51 billion (Bt14 trillion), a decrease of 17 per cent.
Lu declined to comment on the Chinese government’s projected figure for increased imports after the Expo. However, during his presentation to media he gave the figure of $10 trillion as the estimated value of the Chinese market’s rapid growth in consumption and imports.
So far, enterprises from more than 100 countries and regions, including One Belt One Road participating countries, the United States, and Europe had registered to join, Lu said.
The CIIE bureau estimates that over 1,700 exhibitors, 150,000 domestic and foreign professional purchasers and up to 200,000 visitors from across the world would daily participate in the event.
With an area of 240,000 square metres, the total exhibition will offer both a country pavilion for trade and investment fair, and an enterprise and business exhibition. The exhibition area will consist of two sections, one each for trade in goods and services.
The 180,000-square-metre section for trade in goods will include six exhibition areas: high-end intelligent equipment, consumer electronics and appliances, automobiles, apparel, accessories and consumer goods, food and agricultural products, medical equipment and medical care products.
The 30,000-square-metre section of trade in services will comprise tourism services, emerging technologies, culture and education, creative design and service outsourcing.
Trade in services will be among the highlights in the exhibition area, the organiser said.
From 2011 to 2015, China’s service imports rose from $247.7 billion to $467.4 billion, with an annual growth rate of 17.2 per cent, according to www.shanghaiexpo.org.
China also witnessed the most extraordinary growth in overseas tourism, the site said. Chinese residents’ spending on overseas tours have been continuously increasing for over eight years, with annual growth rate exceeding 20 per cent.
Meanwhile, service imports are also climbing fast in areas such as transport, business service, franchising, construction and insurance.