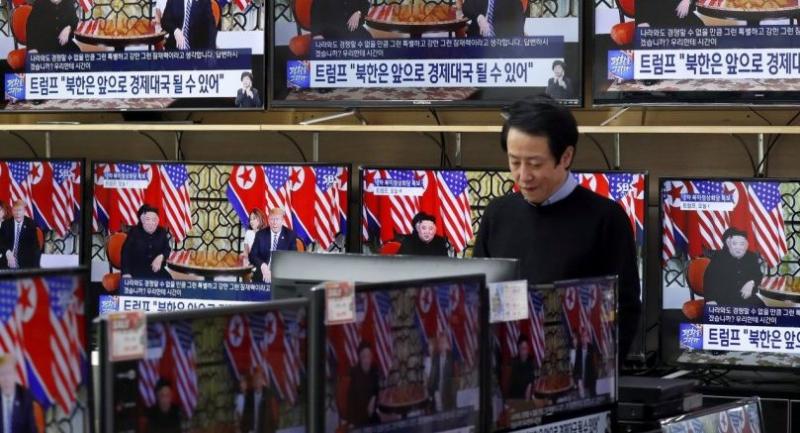 Equities had been fluctuating through the day on tempered optimism over China-US trade talks, weak factory data from Beijing and fresh geopolitical tensions in Kashmir.

But they took a decisive turn south after an expected lunch and signing ceremony between the US and North Korean leaders was called off at the last minute.

The shock news came just hours after Kim raised the prospect of a permanent US diplomatic presence in Pyongyang and Trump said he was in "no rush" for a speedy deal over North Korea's nuclear programme.

Both men left the summit venue in Hanoi without a public signing ceremony and Trump later told reporters he was not willing to give in to Kim's demands to lift sanctions on the country.

"It was about the sanctions," he said. "Basically, they wanted the sanctions lifted in their entirety, and we couldn't do that."

However, he said the talks ended on friendly terms and he was hopeful of progress further down the line.

Manila tumbled more than two percent and Jakarta was more than one percent down while Bangkok slipped 0.4 percent, though there were gains in Sydney and Wellington.

The global rally that has characterised most of this year had already taken a knock after US Trade Representative Robert Lighthizer told lawmakers that "real progress" had been made in trade talks with China, but a lot of work was still needed before a pact is signed.

While his comments did not derail expectations of an agreement at some point -- with both sides reporting good progress and Trump delaying a deadline for a deal -- it did give traders pause for thought, observers said.

"The combination of the lack of progress with North Korea and China will drag on equities and we might have to wait for a new catalyst to renew the bullish start to the year," said Neil Wilson, chief market analyst at Markets.com.

However, Zhou Hao, a senior emerging markets economist at Commerzbank AG, said the results were likely not as bad as they seemed and the outlook could be positive.

"I think we still want to wait for the next month's reading as this month's is distorted by the holiday," he said.

"Also the economy could stabilise this month. Rising input prices suggest that there is no need to worry about deflation, so the question now rests on whether the economy has enough impetus."

Nervousness continues to stalk trading floors after Pakistan and India said they had shot down each other's fighter jets on Wednesday, fuelling worries of a conflict between the nuclear-armed neighbours.

The developments followed the February 14 suicide bombing by militants in the disputed Kashmir region that that killed 40 Indian troops.

On currency markets the pound held gains after touching a near eight-month high earlier Thursday after MPs gave Prime Minister Theresa May more time to work on her EU withdrawal deal after she promised they could delay Brexit if necessary.

Sterling was also given a boost after the opposition Labour Party said it would back a second referendum, having lost a vote on its own Brexit plan Wednesday.

In early trade London and Paris each fell 0.5 percent while Frankfurt shed 0.4 percent.