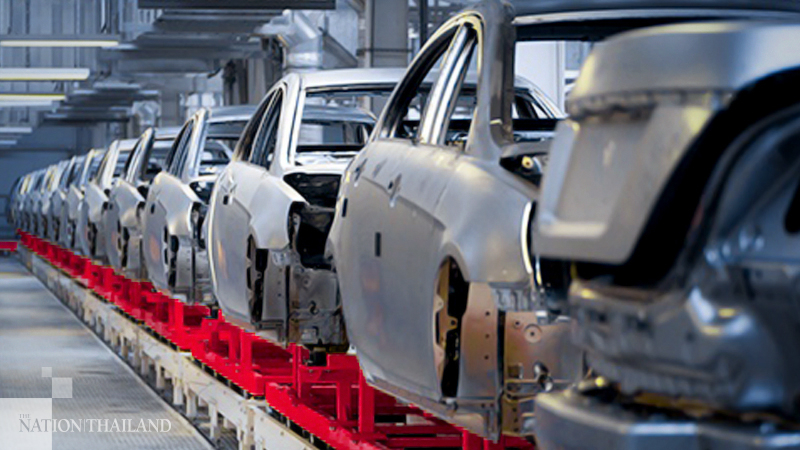 Covid-19 crisis will lead to accelerated change in the automotive industry: researchers

Academics predict the automotive industry will see a reduced workforce and use more robots and automation after the Covid-19 crisis, pointing to an unskilled workforce and noting that opportunities for new graduates to enter the automotive manufacturing sector are still low due to an obvious lack of experience.

Dr Saowanee Chantapong, a researcher at the CU-ColLar centre, and Dr Chadatan Osatis, a lecturer at the College of Population Studies at Chulalongkorn University, said in article titled “Turn over the Thai automotive crisis by enhancing labour skills” that entrepreneurs, labour workers and others would be forced to leave the automotive industry as it steers through this crisis caused by the coronavirus.
Thailand’s automotive industry is a world top producer of vehicles and parts, accounting for 14 per cent of total industrial production and employing 800,000-900,000 personnel. However, the Covid-19 pandemic has significantly affected the industry.

Car production falls sharply, SMEs hit hard
The country produced 1.9 million to 2.17 million vehicles, or an average of 160,000-180,000 vehicles per month, from 2015-2019, with half of the total production being exported. The industry began to slow in 2019 due to the declining Thai demand for cars, while the economy also slowed down from the result of an international trade war.
According to the Automotive Industry Association of Thailand and The Federation of Thai Industries, total vehicle production in the first half of 2020 decreased by about 40 per cent compared to the same period in 2019 to around 100,000 units per month, while exports declined by 33 per cent.
According to a seminar “Thai labour market after Covid-19: impact, trends and solutions”, SMEs – tier 2 and 3 auto parts manufacturers – are considered vulnerable and will be severely affected.
This group carries the risk of being replaced by technology as orders and production continued to decline in February, down 18 per cent, March, down 25-30 per cent, and April, down 50 per cent.

Employment and work patterns affected
A survey and interviews with workers in the industry, conducted by the Labour Ministry’s Department of Employment together with the Centre for Coordination of Labour Research, Chulalongkorn University (CU-ColLaR) from December 2019 to May 2020, found that those with high school education working on production lines would be most affected, especially in assembly-line quality checks and technical work due to gaps in computer and English skills. If a company makes use of new technology and innovation, these workers will not be able to continue their jobs, the survey showed.
The second group, aged 45 years and over with an education lower than a bachelor’s degree, work on production lines with an average monthly income of Bt55,000. If they are unable to develop skills to keep up with technology changes, they may receive a lump sum amount of about Bt2 million to Bt3 million from being laid off or on early retirement as a scholarship to continue working in other fields.
The third comprises a workforce aged 45 years and over with a bachelor’s degree in engineering. This group of workers will not be affected much. Even if they are laid off, they are more likely to find a new job easily.
Sluggish market conditions mean the automotive manufacturing sector does not want to accept new graduates or unskilled labour. Therefore, it is quite difficult for these groups to join the industry.
The employment outlook after the Covid-19 crisis will change as more workers will be replaced by robots and increased automation will come into play. The industry needs to prepare people to support the digital age, the researchers argued.

Lessons and challenges
The health crisis has presented the auto industry with lessons and challenges.
The first is the diversification of auto parts supply chain risks. Lockdowns in China have affected the global automobile and parts-supply chain. Although Thailand does not rely much on auto parts from China, there are some important parts that need to be imported from the Asian giant. Therefore, manufacturers have to rely on parts from Japan. This is a lesson that relying on a single production base can be risky.
Second is the just-in-time production downgrade. This crisis has disrupted global economic activity, resulting in inadequate raw materials, although Thailand has an advantage over other production bases in the region due to a cluster of domestic parts manufacturers. But complex auto parts need to be imported, requiring more inventory management.
Third, foreign investment is increasingly going to neighbouring countries instead as the domestic market becomes saturated, resulting in a domestic sales decrease.
Fourth, the speed of electric vehicle technology and this CASE (connected, autonomous, shared, electric) era, especially in European countries, has resulted in a change in production technology that focuses on choosing clean energy that is environmentally friendly. As a result, entrepreneurs and workers in the Thai automotive industry need to restructure to meet these challenges in the future.
The lesson for entrepreneurs is to reduce costs, increase productivity and product quality. This will benefit the supply chain as well as the service and social sectors, the researchers said.
Meanwhile, improving the technical skills of automotive industry workers must be accelerated during the transition to modern automobile manufacturing that includes demand for computer skills and foreign languages.
For those who have to leave the industry, the government should have proactive measures that focus on development and training to support workers changing occupations.
If all parties cooperate to help each other, it will help everyone overcome this crisis, the researchers added.