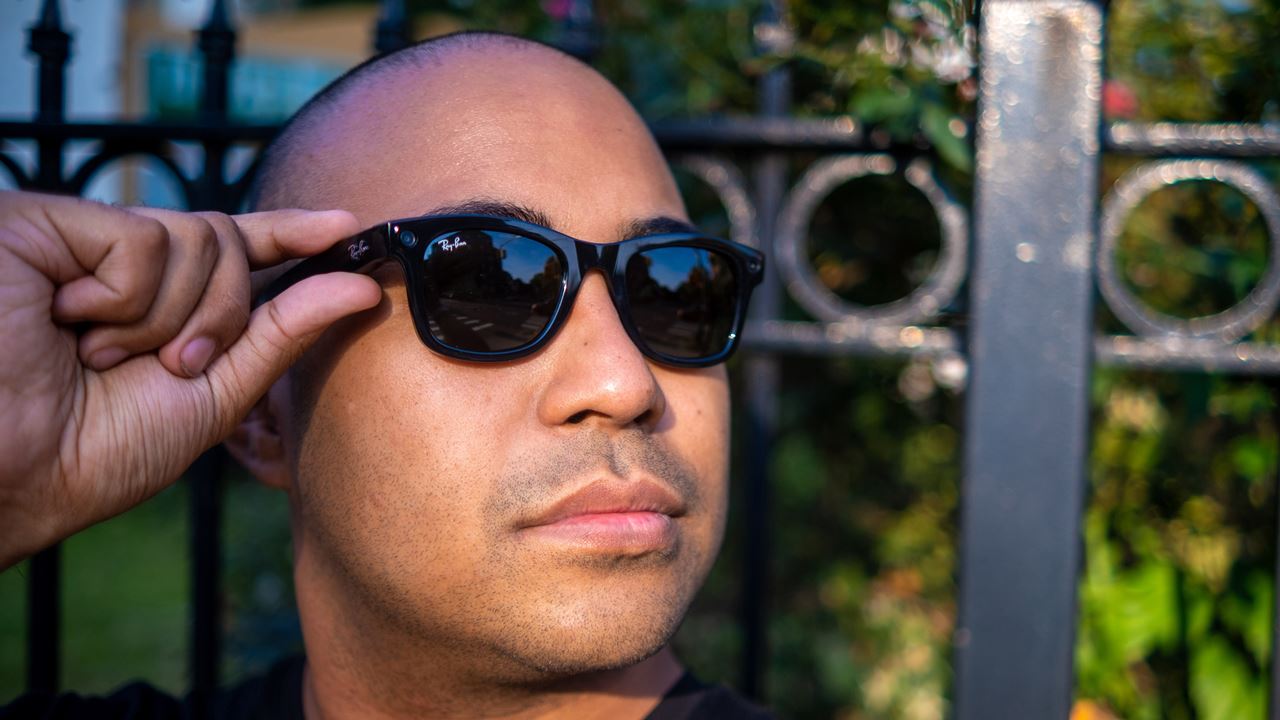 Facebook smart glasses put cameras on your face. Everyone around you should be aware

Facebook is betting that the future of socializing online will involve high-tech face computers foretold by science fiction sages. But when it comes to "smart glasses," the company isnt quite there yet.

The social media company on Thursday unveiled a $300 pair of specs built in partnership with eyewear company EssilorLuxottica that lets wearers take photos and videos from their perspective. There are no fancy displays or built-in 5G connectivity - just a pair of cameras, a microphone, and some speakers, all wedged into a set of Wayfarer-inspired specs.

Facebook argues that wearing tiny computers with cameras on our faces while we interact with the world and people around us might be fun and will get us one step closer into its metaverse. But devices like these come with serious questions about your privacy, and the privacy of the people around you. They're also a reflection of Facebook's further expansion into our lives: Our phones, our computers and our livings rooms weren't enough.

Facebook isn't the only tech company with smart glass ambitions, and many early experiments weren't successful. Google started selling early versions of its Glass headset in 2013, but it quickly flopped as a product for consumers - now it's just a tool for businesses and software developers. Snap first started selling camera-laden Spectacles in 2016 but it had to write off nearly $40 million because of unsold inventory. (In fairness, later models seemed to fare better.) Within the past two years, Bose and Amazon jumped on the bandwagon with glasses of their own, each using built-in speakers to play music and podcasts. By comparison, Facebook's first crack at consumer-ready smart glasses doesn't seem all that novel.

I've spent the past few days in New York wearing Facebook's glasses, and I've come to realize the most important thing about these might be that they just aren't too smart.

There's a pretty good chance you wouldn't be able to identify these as smart glasses at all if you saw them on the street. People will be able to pay extra for different frame styles and even prescription lenses, but the pair I've lived with for the past week mostly just look like a pair of standard Ray-Ban sunglasses.

To Facebook and EssilorLuxottica's credit, they feel like standard sunglasses, too - the arms are much thicker than usual to fit all the sensors and components inside, but they never felt cumbersome or uncomfortable. Even better, they weigh only a few grams more than the Wayfarers you might already own.

Facebook's grand idea here is that, by putting a device that shoots photos, captures videos, and plays music right on your face, you get to spend more time living the present and less time fiddling with your phone. Ironically though, these glasses aren't particularly great at any of those things.

Take the pair of 5-megapixel cameras next to each lens, for instance - they're capable of snapping some decent still images when you're out in broad daylight, but they pale in comparison to the 12-megapixel photos many common smartphones can capture. I could say the same about the video quality. The results generally look good enough to splash across TikTok and Instagram, but you're limited to shooting 30-second clips. And since only the right camera records video - and square video, no less - the vantage point seen in your footage often feels a little off-kilter.

So much for capturing the world as you see it.

Facebook says all that imagery remains encrypted on the glasses until you transfer them to the Facebook View app on your smartphone, where you can edit and export them to your social media platform of choice. Facebook's software offers you a few options for sprucing up your files, like stitching multiple clips together into neat little "montages," but the offered tools sometimes feel too limiting to produce the results you want.

The fastest way to start taking photos or recording video is by reaching up and clicking a button on the right arm of the glasses. And once you start capturing the world in front of you, people around will know it, thanks to a single, bright white light that fires up when you're recording. According to Facebook, people will be able to see that indicator from up to 25 feet away, which in theory gives them the opportunity to scoot out of your field of view if they want to.

But that assumes a sort of literacy with Facebook's design that most people won't have out of the gate. (These are, after all, pretty niche gadgets.) Word to the wise: If you see part of someone's glasses light up, you might wind up in someone's next social media post.

And those speakers? Well, they can't drown the din of a subway car, but they were pleasant enough to keep me distracted during some long walks. They're also just loud enough to be usable for phone calls, though you'll have to deal with the embarrassment of talking aloud to no one in particular. There's just one rub: These are open-air speakers, so if you can hear your music or the person on the other end of a phone call, chances are someone else might be able to as well. (That said, they'd need to be very close to you to eavesdrop effectively.)

The right arm of the glasses is touch-sensitive, so you can tap it to jump between music tracks. And Facebook's new voice assistant is baked into the frames, so you can tell your sunglasses to take a photo or start recording a video.

Yes, that's right: These glasses listen to you.

I'd be willing to bet that you - or someone you know - have wondered if companies like Facebook tap into your phone's mic to listen to you. I mean, how else would the ads you get served feel so personal?

The real answer is that these companies don't need our microphones; the behaviors we offer to them are enough to effectively target ads at us. But here's a product you're supposed to wear on your face, built in part by a company with a long, questionable history of privacy protection, with a microphone inside it. How could Facebook reasonably expect someone to buy these, let alone wear them for the five or so hours it takes to drain the battery?

The company's answer, in a way, was to prevent smart glasses from acting too smart. In the case of the Facebook voice assistant , the company insists it only listens for the "Hey Facebook" wake word. And even then, there are only three things you can ask after that: Take a photo, record a video, and stop recording. Facebook will almost certainly teach its Siri rival new tricks soon enough, but turning off those listening features entirely is plenty simple, and probably a good idea.

The company's intentional ignorance doesn't end there. When you take a picture with your smartphone, there's a pretty good chance your location is embedded into that image. The same can't be said for these Ray-Bans, since they don't contain a GPS or any other kind of location-tracking component. I checked the metadata of every photo and video I captured, and my location didn't appear in any of them. Facebook confirmed that it won't look at the photos and videos you've stored in the Facebook View app to target ads either - that can only happen once you've shared that media directly on Facebook.

These glasses also don't know how to play nice with anything but your smartphone. And even if someone does figure out how to access your files, Facebook says they all stay encrypted until they're transferred to your phone - and your phone only. For a nerd like me, who'd love to dump those videos onto my computer for editing, that's a bit of a disappointment. Still, I understand why: More connectivity means more vulnerabilities, and Facebook can't afford to put any of those in front of your eyes.

Whether these protection features are enough to comfort anyone is a deeply personal choice. If Facebook CEO Mark Zuckerberg's grand plan is to get us all comfortable wearing powerful, augmented reality glasses, it can't afford to freak people out this early on.