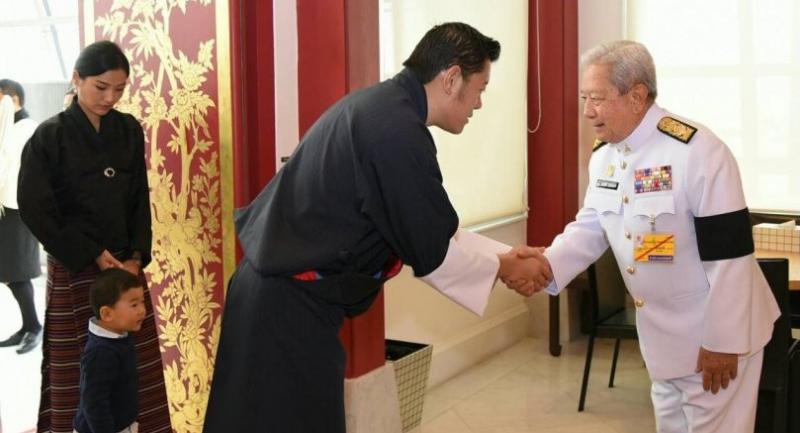 THEIR MAJESTIES King Jigme Khesar Namgyel Wangchuck and Queen Jetsun Pema Wangchuck of Bhutan as well as many representatives of royal families and governments of foreign countries arrived in the Kingdom yesterday to attend the Royal Funeral of His Majesty the late King Bhumibol Adulyadej.

Representatives from 42 countries will be attending the Royal Cremation Ceremony at Sanam Luang, where the 50-metre-tall crematorium is located. More than a dozen royals and senior officials of foreign governments would be arriving today, according to an official at the Foreign Ministry, adding that representatives of 21 countries had arrived in Thailand yesterday for the funeral.
King Jigme and Queen Jetsun with their son landed at Suvarnabhumi Airport a little before noon yesterday.

Their majesties were received by Privy Councillor General Surayud Chulanont, who was serving as the representative of His Majesty King Maha Vajiralongkorn, and General Anantaphon Kanchanarat, Minister of Energy, as a representative of the Thai government.
The arrival of the Bhutanese monarch caught the attention of many Thais and the media, especially social media, as King Jigme has been popular in Thailand since he, as crown prince, attended King Bhumibol Adulyadej’s 60th anniversary of his accession to the throne in 2006.
The Thai and Bhutanese royal families are close. King Jigme had visited Bangkok in October last year a few days after King Bhumibol passed away to pay homage to the late King.
The Bhutanese monarch has also organised special prayers in his kingdom today to honour the late Thai King. The event will be conducted at the Kuenselphodrang and His Holiness Je Khenpo will preside over the day-long special prayers.
The prayer ceremony will be attended by the members of the royal family, senior government officials, diplomatic corps, the Thai community living in Bhutan and tje general public.
King Jigme’s Facebook page said yesterday that King Bhumibol of Thailand was revered as a visionary not just in Thailand but all over the world.
The late King’s compassion and love for millions of Thai people has resulted in about 4,000 rural development projects, which have been at the forefront of innovation and continues to benefit millions of Thai to this day.
“In a lifetime of achievements, His Majesty the late King Bhumibol’s legacy of benevolence, vision and selfless persona will remain a hallmark of leadership and beacon of integrity for generations to come,” he wrote on his page.

Other foreign royals who arrived yesterday for the Royal Cremation included their majesties King Tupou VI and Queen Nanasipau’u of Tonga, and Queen Sofia of Spain.

Her Majesty Queen Sofia of Spain
Prince Andrew, the Duke of York, arrived in Thailand on Tuesday, while Prince Khalifa bin Salman al-Khalifa, the prime minister of Bahrain, arrived on Saturday.

US Secretary of Defence James Mattis

HM King Tupou VI and HM Queen Nanasipau’u of the Kingdom of Tonga.

Olga Epifanova, deputy chairperson of the State Duma of the Federal Assembly of the Russian Federation

Alan Peter S. Cayetano, Secretary of Foreign Affairs of the Republic of the Philippines.

Htin Kyaw,President of the Republic of the Union of Myanmar and his wife Daw Su Su Lwin

Christian Wulff, Former President of the Federal Republic of Germany

Tilak Marapana, Minister of Foreign Affairs and Minister of Development Assignments of the Democratic Socialist Republic of Sri Lanka