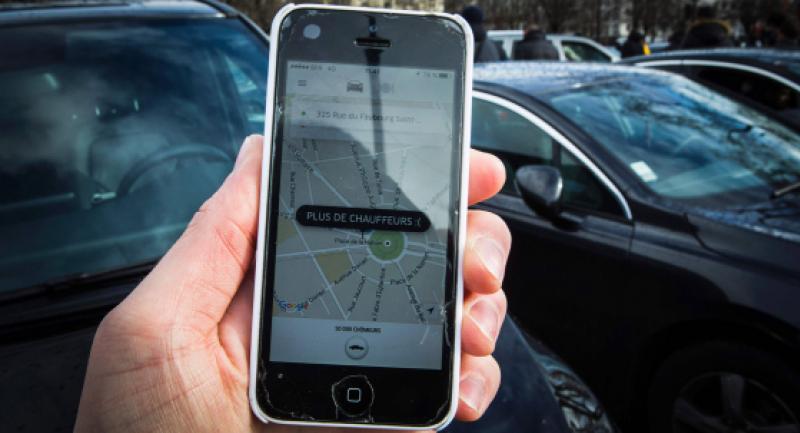 (FILES) This file photo taken on February 9, 2016 in Paris shows a smartphone displaying the app for ride service Uber with a box reading "No more drivers

DHAKA - By declaring the Uber taxi service illegal and planning to impose restrictions on smartphone apps such as WhatsApp, Viber, the government is preventing people from getting better services.

Saturday's paper delivered a double whammy to readers, leaving many of them baffled. They were told that Uber taxi service, which they are so keen on using since Dhaka has no mass transit system, was illegal, and world-renowned smart phone apps, the likes of Viber and WhatsApp, they so rely on are going to be restricted in Bangladesh because the government has not been earning as much money from international calls.

The transport minister went on record on Saturday as saying that Uber has to follow legal framework and systematic procedures.

What the authorities are actually saying is that every Uber taxi has to register with the Bangladesh Road Transport Authority (BRTA) as a commercial vehicle, not a private one, which makes the point of Uber immaterial.

It was designed so that people dropping off loved ones at the airport could carry a few people back to the city. These people would otherwise return with an empty car.

A service like this could have revolutionised the quality of our city transport. We have thousands of cars in this city, which run around with empty seats most of the times while people hang from the door handles of buses.

Let's face the reality. We do not have quality here. We have buses running in the city, which most city junkyards across the world would not buy per kilogramme.

And taxis? Well the fares for taxis are not extraordinarily high compared to other countries where other means of transport are available as alternatives, but it is beyond the affordability of many living in our vast city.

So you might think well “what was wrong with Uber then?” “Why can I not move around in a vehicle, probably air-conditioned, certainly safer, and as affordable as a CNG-run auto-rickshaw?”

The answer probably is because the authorities don't want you to. When it comes to the BRTA, things are weird to say the least.

For example: If you want to buy a car with more seats and try to get it registered, you have to pay extra. A 1.5 litre five-seater costs 1,150 taka ($14) less to get registered than a car that carries seven people. It feels like it's a tax on people trying to save the environment.

If you buy a new car, your registration fees are less than what you would pay for a second-hand one. There is a hefty reconditioned fee that has VAT on top as well and it is nearly 19,000 taka in total for a five-seater 1.5 litre car. This is going on when studies say it is more environmentally friendly to keep an old car going rather than scrapping it and buying a new one.

It is cheaper to register a taxi than it is for a family to have a car registered. Then the question is why does the government want to get people to re-register their cars as taxis? It will certainly be losing money.

It feels like the authorities do not want the middle class to have peace. It feels like they want families to pay more in the long run to get around, by paying taxi drivers, than have a car of their own.

It becomes very hard to believe the rhetoric that the authorities are working for the people, not for the few business people at the top, whom the government has lent its ears to.

Is Uber something that would harm the city people? Is it so dangerous that it ought to be killed?

What it would do is “hurt” a lot of business people involved in the transport sector. By “hurt” we mean less profit or having to compete.

This is probably what is going on now. Business people terrified of being “hurt” are filling the government's ears with fears of the unknown. What they actually care about is their business, not the people in Dhaka city, who have to go through a lot of hoops to get to work or come home every day.

However, a system should be put in place by which city dwellers will be able to know that they are getting into a safe vehicle. Uber, BRTA or the government needs to make sure passengers don't become victims of crimes. They have to make sure that registered drivers are driving the vehicles, not a mugger in disguise.

It is time they take a look at what they are calling illegal and think about reviewing the motor vehicles act, probably enacted in the 80's, and put the people first.

As for politicians, the advice would be to stop listening to bureaucrats and people of special interests. They don't have to go to people for votes once in a while, the politicians do and people remember when they have been short-changed.

Perhaps they should do what State Minister for Telecomm Tarana Halim did on Sunday. She clarified that the government would not be imposing restrictions on services like Viber and WhatsApp. She said the government didn't have any plan to do so.

She perhaps realised that it was time not to worry about the old-school international call termination money the government used to earn.

It is time bureaucrats, politicians, and businessmen start thinking about the people and check their own backyards. Or else, “Digital Bangladesh” would be just another campaign slogan aimed to fool voters.