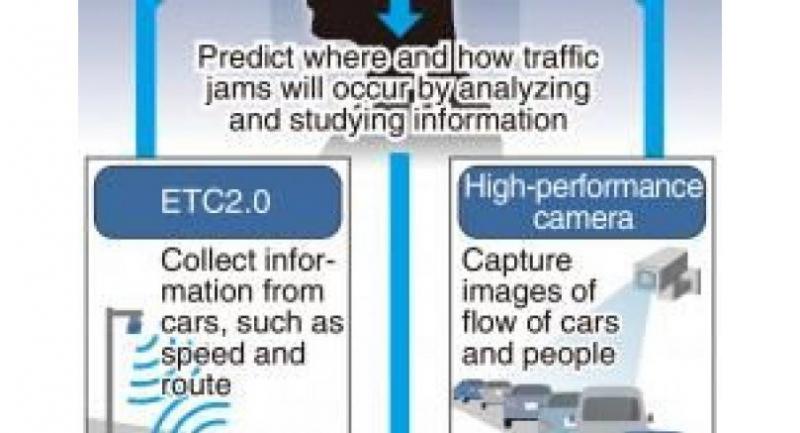 TOKYO - The transport ministry will this autumn start a pilot project that uses artificial intelligence (AI) to alleviate traffic congestion at tourist hotspots.

The project will use traffic volume data collected through a network of cameras installed on expressways, streets and elsewhere to predict locations where traffic jams look likely to occur, which will help ease or even prevent congestion. The Land, Infrastructure, Transport and Tourism Ministry hopes harnessing this data to help drivers avoid traffic jams will boost the tourism industry and revitalise local areas.

After soliciting nominations of famous tourist areas across the nation, the ministry will select two or three locations to implement the project as early as September. The pilot project will be conducted over several years, after which the system is expected to be rolled out and fully implemented across Japan.

Under the ministry’s plan, a network of cameras will be installed at expressway interchanges, major roads and other locations. The cameras will record, in detail, data such as how many vehicles travel in which direction during certain times and seasons. The project will use the next-generation electronic toll collection (ETC 2.0, see below) system installed in vehicles to gather information such as which route was taken, the vehicle’s speed and where the driver had to use the brakes. The system will not identify the individual driver.

Current congestion forecasts mainly focus on expressways and major national roads, and are limited to estimates based on information collected in the past. The new forecasts will be calculated based on a combination of detailed data and past congestion conditions. The system will use AI’s learning ability to deduce formulas to predict under what conditions congestion occurs. It will predict the congestion conditions several hours ahead for specific locations, such as certain tourist facilities and their surrounding areas.

These congestion forecasts will be provided to the local governments and police forces with jurisdiction over the roads. On roads where traffic volumes are likely to increase, local authorities will take steps such as extending the time traffic signals are green and managing traffic by restricting the inflow of vehicles. Information also will be sent to smartphone apps and vehicle navigation systems to urge drivers to avoid congested routes. It also will encourage the use of “park and ride” services, in which vehicles are parked at parking lots and other spaces away from a city center, and the passengers then travel to their destination by train or bus.

According to a transport ministry survey, about 9,000 locations across Japan are prone to frequent traffic jams. Of them, about 20 per cent are in or near popular tourist spots. The ministry hopes practical application of the improved forecasts will help alleviate congestion that can hamper the tourism industry.

The next-generation, nonstop electronic toll collection system was fully introduced in August 2015. The system can collect large volumes of data such as a vehicle’s location information and speed through two-way communication between roadside equipment installed along expressways and national roads, and onboard units and vehicle navigation systems. The Land, Infrastructure, Transport and Tourism Ministry will use the collected data for purposes including alleviating traffic congestion and preventing vehicle accidents. As of the end of July, about 1.94 million vehicles were equipped with the onboard units, which is only about 2 per cent of the about 81 million vehicles owned in Japan.