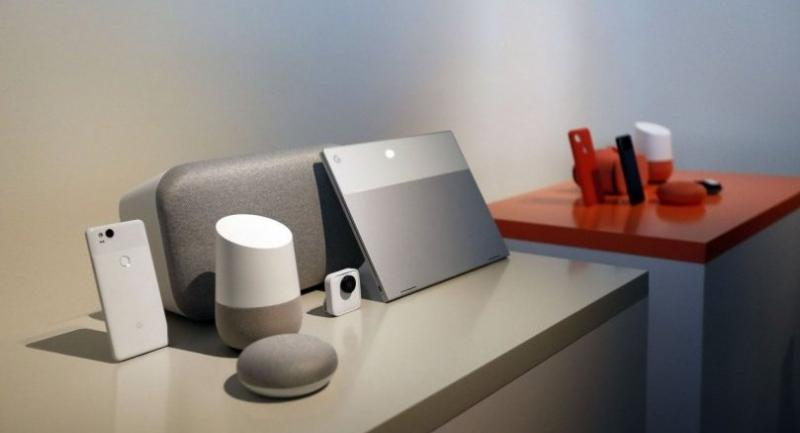 SINGAPORE - Besides a host of new hardware to counter industry giants, Google is focusing on its strength in artificial intelligence.

Ahead of its latest product launch, chatter around Google centred on how it was going to start taking hardware seriously - seeking to create lust-worthy devices to challenge the dominance of Apple and Samsung.

And, while the search giant did unveil a slew of new devices, it made clear its approach to competing wasn't to make phones with nicer screens, faster chips or polished industrial design.

Instead, it is trying to leverage heavily on its competitive advantage: Artificial Intelligence.

Google Assistant, its virtual assistant software powered by artificial intelligence (AI), is on virtually all of Google's new hardware devices announced last week (Oct 4), ever listening and ready to help users with their queries and tasks.

The virtual assistant is at the heart of the expanded range of Google Home speakers, two new Pixel smartphones, and a set of wireless headphones that offers real-time translations in 40 languages. And, for the first time, Google Assistant is on a laptop-tablet hybrid Chromebook.

The only device that did not have Google Assistant, the portable Google Clips camera, also relies on AI - in the form of a chip with on-device AI processing - to automatically snap photos, without human intervention.

The products were announced at the MadeByGoogle event last week in San Francisco.

In his opening address at the launch, Google chief executive Sundar Pichai reiterated his belief that the world has shifted from being "mobile-first" to "AI-first", a philosophy the firm announced last year.

He sees the interaction with computers becoming more natural, thanks to AI.

"Computers should adapt to the way people live their lives, rather than people having to adapt to computers," he said.

Some of the new AI-powered features to debut last week include Google Lens, which picks up relevant information such as dates and contact details from photos. The software was first announced at Google's annual developer conference in May.

Machine learning, a form of AI in which computers learn to be smarter on their own, is also behind the software powering the new Pixel 2 smartphone camera. Its Portrait Mode feature, which blurs the background, relies on a single camera instead of the dual-camera systems required by rival handsets.

The crown jewel in Google's hardware lineup is its Pixel 2 XL and Pixel 2 smartphones.

Not only do they have Google Assistant built in, the Pixel 2 phones also have exclusive features like Google Lens. They are also the only devices that can do real-time translations with the new Google Pixel Buds wireless headphones.

Google's first attempt at a smartphone, last year's Pixel phone, was plagued by shortages due to supply-chain issues. While analysts have estimated that more than two million units were sold, this figure is but a fraction of the units shifted by top smartphone makers such as Apple and Samsung.

Could supply-chain issues continue to affect the new devices, especially as Google is expanding the sales of these phones to new markets, including Singapore (for the Pixel 2 XL)? Gartner analyst Tuong H. Nguyen says that Google would have made adjustments to cater to the additional markets. He added that Google's primary goal is not to sell the most phones, but to showcase the Android platform and the underlying AI features. "This means supply issues are not as dire of an issue for Google as it would be for other phone makers," he said.

Google's hardware chief Rick Osterloh said that the company is very interested in building its presence in the Asia-Pacific region. He noted that the recent US$1.1 billion (S$1.5 billion) deal to bring on board 2,000 employees from Taiwanese phone maker HTC, as well as gain access to its intellectual property, "can really expand our capabilities in the region".

"This (Google hardware division) is a start-up business within the company but we think that we are off to a pretty good start," he said.