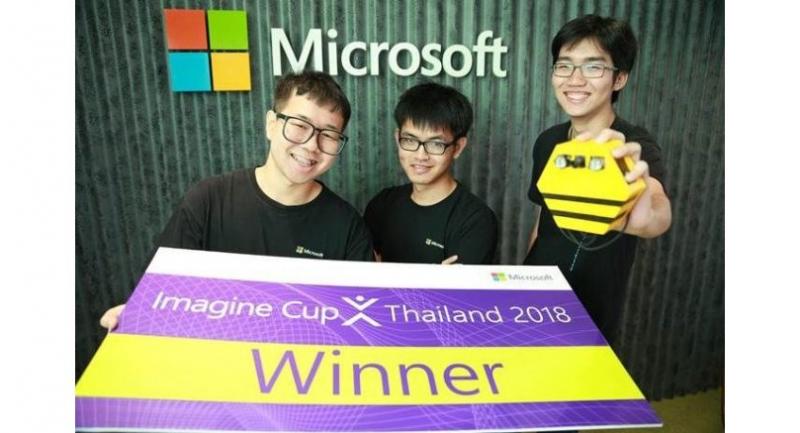 Internet of thing (IoT) beehive management device that monitors and detects problems inside beehives to solve the mystery behind the mechanism of colony collapse disorder (CCD).

CCD is a global phenomenon that occurs when the majority of worker bees in a colony disappear and leave behind a queen, dooming the beehive’s future productivity. The students’ solution could potentially increase the production of the agricultural product significantly.

After settling on the idea of the Smart Hive, they built an IoT device to help beekeepers manage the beehives more efficiently. The device uses cognitive technology to analyse the pattern of buzzing sound inside the hive, detect irregularities, and alert the beekeepers through the dashboard and in-app IM.

BeeConnex team member Boonrit said that bees have a great impact on the natural ecosystem and studies have indicated that without them, the entire ecosystem could collapse. They are also important to the economy, as they are used commercially for large-scale pollination.

“However, beekeepers are currently facing a major threat known as the CCD and this encouraged us to learn more about bee-related issues,” said Boonrit. “People have been studying the disorder for a long time, but technology has never been fully utilised to address this issue.

“We discovered from our installed sensor device that bees send countless patterns of signals with different meanings, called a ‘Bee Dance’. The device later sent the information to cloud computing, Microsoft Azure. It made me realise that this wasn’t only an idea for a competition, but was also a smart way of studying the countless and complicated bee patterns in a short time that could never been done through human hearing.”

“We are honoured to see our idea become something tangible that can contribute to preserving the natural ecosystem in terms of food production from the effective pollination,” said Boonrit. This year’s competition was supported by key partners, Unicef and SiriVenures, who sponsored two special recognition awards that reflected the awareness of integrating technology to support youth education in every sector, said event organisers. Education on the Cloud was sponsored by Unicef, and Smart Living on the Cloud by SiriVentures.

Team BeeConnex will receive a Royal trophy from HRH Princess Maha Chakri Sirindhorn and on April 4 represent Thailand together with inSpectra, the team that won the Smart Living on the Cloud award by SiriVentures in the 2018 Imagine Cup Southeast Asia in Kuala Lumpur, Malaysia.

They will compete with teams from nine countries for a chance to win a trip to the World Finals in Seattle in June this year. The best and brightest teams from across the globe will compete for the title of World Champion, a $100,000 (Bt3.11 million) cash prize and the chance to take home the Imagine Cup.