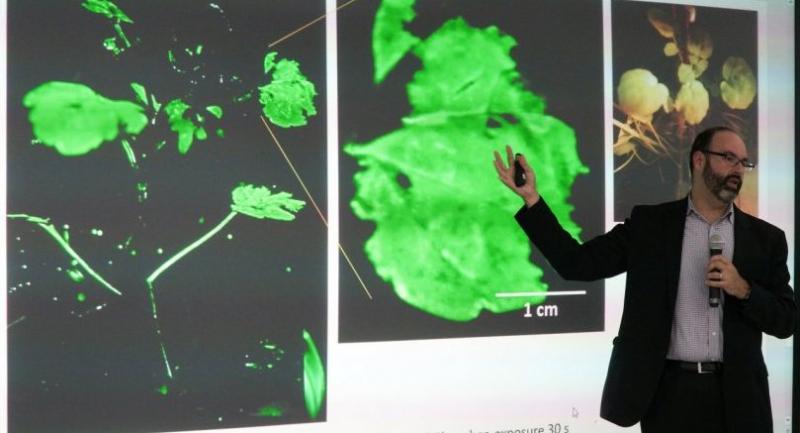 Michael Strano, an American chemical engineer from MIT, presents his research into using nanoparticles to give plants new capabilities in Bangkok.

By Jintana Panyaarvudh
The Nation weekend

SOME engineers are always thinking about how to extract more food production from plants, but for American chemical engineer Michael Strano, plants are something more than just a source of food – they are the starting point of technology.

Calling himself a nanotechnologist, the professor at Massachusetts Institute of Technology (MIT) began asking the question a few years ago whether engineers should start to look at living plants in the same way as he does.

“It's a very new thing for engineers [to think about plants that way]. And it's very different from what we are dealing with in living plants,” Strano told The Nation Weekend  in a recent interview in which he explained how he began his interest in bionic plants almost a decade ago.

Strano is a renowned carbon nanotube scientist who is ranked among the top 1 per cent of the most cited researchers and is known for his groundbreaking findings.

He set up Strano Research Group with a laboratory at MIT. His research focuses on biomolecule/nanoparticle interactions and the surface chemistry of low dimensional systems, nano-electronics, nanoparticle separations, and applications of vibrational spectroscopy to nanotechnology. Plant nanobionics, a new research area pioneered by Strano's lab, aims to give plants novel features by embedding them with different types of nanoparticles.

The group's goal is to engineer plants to take over many of the functions now performed by electrical devices as Strano realised living plants possess many inherent advantages.

Plants can harvest energy through photosynthesis, store energy, gain access to low- energy waterflow or transpiration, adapt to harsh environments, and perform autonomous self-repairs, according to the professor.

“Plants collect a lot of information from the environment and this came as a surprise to me as an engineer," he said.

He said plants know a lot about the environment and keep the information inside and that it's very interesting for him to try to tap into this realm.

“With the techniques we have developed at MIT, we can bridge the gap between what the plants know and what the human can know," he said.

The research conducted by Strano and his team at MIT studies include light-emitting plants. They have made watercress glow by embedding them with specialised nanoparticles.

He has also helped embed spinach with carbon nanotubes to detect explosives and wirelessly relay that information to a handheld device similar to a smartphone.

Another research project involves developing sensors that can be printed on plant leaves to provide alerts on water shortages.

Late last year, the team created glowing watercress through luciferase, the enzyme that gives fireflies their glow. The enzyme makes a molecule called luciferin, which causes the watercress to emit the light.

Another molecule, known as co-enzyme A, helps the process along by removing a reaction byproduct that can inhibit luciferase activity.

The plants can give off dim light for nearly four hours and the brightness equates to around 6 per cent of an LED light.

“The vision is to make a plant that will function as a desk lamp - a lamp that you don't have to plug in. The light is ultimately powered by the energy metabolism of the plant itself," Strano said.

The researchers also demonstrated a crucial part of turning the light off and on through promoters and inhibitors. In daylight, the plant could stop emitting light.

“What needs to be done is we have to wire the switch to something in the environment. It could be temperature or sunlight," Strano added.

This technology could be used to provide low-intensity indoor lighting, or to transform trees into self-powered streetlights, he said.

And his ultimate goal is to make a light source that is powered by nature itself.

“I'll be honest. It would create something beautiful in its function. It is the value of the plants,” the professor said.

His interest in illuminating plants was inspired by Avatar, an American epic science-fiction film. The 2009 blockbuster was about an alien world with alien plants that generated their own light, otherwise known as bioluminescent plants.

“The idea has been making its way into popular consciousness for a long time. Making illuminating plants is a pride that society is eager to see happen," Strano said. Strano was in Bangkok on Monday to present his research into using nanoparticles to give plants new capabilities at the Research & Innovation for Sustainability Centre (RISC) as part of a collaboration between property developer Magnolia Quality Development Corporation Limited (MQDC) and US-based MIT Energy Initiative (MITEI). The partnership aims to slash greenhouse gas emissions from Thai property developments.

After his success in making a watercress shoot glow as a prototype for a living desk lamp, the professor and the centre will work together to research and develop trees that can operate as self-powered streetlights.

Strano has proposed four species of trees for this kind of experimentation — teak hardwood, mango plum, Burmese grape, and Dipterocarpaceae.

They will together conduct a study into which ones are the most suitable, as different leaves have different qualities. Some leaves are very waxy and others have surfaces that make it easier for water to penetrate.

They hope to develop illuminating trees that will be used as lamp posts at The Forestias, a 119-acre green development in Bangna, on the outskirts of Bangkok.

Developed by MQDC, The Forestias is a mixed-use project being advanced under a concept of “sustainable happiness” that integrates natural ecosystems into communities.

Currently, Strano’s glowing watercress is treated at the MIT Lincoln Laboratory, but it is his ultimate goal to develop illuminating trees to serve as lamp posts at the new property when it is scheduled to open in about five years.

For a future generation of this technology, Strano hopes to develop a way to paint or spray the nanoparticles on to plant leaves, so that trees and other large plants can be transformed into light sources.

Also, he aims to develop single treatments that last the lifetime of the leaves.

Strano plans to come back to Bangkok in November, when he hopes to bring a prototype of second generation of the technology to present or treat plants at the RISC lab.

If the research comes to such fruition, light from trees is certainly more economically because it has no energy cost, he said.

"You now have a light source that neither needs to be plugged into the electricity system nor needs a battery. It's a century of light that does not need energy input anymore," he said.

Singh Intrachooto, the chief adviser to RISC, which was established by MQDC, said Strano's work has opened up exciting possibilities for further integrating natural ecosystems into residential communities.

“Making trees glow might sound like science fiction but it may soon become a reality based on what Strano has already achieved," Singh said.

Lighting accounts for about 20 per cent of worldwide energy consumption, so luminous trees could have vast applications with huge environmental benefits, he added.