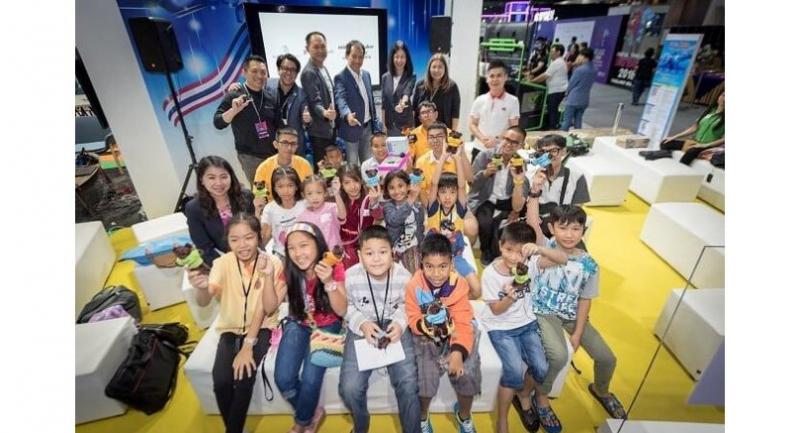 By The Nation weekend

Microsoft and SiriVentures over the past week kicked off “Smart Living with Micro:bit”, Thailand’s first youth competition to develop a new generation of Internet of Things (IoT) pioneers.

It is the country’s first competition in which both general and vocational students (Pratomsuksa 4 to Mathayomsuksa 6) are challenged to come up with creative ideas to facilitate and enhance daily life, and to develop these ideas into tangible projects using BBC’s micro:bit code.

Dhanawat Suthumpun says it is crucial for Thailand to develop strong human capital and promote digital literacy to support the Thailand 4.0 strategy. He says coding is the backbone of digital workforce development as it enhances systems thinking and problem-solving skills, thus developing people’s ability to understand the issues they face and overcome them.

“At Microsoft Thailand, we want future generations to create technologies rather than make use of the technologies,” said Dhanawat.

The initiative aims to support Thai youth by opening the door to limitless learning opportunities through STEM education and careers. That would, in the long run, help them achieve their goals and overcome digital limitations in the digital economy.

The competition is held in partnership with SiriVentures, a capital venture between Thai real estate developer Sansiri and Siam Commercial Bank focusing on full-scale research and development to innovate new property technologies. The partnership’s objective is to give children opportunities to learn digital skills with advanced technologies and to encourage creativity.

Jirapat Janjerdsak, chief technology officer, SiriVentures, said that the mission is bringing technology to develop the well-being of Thai people. It hopes that the Smart Living competition will spark genuine interest and show Thai youth the significant role digital skills play when it comes to enhancing personal well-being, family life and communities.

The winning team of Smart Living with Micro:bit will receive a Bt30,000 prize, while two runner-up teams will get Bt15,000 each.

The competition is open for students from Pratomsuksa 4 to Mathayomsuksa 6 or vocational institutions until October 30. In November, 10 teams will be selected for the semi-final round, and each team will receive a sensor valued at Bt5,000 from SiriVentures to further develop their projects. The 10 selected teams will present their projects from the sensor kit on “Mini Demo Day”, including consultations with specialists, to be ready for final round competition.

By December, 10 teams will present their projects as part of the “Coding Thailand Tournament” competition held by the CodingThailand community with support from Digital Economy Promotion Agency (DEPA).

The partnership was officially announced at Digital Thailand Big Bang 2018, an international digital technology event held by the DEPA.

Previous pilot projects developed by children using coding on micro:bit devices include a statistic collector enabled by a light sensor which can be used for school activities such as library attendance records and student council elections. The project was developed by a group of students from Ban Khlong Sawang Arom School in Nakhon Pathom.

Another pilot project highlight – an automatic toothpaste dispenser powered by a distance sensor – aims to facilitate people’s daily lives. It was developed by a group of students from Debsirin Nonthaburi School.