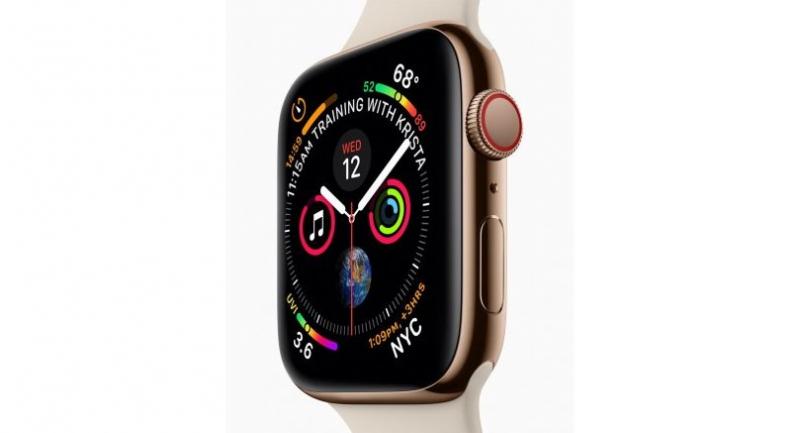 The new Apple Watch comes with redesigns and enhanced features.

Size matters. And the Apple Watch Series 4 comes bigger in both models, a growth from 38-millimetre and 42-millimeters screen to the latest at 40-mm and 44-mm.

The bigger screens come with a redesign that features a stunning display with thinner borders and curved corners to help users to easily – and clearly – see all contents on the screen.

The larger screen allows users to see and do many more things with the watch.

The screen is now 30-per-cent larger while the watch is thinner and lighter, resulting in a better feel for the wearer.

Tuning options for the new screen allows users to personalise the display with their own designs and placement of their favourite, most important, or most frequently used applications on the display screen. There are now up to eight configurations, each of which can be changed at any time and as often as the user wishes.

The display-screen configuration helps users check their information without the need to  tap  the screen.

Users can put up to four ID contacts on-screen and view financial information and activities in graph format, a new addition in Apple Watch Series 4.

It also supports many third party applications, including DeckCom app, which monitors and displays glucose levels, a great boon to diabetics.

The LifeSum app can let users instantly know many calories they are consuming and burning, great for those concerned about their weight.

Other new features include Watch Face, which comes with beautiful animation.

For photographic capability, users can take a live three-second picture as their home-screen photo.

And with the bigger screen, map-lovers can more easily search for routes and details on the watch.

Another useful feature for users is the Electrocardiogram heart rate sensor, with quicker and more frequent measurements from seven to 10 minutes. And another new feature is a user alert that notifies when the wearer’s heart rate is too slow.

It defaults to an average 120-beat high rate and 40-beat low rate, but can be adjusted by the user to fit their personal heart rate.

A new Fall Detection feature is a game-changer that marries the Apple Watch Series 4 to Siri 4.

This feature helps users connect with emergency service and their loved ones if they have a fall-related accident.

Siri will ask whether the wearer is okay or not. Siri is satisfied if the answer is “okay”.

But if there is no response within 60 seconds (perhaps due to losing consciousness), or they respond that they are not okay, Siri will call out to the emergency unit number as well as contact the wearer’s personal emergency number (set in advance) and send an exact location to them. For users over the age 65, the Fall Detection is active by default, but those younger will need to turn on the feature by going to Watch App, then to Emergency SOS and set the emergency contact to help with detection.