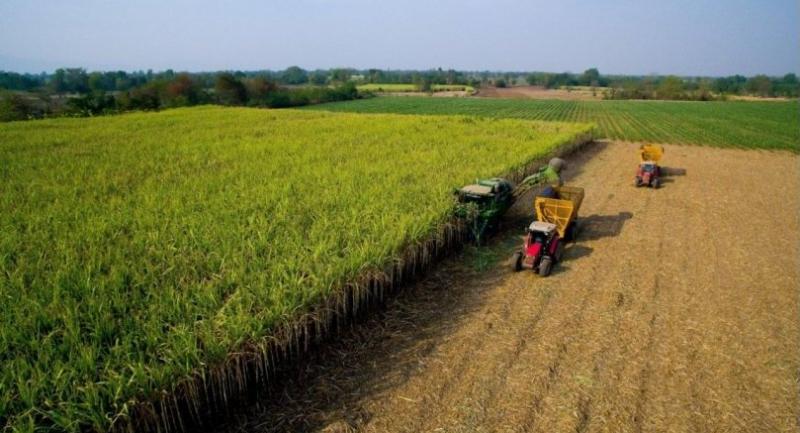 AIMING to strengthen Thailand’s agriculture industry with the use of technologies to do precision farming, government agencies and the private sector have joined hands to launch a two-year pilot project on 2,000 rai.

The objective is to transform sugarcane farming into precision farming through increasing the yields of one of the country’s most economically important crops.

The industrial crop is transformed in Thailand and around the world into sugar and bioenergy. According to a breakdown by country of sugar exports done by the website World’s Top Exports, Thailand plays an important role in the world market as the second largest sugar exporter, with a 9.4-per-cent market share in 2017.

Meanwhile, according to Thailand Sugar Annual 2018 by Global Agricultural Information Network of the USDA Foreign Agricultural Service, sugar production in Thailand between 2018 and 2019 is forecast at around 14.1 million tonnes, or about a 3-per cent increase from the previous year.

The three-party research collaboration is expected to improve both the yield and the quality of Thailand’s sugarcane, with the research results then applied to also improve the country’s other economic crops.

Nectec, IBM, and Mitr Phol will work together over the next two years in researching and implementing of innovative technologies, especially artificial intelligence (AI), internet of things (IoT), satellite remote sensing, and hyper-local weather forecasting data to accomplish precision farming in pilot areas of a 2,000-rai (320-hectare) sugarcane farm owned by Mitr Phol.

Narong Sirilertworakul, president of the NSDTA, said the agency has committed to strengthening the country’s R&D, especially for the food and agriculture sector that creates several billion baht a year in economic value.

“NSTDA plays a role as a driving force of national science and technology capability, based on our belief that technology will help ensure the country’s sustainable growth and global competitiveness,” said Narong. This collaboration with IBM and Mitr Phol is to create a new data-driven era of agriculture, starting with sugarcane farming.”

Nectec provides its strength in local technologies, including IoT-weather sensors used to collect local data for forecasting local weather. IBM offers its industry-leading AI and data analytic capabilities, as well as the world’s most accurate weather data from The Weather Company. Mitr Phol allows the pilot project to be implemented on its 2,000 rai of sugarcane farms nationwide as well as providing its research and resource team to work in the fields.

The project is a game-changing move towards a modern farming practice with the use of precision farming for Mitr Phol, and also for the entire agriculture landscape in Thailand, said Klanarong.

Thailand is the first country in Asia Pacific in which IBM is bringing its IBM Watson Decision platform for agriculture business.

“Mitr Phol is committed to the continuous innovation and adoption of best practices to increase the productivity of sugarcane farming, for the sustainability of all stakeholders,” said Klanarong.

There are four components to the research – an AI engine that has been largely customised for agriculture, satellite data, data from The Weather Company and data from IoT devices.

Kathryn Guarini, vice president of industry research for IBM Research, said that the decision support process for Mitr Phol’s farming will comprise five different models. The first is a weather model for operations, including timing for spraying and fertilising the farms.

Second is the crop health model that pinpoints locations to scout on the sugarcane farms. Third is the soil moisture and temperature model to guide irrigation and fertiliser application, while the fourth is a pest and disease risk model for remediation of stem borer and other bio-threats. The final guiding input is the yield and quality projection.

The IBM Watson Decision platform for agriculture business consists of a merging of data from The Weather Company; satellite-based remote sensing data and IoT local sensing; locally collected data such as soil, topography and climate; and users inputs about farm locations, crop types and plant data.

“We were looking for the right partner since we need a use-case to implement the research collaboration,” said Guarini. “Why Thailand and why Mitr Phol? It is because of we have the right partners, both Mitr Phol and NSTDA as well as Nectec.”

The project will pilot the Agronomic Insights Assistant, which is being developed by IBM Research and is based on the IBM Watson Decision Platform for Agriculture and IBM PAIRS Geoscope. The pilot launch will be in the middle of this year, and take place on three sugarcane farms of up to 1 million square metres.

It works with the precise forecast models from the Weather Company. This data is then combined with local sensing technology that has been customised and enhanced for sugarcane in Thailand by NSDTA and Nectec, and rich agronomic domain knowledge from Mitr Phol including real-world insights on water and nutrient stress, pest and disease risk, agriculture production yield and crop quality index.

Farmers may be granted access to information that can help them access and manage risk easily, optimise productivity and ultimately increase their crop yields.

With insights up to two weeks in advance and alerts on pests and disease such as stem borers and white leaf, along with hyper-local, short-term, and seasonal water forecasts, it is expected that farmers will be able to proactively plan specific actions such as irrigation, fertiliser application, and pesticide spray to fight against yield-loss threats.

Chai Wutiwiwatchai, Nectec’s director, said that it will initially implement IoT weather stations on three 600-rai farms with two node stations per farm, and with nine to 18 IoT sensors in each node station. It will take around one month to implement the IoT sensors throughout the farms.

Patama Chantaruck, vice president for Indochina expansion and managing director at IBM Thailand, predicts the collaboration will transform Thailand’s sugarcane farming. The move is part of the company’s mission to equip Thai sugarcane farming with relevant insights and to support the government and business community as it seeks to strengthen the country’s competitive capabilities in agriculture as one of the country’s key industries.

“The combined strengths of NSTD and IBM in research and advanced technologies leveraging Big Data, analytics, AI, and IoTs, added to the domain expertise of Mitr Phol, will represent the next frontier of smarter agriculture in Thailand and transform the way one of the most traditional industries work,” said Patama.

The Weather Company, acquired by IBM, accesses huge data from 2.2 billion points on the planet, using almost 300,000 personal weather stations globally to create 162 forecast models. It also has atmospheric data from 50,000 flights per day and 15 million pressure readings from mobile devices. With this data, it can offer precision for 100 times greater coverage with accuracy and update forecasts every 15 minutes.

“IBM Cognitive AI is not just for analysis, but for prediction. With the use of images from satellite remote sensing, it can offer insights into the water and nutrient stresses, pest and disease risk insights, and a crop quality index for farmers,” said Patama.

She said this collaborative mission is to develop, to validate, and to scale the impact of the use of innovative technologies. The resulting data could be used to increase productivity and revenue per field and to reduce loss.

A little help from AI

“AI is not going to replace jobs but will improve and help with tasks. We bring the best technology to be used for the best thing in the country - which is agriculture,” said Patama.

IBM Research looks forward to building similar public-private partnerships across all industries to address the planet’s greatest challenges, she said.