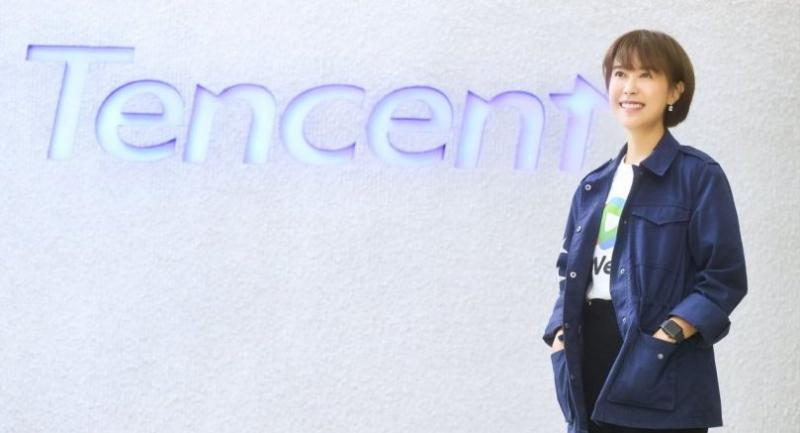 TENCENT, operating in Thailand for the past 20 years, has been busy expanding its service platforms. Three years ago the Chinese technology giant added the music streaming service JOOX and in 2018, the games platform PUBG.

In its latest venture, Tencent Thailand has this year added video steaming, with the aim of soon becoming the market leader.

Tencent in China first launched its video steaming platform under the name Tencent Video in 2011 and began producing original content the following year. Its content comes from three sources – its own content, hiring content producers to supply the platform, and buying from content service providers.

In China, there are around 500 million active users per month, and around 89 million people pay a subscription fee.

Kanokporn Prachayaset, head of business development and marketing at Tencent (Thailand), said that this is the first country outside China to bring Tencent’s video streaming service to market under the name WeTV. Because of Tencent’s readiness in both content and infrastructure, the local team convinced the company to launch the new service in Thailand.

“We found that Thais spend a lot of their daily time on different digital services, and saw the huge opportunity to offer a video streaming service to fill out our portfolio,” said Kanokporn.

But why Thailand first? Because the two countries have cultural similarities and Chinese content is a favourite of Thai consumers, she said.

Thailand is also interesting in terms of market size, with over 50 million internet users. Most Thais are early adopters who welcome giving strong feedback to new services.

She stressed that the goal is to drive WeTV to become the No 1 video-streaming platform, matching the position Tencent enjoys with its other services in Thailand. For 2019, the aim is to push WeTV to the No 3 spot in the local market.

To achieve these goal, Kanokporn said that the company’s marketing strategies include use of social media such as Facebook and Twitter, search engine optimisation (SEO), and YouTube. Tencent Thailand’s promotions will also make use of JOOX and Sanook and key opinion leaders (KOL), or influencers, to promote WeTV in Thailand.

“We will use JOOX as media to offer not only audio and banner ads, but also to offer bundled packages with music and video for VIP subscribers. We will also increase channels on Sanook to facilitate easier access WeTV at wetv.sanook.com,” said Kanokporn.

As the newcomer in the market, it intends to be aggressive in its plan to become No 1 in the future because of its strength in content and in its team.

For content, Tencent Video in China has been strong in original productions. For example, Tencent in China invested the equivalent of around Bt500 million to produce the EverNight series, as original content. The series could gain 5 billion views within a month of launching in China. This kind of content will be exclusive for WeTV users.

Tencent Thailand will use simulcast strategy to bring key content from China to Thai users instantly. For example, it also has variety programs, especially realty TV shows. One popular show is Produce Camp 2019, which Tencent bought under licence from a South Korean company to offer to Tencent Video’s users. Thai users will be able to watch this reality show just one day behind its fans in China.

In terms of teams, Tencent Thailand has strong teams and products in the Thai market, helping it in cross-content and cross-platform activities.

Although Chinese content will be the main fare for WeTV at the beginning, the company aims to go after the mass-market consumers, Kanokporn said

“Therefore, the company will expand to offer many kinds of content, including from Thailand, South Korea and the US,” she said.

“For Thai content, we worked with a local content partner. Now we have at least one official local partner - that is One31, which will offer an exclusive re-run of Thai series. Since early this year there are four titles from One31 on WeTV. We will bring content from Korea and the US to offer on WeTV in May. We have bought content licences and are creating Thai subtitles. We are also bringing premium grade content from Tencent Video to create the Thai sound.”

Initially, the target users of WeTV will be early adopters in Bangkok and in the large cities, with these customers aged between 24 and 40. It will later expand to offer content to cover users aged above 40, with select titles offering Thai sound tracks, Kanokporn said.

She said there are many video streaming service providers in Thailand, and that is a good sign, indicating the readiness of the market.

“The opportunity we see is that there is no significant Chinese content,” she says. “Consumer behaviour is now changing and they have more choices so they will switch between video streaming platforms to follow their favourite content,” she says. “So, stickiness of content is important. Our content includes programs with many episodes and which often run longer than shows in countries.

In Thailand, she said, internet users spend an average of 9 hours and 11 minutes online everyday. They watching all kinds of content, including broadcast TV, TV on demand, video streaming, for around three hours and 44 minutes. There is scope to increase the time consumers spend watching content.

WeTV has four content categories: series, variety, anime, and movies. Series account for 80 per cent of the total, but by the end of 2019, they are expected to fall to around 60 per cent. Movies account for 20 to 25 per cent, and variety and anime productions will make up the rest. Chinese content makes up 70 per cent of the total with Thai shows filling out the rest. In May, two more shows will be added, from South Korea and the US. By the end of 2019, Chinese content will drop to around 45 to 50 per cent.

“Next month, we will have around 150 titles and this will increase to 300 titles by the end of this year. WeTV has been available since January this year, but it will be officially launched in June,” said Kanokporn.

She said the beauty of WeTV is that it not only provides video steaming for Thais but will also bring in Thai content.

This content will come from providers who partner with WeTV to distribute on Tencent Video’s platform to capture the huge Chinese market as well.