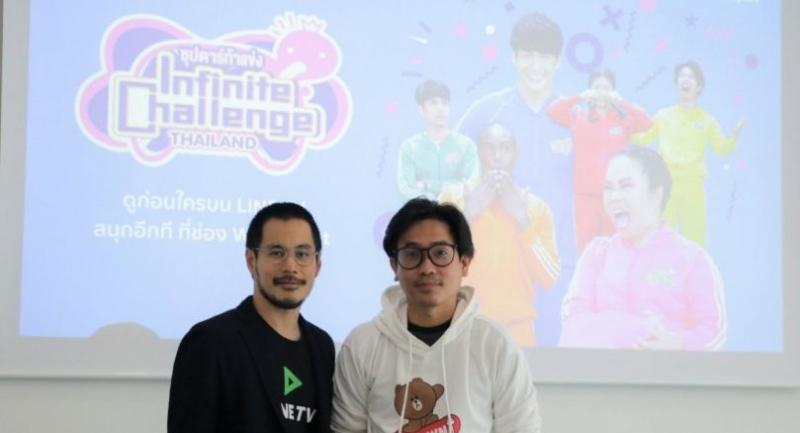 IN ITS drive to become the leading online TV player in Thailand, Line TV will this year target people upcountry, most of whom are now mainly watching traditional offline TV.

Kawin Tangudtaisak, the content business director for Line Thailand, said most people in Thailand are still watching broadcast TV even though online-streaming TV is gradually growing, especially among the 20 million-strong urban population. Those urbanites are the core base audience of Line TV, while another 40 million Thais are viewed as a largely untapped opportunity.

“We are studying other new business models, even freemium, as many partners would like to use the freemium model with us. But we are still studying the options. We believe an advertising model would offer the best service for users,” said Kawin.

The sector is seeing added competition, each with different strengths, he said. For example Netflix came in with a subscription model while Line TV adheres to the advertising model, offering free content.

Line TV has strong partnerships with many content producers and benefits from having the core Line platform to drive marketing for Line TV.

“Our penetration is around 50 per cent of total broadcasting TV audiences,” said Kawin.

The Thai market is big enough to allow a variety of content. Line TV has deployed a “recommendation engine” to personalise content to match user preferences. Kawin said having more players in the market is a good thing as it creates an ecosystem.

“The market is big enough [to encourage] a variety of content from many platform, so we do not see everyone as competitors,” said Kawin.

It focuses on retention and play views, rather than the time spent, reflecting that it is a long-form platform and has a strong user base that ensures strong engagement. The user base grew by at least 50 per cent per year for the last four years, while play views grew at 90-100 per cent through that time.

“Content numbers are not our focus – we focus on quality and on optimising content. The volume of available content has not increased, but play views for each [video] is heavily growing,” said Kawin.

“We will not annoy users in the middle with mid-roll ads,” said Kawin. The content also includes sponsorships and tie-ins.

Despite having its own large platform for marketing, the Line app, Line TV also has a marketing budget for both online and offline channels in order to drive awareness beyond engaged online audiences.

“The online channel is mostly for engagement and marketing performance, while offline is to drive awareness and to drive original content,” said Kawin.

Original content currently makes up less than 10 per cent of total content on Line TV. Still, it plays a role as an as innovation lab for Line TV and its partners to trial and test new content before launch on the broadcast TV platform.

People can watch Line TV on Apple TV, and it will soon be on Android TV and Chromecast. It will also be integrated into Line Today this year.

“We do not know what people’s viewing pattern will be in the future, said Kawin, but we believe it will be more online. Our goal is to keep up to it,” said Kawin.

For this year, he added, Line TV’s aim is to become the online TV player leader in Thailand, and that requires that it sign up people upcountry, most of whom are still watching offline TV.

Its partnerships with giant variety content producers such as Workpoint Entertainment is a key part of Line TV’s movement in this direction.

For the first time that Line TV and Workpoint have worked together to create original content, they came up with “Infinite Challenge Thailand”, which will first go on-air through Line TV and then have its second run an hour later on the Workpoint broadcast TV channel.

The hook-up with Workpoint aims to expand Line TV’s user-base upcountry. This is the first original content collaboration with Workpoint, a company very strong in variety content and popular among upcountry audiences.

“Original content does not mean only trying out new kinds of content ranging from drama to variety,

but also means trying out new ways of presenting the content,” said Kawin.

Instead of being shown as re-run after first being broadcast on a traditional TV platform, Infinite Challenge Thailand will first air on Line TV, and only then appear on broadcast TV an hour later.

The move offers a chance to expand beyond core drama-loving audiences to those who enjoy variety, including attracting more male users.

The collaboration with Workpoint creates a new kind of on-air model that expands both user bases and advertising opportunities, he emphasised.

“Since our core content is drama, which is mostly watched by females, this year we are trying to expand to variety and animation content to attract more male users.

“This means more users upcountry, and that creates an opportunity to attract additional advertising brands to the platform,” said Kawin.

He confirmed that Line TV is exploring new kinds of content – such as entertainment, variety and foreign series – in order to engage new user groups.

“Now, over 80 per cent of content on Line TV is drama, while entertainment, variety and music is together around 20 per cent,” he

said. “Most drama audience members are women, and so now around 65-70 per cent of our users are female.

This move is also to extend our audience to include more men through entertainment and variety content. We aim this year to increase our male audiences to reach 40 per cent,” said Kawin.

Meanwhile, Chalakorn Panyashom, chief operation officer of Workpoint Entertainment Plc, said that even “Infinite Challenge Thailand” is not truly long-form content – but it is the kind of content that can retain users.

Workpoint’s variety content can boast several million play-views and most of its variety audience are regular customers. Its collaboration with Line TV aims to expand the platform’s content to reach a lot more users, said Chalakorn. It would eventually attract brands to advertise as the content expanded from offline to online.

“Infinite Challenge Thailand” has 15 episodes its total, and four episodes have already aired.

It is on air every Friday, on Line TV first at 8pm and at Workpoint TV channel at 9pm.

The companies refuse to disclose the budget for original content creation.

They have both invested in the series and are sharing revenues, but will not disclose further details.