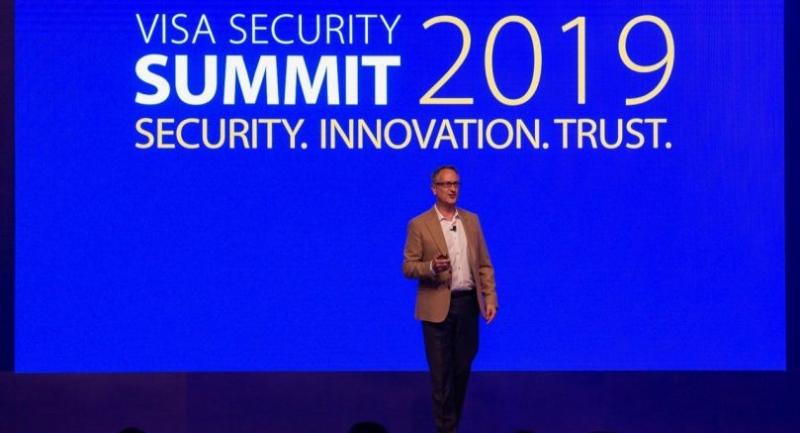 Chris Clark, the regional president for Asia Pacific at Visa

In bid to outsmart the cheats, Visa puts range of technologies to work amid enthusiastic embrace of credit by Thais

WITH the goal of halving the fraud rate by 2025, Visa aims to lead a new phase of payment security by collaborating with stakeholders in the payment ecosystem and continuing efforts to protect “deep value”, enhance data collection and empower consumers.

The development of digital payments has spawned a proliferation of data that attracts an increasing number of cybercriminals. According to Juniper Research, fraud is projected to cost retailers worldwide US$130 billion (Bt4 trillion) over the next five years.

Chris Clark, the regional president for Asia Pacific at Visa, said that innovation, data and technology will power the next generation of fraud management solutions.

“We are on the cusp of the fourth payment revolution,” said Clark.

Visa’s three-fold security strategy is to empower the consumer; protect, harness and devalue data by investing in intelligence and technology; and secure the future of payment.

“Our vision is to see a significant reduction in the fraud rate by 2025,” said Clark.

The core components of the payments ecosystem are data, people and infrastructure, he noted.

The digital era has led to an astonishing proliferation of data and data endpoints for criminals to exploit. The most challenging attacks exploit human vulnerabilities rather than technological ones.

has helped financial institutions prevent an estimate $25 billion (Bt771 billion) in annual fraud, and made the global payment ecosystem

safer for both retailers and consumers.

When data analytics is used with authentication methods like biometrics to verify the cardholder, payment security is further enhanced.

Last year, Visa processed more than 127 billion transactions between merchants and financial institutions on VisaNet and employed AI to analyse 100 per cent of the transactions, each in about one millisecond.

Asia Pacific generates $18 trillion (Bt555 trillion) in payment volume, about 23 per cent of Visa’s global business. However, huge cash opportunities of 55 per cent or around $6.1 trillion remain in the region, given that electronic payments make up about 45 per cent of transactions.

Joe Cunningham, head of risk in Asia Pacific for Visa, said almost every government in Asia Pacific is focused on driving a digitalisation agenda, reducing the reliance on cash and cheques.

This has created huge opportunities for digital payment innovations. The payment industry generates significant amount of data, some of which is sensitive and attractive to criminal organisations.

Asia Pacific’s e-commerce sales are expected to reach $3.5 trillion in 2021, further cementing the region as the biggest market in the world for online shopping. Technologies like tokenisation will help to ensure no token details are transmitted during an online transition, said Cunningham.

This token allows payments to be processed without exposing actual account details that could potentially be compromised.

“We envisage a future from passwords, where consumers benefit from the advanced technology to authenticate their identity. A future with less fraud and less friction,” said Cunningham.

However, Clark added, we are now in the fourth revolution in payment, in which payment is driven by emerging technologies including quantum computing, artificial intelligence (AI), internet of things (IoT) and biometrics.

Some of these have already been implemented in public transportation, media, telecommunication, retail, healthcare, banking and payment. These innovative payment methods also led to the evolution of fraud in the fourth evolution as well.

In the lingo of security experts, the fourth evolution of fraud is experiencing emerging threat vectors.

Southeast Asia offers the largest opportunity for cash payment in Asia Pacific. E-payment will be available through many forms including plastic cards, but also watches, smartphones and IoT devices.

According to Gartner consultancy, by 2021 the number of connected devices worldwide will be roughly 25 billion, causing issuers and retailers to respond to consumer demand for greater convenience through access and use of payment account information across multiple channels and devices.

“Visa is helping to safeguard the payment ecosystem through a multilayered approach to payment data safety, with solutions and services based on global security standards, protecting and devaluing sensitive data,” said Clark.

The use of 21 billion connected devices by 2020 potentially creates a $600 billion cybercrime business, with the average data breach costing $1.2 million, according to Kaspersky Lab.

This is also known as the chaining attack landscape.

Visa’s security strategy is to empower consumers, banks and merchants; to invest in intelligent ecosystem assets; to establish a governance process; and to promote a strategic vision for security to be a catalyst for growth, enabling responsible innovation and enhanced convenience, said Sriraman.

He added that Visa had already launched its Asia Pacific Security Roadmap in many countries, including Thailand.

The security roadmap is a set of market-specific initiatives and goals backed by Visa rules, mandates and incentives. It is also collaboratively agreed with clients and regulatory bodies so as to drive improvements in the security of the industry.

“According to our security roadmap, we are now on track with tokenisation and are moving forward to the card-on-file tokenisation by 2022,” said Sriraman.

Thailand is among the countries mostly actively engaged in digital payment, led by e-commerce and transit.

Meanwhile, most Thais were using contactless payment for transit.

According to the latest Consumer Payment Attitude Study by Visa, 42 per cent of Thai consumers were carrying less cash than in the previous two years. This represents a huge increase compared to the 26 per cent recorded in the previous study. It demonstrates a willingness to go digital, with 73 per cent of Thai respondents citing convenience as the top reasons they increased their cashless payments, especially when using cashless payment for transit.

New trends and digital payment solutions are inline with the Thailand National e-Payment agenda, pushing the Kingdom a step closer to a cashless economy, including through transit solutions, e-commerce solutions, digital solutions, tokens and mobile payments.

Visa has a transit programme that is dedicated to the expansion and acceleration of the use of debit, credit and prepaid accounts for mass transit fees.

Robert Walls, Visa’s head of hub consumer products & digital solutions in Asia Pacific, said the company over the past year helped to launch contactless transit solutions in 20 cities across 12 countries, with more than 150 projects currently underway.

“If people start using a contactless card to pay, it would support the wider adoption of contactless payments and set the foundation for future ways to pay. Getting around by public transpiration is something a lot of people do every day,” said Walls.

Major cities have enabled open-loop payment cards for public transport including London, Sydney, New York and Singapore. The project with Singapore was one of Visa’s largest implementations for contactless acceptance for transit, with 30,000 acceptance points.

The first step to enabling the use of credit and debit cards at the turnstile is to enable open-loop payment, Walls added.

The open-loop payment in transit refers to the acceptance of payment methods that are not proprietary to the transportation network in question. In Bangkok, the Rabbit card is an example of a “closed-loop” payment system because it can only be used for travel on the BTS Skytrain.

These payment methods often require a customer to convert their money to transit-only funds stored in the card, which is then used to travel. For example, if a tourist comes to Thailand and wants to travel on the BTS, he or she will need to buy a transit fare card to board the train. This requires waiting in line to buy a card at the ticketing machine and having the necessary cash on hand to pay the fare. The customer also needs to carry the additional card with them on the ride.

Visa’s role in transit is about providing the right standards and solutions to make it easier for transit operators to accept contactless at their fare gates, and importantly, it is to fully transform the passenger experience.

“We have dedicated speci