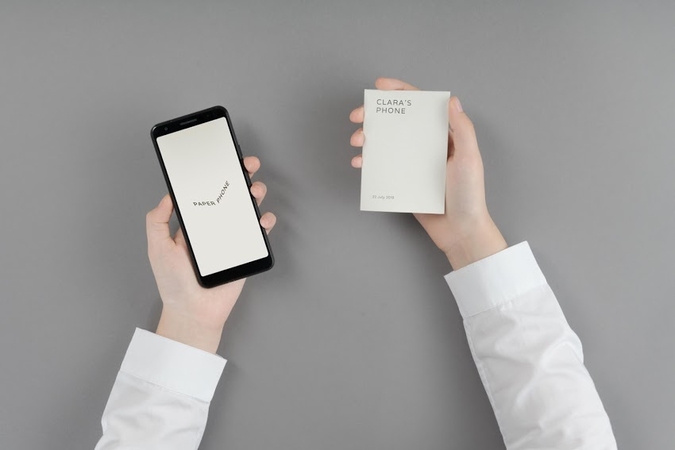 You can't take a selfie on Google's newest phone. It doesn't even make calls.

It's just a piece of paper, printed with a few pieces of information at home and folded into a rectangle. With a few snips of a scissors, it can hold a credit card.

The Paper Phone is part of a new package of "digital well-being experiments" that the company says is aimed at giving users a "digital detox." It arrived the same week Google launched its latest phone: the $800 Pixel 4, which has built-in radar technology that can be controlled by a user's hand motions.

Google's Paper Phone is the latest in a string of offerings attempting to grab the attention of an audience weary of the ever-expanding presence of tech in our lives, as well as the feeling of being chained to your phone.

Wellness advocates suggest putting your phone in the other room while you sleep. There's a movement toward "No-Tech Sundays," when participants abandon their tech for the day. Resorts, start-ups and wellness gurus are cashing in on the unplugged travel trend with a variety of digital detox events.

There is even a "National Day of Unplugging."

The Paper Phone project is one of Google's open-source experiments that also includes a phone wallpaper that counts how many times a day a user unlocks their device, and a "desert island" program that gives users access only to their most essential apps for 24 hours.

Some of the movement to unplug stems from research around the effects of tech on our health. The World Health Organization released new screen time guidelines for parents earlier this year based on research that found behavioral and developmental issues in children who spent hours in front of a screen. Other research has found connections between smartphone usage and anxiety.

Tanya Goodin, a London-based digital well-being evangelist, says Google's project reminds her of when Big Tobacco targeted consumers concerned about their health with low-tar cigarettes to keep them as customers.

"Instead of children's games, they have to look seriously at the fact that we've been rats in this big Silicon Valley experiment," said Goodin. "The fact that we can't disengage from technology is exactly because of the things these companies have been doing for years."

Former Google design ethicist Tristan Harris launched a tech ethics nonprofit originally called Time Well Spent and now known as the Center for Humane Technology. Harris has argued that the tech industry is engaged in a "race to the bottom of the brain stem," and that tech design should enhance - not endanger - humanity. The "time well spent" concept has been widely referenced by Silicon Valley executives, including Facebook CEO Mark Zuckerberg.

Zuckerberg said at a company event Friday that he has told his team to optimize meaningful interactions between users on the platform, rather than maximizing spending time on it, according to a tweet from Flipboard editor Ken Yeung.

Paper Phone isn't Google's first attempt at using paper products to explore the digital world. In 2014, the company introduced Google Cardboard, a way to view virtual reality applications on a smartphone. Google said it shipped 5 million pairs of the low-tech glasses in 19 months.

Anthony Martinez, a cyber-navigator at the Chicago Public Library, tweeted his approval of Google's most recent foray into the two-dimensional world.

"I'm all about minimalism and this is fantastic and feels like an art project in just the right way," he said.