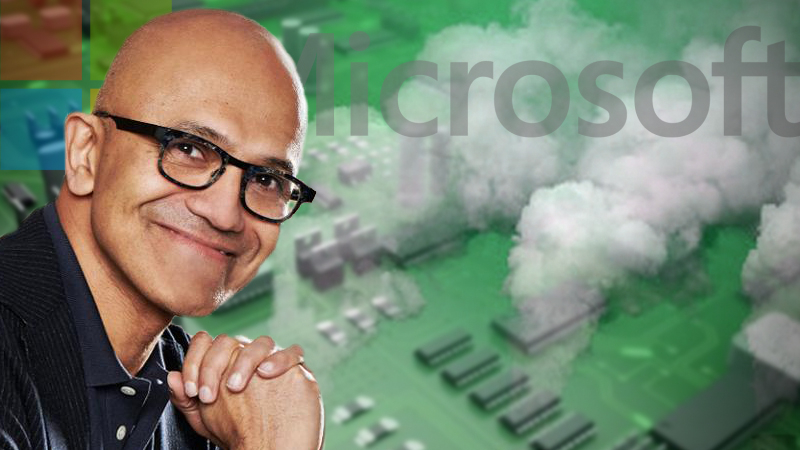 REDMOND, Wash. - Microsoft on Thursday announced plans to remove more carbon than it emits by the end of the decade, a pledge that addresses the climate change crisis more aggressively than many of its tech rivals.

The software giant, which announced the initiative at a news conference at its Redmond headquarters, also plans to remove all the carbon emissions it has generated since its founding in 1975 by 2050.

"The scientific consensus is clear," Microsoft chief executive Satya Nadella said at an event Thursday morning at Microsoft's headquarters. "The world today is confronted with an urgent carbon crisis. Each of us is going to need to take action, and that includes business."

Microsoft's initiative goes a few steps beyond what crosstown rival Amazon announced in September. The e-commerce giant, which competes with Microsoft in the booming business of cloud computing, said at the time it would implement strategies to be at net zero emissions - removing as much carbon as it produces - throughout its business by 2040.

Working to remove carbon emissions to prevent further global warming is "far and away the biggest challenge, I think, that humanity has ever been presented with," Microsoft President Brad Smith said in a meeting with journalists Monday in New York.

One point on which Microsoft and Amazon are aligned is that they both will continue to provide artificial intelligence and machine learning technology to energy companies to help them better pinpoint oil deposits for extraction.

Activist employees at Amazon have protested their employer's work with energy companies, so much so that a lawyer in the company's human resources group raised the possibility of termination if they didn't adhere to its external communications policy. Last month, an anonymous author who claimed to work for Microsoft lamented the company's work with energy firms in an article in Logic Magazine. The author recounted a work trip to Kazakhstan to help the state-owned energy company work with Chevron to extract oil from a field near the city of Atyrau.

"Microsoft executives aren't going to give up on the billions of dollars to be made from Big Oil, especially if it helps them win more of the coveted cloud market," the author wrote.

Microsoft declined to comment on the article, but Smith said in an interview Thursday that the company intends to continue working with oil and gas companies, in part to help them move to cleaner forms of energy.

"We are a company that wants to solve problems by working with people and by helping them make the transitions the world needs to make, rather than by cutting them off and denying them tech writ large," Smith said.

Microsoft previously pledged to continue working with the U.S. military after some employees protested some contracts with Pentagon, saying it wanted to be part of the discussion about using technology responsibly. Microsoft applied the same logic to its decision to work with oil and gas companies.

"We are consistent philosophically, especially when it's a vertical sector that can be part of a solution," Smith said.

In working toward being carbon-negative by 2030, Microsoft is counting emissions it produces, such as exhaust from its fleet of cars and trucks, as well as emissions it indirectly causes, such as those that come from electricity it uses, the production of the materials in its buildings, and the power customers consume when using its products, such as the Xbox game console. But Microsoft won't count the emissions from energy produced by oil and gas companies that its technology helped find.

To achieve its goal, Microsoft plans to have its entire fleet of vehicles run on electric power by 2030. It will adopt so-called negative emission technologies including soil carbon sequestration and bioenergy with carbon capture and storage to remove emissions it's created. The company also committed to investing $1 billion over the next four years in new technologies to help address the climate change crisis.

And while Microsoft said it will continue to disclose its carbon footprint, Smith said the company hasn't committed to an independent audit of the progress against its goals. The company will push for better standards to measure and report carbon emissions and removal.

"Whether it actually needs to be audited, we'll see," Smith said.

He declined to disclose the cost of the new carbon-reduction initiative.

Other tech giants have dialed up efforts to reduce their emissions, including Apple, which last spring said that 21 manufacturers in its supply chain vowed to obtain all their electricity from renewable sources, a number the company now says is up to 44.