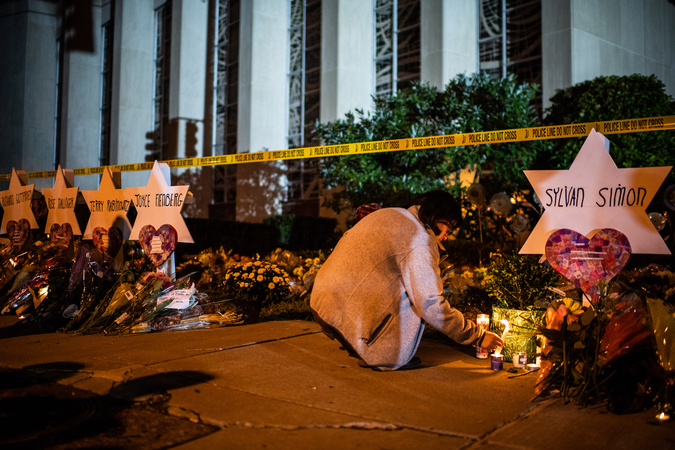 A woman leaves a candle in front of the Tree of Life Synagogue in Pittsburgh after a deadly attack there in 2018. MUST CREDIT: Washington Post photo by Salwan Georges

On the 75th anniversary of the liberation of the Auschwitz-Birkenau death camp last week, incidents of anti-Semitic vandalism, harassment and assaults were reported in the United States.

As survivors, heads of states and members of Jewish organizations gathered at the site where the Nazis systematically murdered more than 1.1 million people, a letter declaring that Jews are fake and part of the "Synagogue of Satan" was sent to synagogues in Seattle, Springfield, Virginia, and the District of Columbia.

Swastikas were painted on City Hall in Pendleton, Oregon, and a home in Boulder City, Nevada. Walls inside an apartment building in New York were marked with profanity-laced graffiti targeting Jews.

For the Anti-Defamation League, one of the oldest U.S. organizations that collects data on hate and anti-Semitism around the world, such incidents have become increasingly common in the United States - so much so that it launched a new online project this week to track them.

"We are doing this because anti-Semitic incidents are more prevalent nationwide and we felt it was essential to provide immediate and reliable data to the public," said Jonathan Greenblatt, the group's chief executive and national director.

"This tool allows people, whether it's the general public or journalists or students or law enforcement, to see the activity that has taken place, not just around the country but in localities potentially nearby," he said.

The group collects information about anti-Semitic incidents from sources such as media reports, law enforcement and direct reporting at one of its 25 offices across the country. According to Greenblatt, the staff will investigate and validate the information it publishes as part of the new project.

"We are now using the tracker because the pace of incidents has grown so dramatically," Greenblatt said.

In 2017, anti-Semitic incidents in the United States increased 57%, according to the group, the largest single-year increase the group has seen and the second-highest total in its history. In 2018, the overall number of incidents declined slightly but remained at near-historic levels, the group says.

The online activities of far-right and neo-Nazi groups have also spiked.

"This online activity is spilling out into the real world - not just through terrorist attacks, but brazen recruitment operations across campuses and other public spaces, providing contact information for whites to join local chapters of neo-Nazi groups and train for what they see as a pending race war," said Rita Katz, executive director of the SITE Intelligence Group, a private firm that tracks online extremist activity.

In a December report, SITE found that the far right has had a presence on the Telegram messaging app since September 2016. But a majority of the 374 groups and channels sampled for the report were created on or after March 15, 2019, the date that a white supremacist killed 51 Muslims in two mosques in Christchurch, New Zealand.

Katz noted that college campuses are "a recurring factor" in many of the incidents listed in the tracker.

"This is not surprising as we at SITE have been seeing neo-Nazi and white supremacist groups like Feuerkrieg Division, The Base, and Atomwaffen Division place special emphasis on flying campaigns at college campuses throughout the country," she said.

Greenblatt said the tracker was critical in a charged environment in which people are worried that the government doesn't appear to have a solution and fear that stereotypes and scapegoating of Jews are spread easily. But he said his group faces challenges - extremist violence often happens in cities where it does not have offices and most people don't report incidents.

Adding to this is the realization that memories of the Holocaust are fading, and survivors and witnesses are dying.

"People forget the most horrible act of the 20th century that showed what can happen when hate goes unchallenged," Greenblatt said.