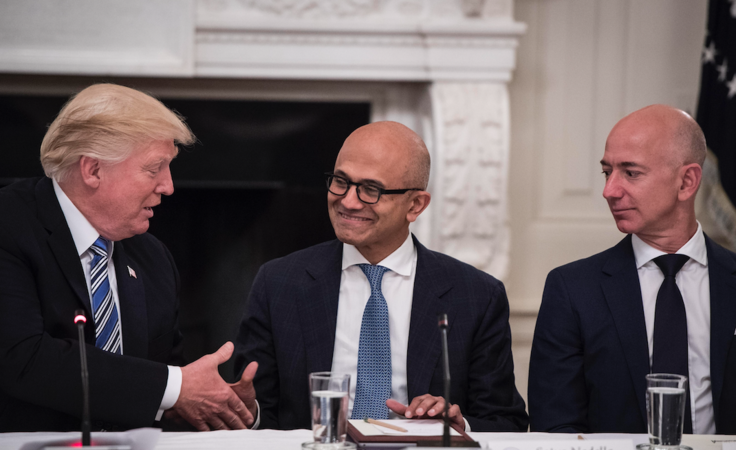 Seattle-based computing giant Microsoft has criticized its rival Amazon for employing "sensationalist and politicized rhetoric" in a lawsuit over a lucrative military contract known as JEDI, according to court records made public Monday.

Microsoft's comments, included in a motion to partially dismiss a protest filed by Amazon, paint the clearest picture yet of how the company will defend its surprise win in the Joint Enterprise Defense Infrastructure procurement. Microsoft was awarded the contract in late October after an 11th-hour intervention by President Donald Trump prompted Defense Secretary Mark Esper to reexamine the Pentagon's approach.

For weeks, Amazon has charged that Microsoft's allegedly inferior cloud computing technology could not possibly have won in a fair competition. It argues that the results were skewed by "repeated public and behind-the-scenes attacks" from Trump and is seeking to depose Esper and the president, among others. (Amazon founder Jeff Bezos owns The Washington Post.)

Microsoft's attorneys said Amazon's claims are not supported by evidence and should be rejected.

"Without a compelling case on the merits of a traditional bid protest, [Amazon Web Services] tries to make this case all about President Trump," Microsoft's attorneys wrote in a filing unsealed Monday.

Amazon "has alleged zero facts - nothing - plausibly indicating that any DoD official involved in the JEDI procurement, at any level, was actually influenced by the alleged anti-Bezos statements in any way," they wrote.

"AWS believes that all of its protest grounds are valid, and that it's important that the numerous evaluation errors and blatant political interference that impacted the JEDI award decision be reviewed," Herdener said in an email.

Trump's interest in the contract came after a long-running legal and lobbying campaign by Oracle, whose federal business is threatened by the broader shift to cloud-based computing systems.

The company's lobbying operations seemed to bear fruit on the eve of a planned contract award by the Pentagon last summer. Trump said in a July 18 news conference that he had received "tremendous complaints" from companies that compete with Amazon, specifically naming Oracle, IBM and Microsoft. Around that time an Oracle lobbying document labeled "A Conspiracy To Create A Ten Year DoD Cloud Monopoly" reached the president's desk, The Post and CNN reported.

In late July during his first week on the job, Esper launched a review of the Pentagon's broader approach to the JEDI contract, telling The Post that he wanted to "take a hard look" at the contract and that he had heard complaints from the White House and members of Congress.

As part of that review, Esper met with at least one person, whose name was redacted, who was closely involved in the bid evaluations, according to court records. Those briefings covered the JEDI program and the different options available to the Pentagon, a Defense Department spokeswoman said Tuesday.

Then, on Oct. 7, Esper completed paperwork recusing himself from the competition, forwarding major decisions on the contract to Deputy Defense Secretary David Norquist. His office has said the decision to recuse was made "out of an abundance of caution" to avoid any concerns regarding his impartiality, because his son was employed with one of the original bidders.

Despite Esper's meetings with procurement officials, the Defense Department has insisted that his review was strictly limited to the broader strategy around JEDI and that it in no way touched on the evaluation of specific bids.

In its motion to depose Trump, the company is seeking information related to comments recounted in a recent book by a former speechwriter of former Defense Secretary James Mattis, retired Navy Cmdr. Guy Snodgrass, who wrote that Trump had sought to "screw" Amazon out of the contract and that Mattis had demurred. His claims have not been independently verified.

Amazon's bid protest has relied primarily on the president's own public statements. The company cited a February 2016 campaign rally in Texas, in which Trump said Amazon would "have problems" if he were elected. The company is also citing a Fox News segment against Amazon as well as Trump's statement that he had heard "tremendous complaints" from Amazon's competitors.

In its motion to dismiss, made public Monday, Microsoft called the president's comments irrelevant, arguing that none of them directly mention the JEDI procurement.

Microsoft further argued that Amazon should have raised its concerns over the Defense Department's handling of the contract at the time that they occurred, rather than waiting for a contract to be awarded.

Also this week, two nonprofits, Protect Democracy and Citizens for Responsibility and Ethics in Washington, filed briefs in support of Amazon's request to depose Trump.

"The plaintiffs in this case have credibly alleged that the President personally intervened in a government-contracting process to punish a critic," Protect Democracy wrote in its legal brief. "If true, this would be a grave abuse of power in its own right that would be broadly chilling to anyone who wishes to exercise their right to dissent against the government."

The Defense Department is expected to file a separate brief in the coming weeks explaining its position.