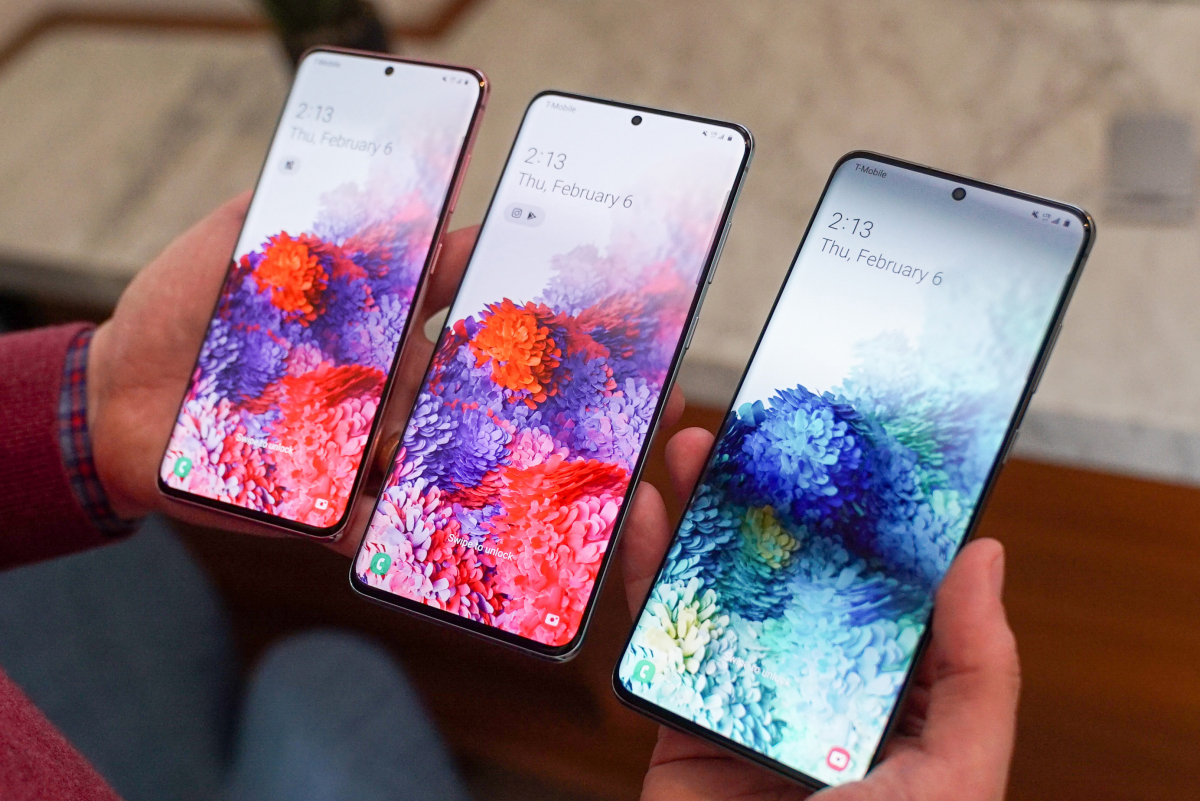 At its "Unpacked" event here on Tuesday, the world's largest smartphone maker introduced a new model called the Galaxy S20 that touts ultrafast 5G and a camera with enough zoom for a spy. A second new smartphone called the Galaxy Z Flip opens and closes like a flip phone from 2003, using a cutting-edge folding-screen technology.

I had a chance to spend a little time with the Galaxy S20 ahead of its launch. The flip phone, teased during an Academy Awards commercial, is expected to be announced later on Tuesday.

Samsung's new phones showcase some sexy, if largely unproven, technology. But first we need to talk about runaway prices. Last year's Galaxy S10 line started at $750. Just two years ago, the world gasped when Apple unveiled its top-of-the-line iPhone X for $1,000. But this year's entry-level Galaxy S20, which goes on sale Feb. 21, starts at $1,000 - and then jumps to $1,200 for a model called the S20+. Then it hits $1,400 for the Z Flip and a version called the S20 Ultra with a maxed-out screen and camera features.

Sure, advanced technology can be expensive, and Samsung isn't the only one raising prices. But the reality is that phonemakers are also desperate to prop up profits at a time more of us are choosing to just hold on to our old phones. Between 2016 and 2018, the average Galaxy S phone owner waited an additional four months to upgrade, according to Samsung. And for good reason: Recent smartphones have proved durable while Silicon Valley and South Korea's best new product ideas have felt more like iterations.

Samsung's pitch with the Z Flip, which arrives in stores Friday, is a smartphone that finally doesn't look just like last year's phone. Opened up, the Z Flip looks like a standard Samsung smartphone with a 6.7-inch screen. But then it folds down the middle without a seam, thanks to a special kind of folding OLED-screen technology. The appeal is that a smaller phone is easier to hold and stuff into a pocket. With a slightly stiff hinge, you can also sit the phone at a 90-degree angle to use it as two screens, or to take a selfie without a tripod or extended arm.

There's also a retro appeal to having a phone that snaps shut. Motorola, which made the iconic Razr flip phone in 2003, also recently tried bringing it back as a folding-screen smartphone. Samsung tried this folding-screen trick last year with its Galaxy Fold, which switched between a tablet and skinny smartphone. But that $2,000 phone was marred by durability concerns and shipped to customers with a list of warning about how to not break it.

Samsung says it improved the durability of the Z Flip with a new kind of ultra-thin bending glass to protect it from scratches. (The Fold used plastic.) The Z Flip hinge has new fibers that Samsung says will keep dust and particles out. The company says the phone can withstand being opened at least 200,000 times - which sounds like a lot, but also means your smartphone comes with fixed lifespan.

For its 2020 flagship Galaxy S line, Samsung is trying to create a sense of upgrade urgency. It employed a hyperbolic naming convention, skipping from last year's S10 right over the numbers 11 and 12 and all the teens to the S20. Take that, iPhone 11 . . . I guess?

The S20 lineup is also the first from Samsung to include support for 5G network service in all its models. That sounds like a reason to upgrade, but may be less than you'd think in the United States. I didn't get to test the S20's 5G capabilities in my preview of it, because I wasn't in an area of San Francisco with 5G service. Chances are, you also don't live or work in an area covered by 5G yet, either. Even in Manhattan, for example, Verizon's coverage map shows it only works in a few blocks and parks. Everywhere else, you get 4G LTE service or less, depending on your carrier.

(Also, buyer beware: The entry-level S20 model doesn't support a kind of 5G technology used in the United States by Verizon networks, so loyal Verizon customers should only consider the S20+ and Ultra models.)

You might justify buying a phone that supports 5G now as future-proofing. Or you could just wait another year for when the technology is improved. Perhaps by then apps and services will have invented some truly killer uses for the network tech on a smartphone, beyond faster movie downloads and gaming.

The tech leap we can actually use in the S20 is a new camera. All flagship phones these days have multiple lenses and improved night photography. So Samsung doubled down on a different skill in its camera war with Apple: zooming.

The specifications here are ludicrous. Both the S20 and S20+ can zoom up to 30 times, compared with 10 times on an iPhone 11 Pro. On the S20 Ultra, the zoom goes all the way up to 100 times. It's enough to photograph the pupil in the eye of someone standing 10 feet away - or to snap Alcatraz Island while standing on a pier in San Francisco a mile and a half away.

This much magnification is impressive on a phone. Samsung accomplished its zoom feat by using new high-resolution sensors for its cameras. Most phones shoot 12 megapixels. The S20 and S20+ both capture up to 64 megapixels. That records any scene in more detail and lets the phone crop in on areas to simulate a zoom lens. The S20 Ultra sensor goes up to 108 megapixels. (Did I mention that these specs are ludicrous?)

On top of that, the S20 Ultra also has a periscope. Really: It's hidden inside and expands sideways with a mirror to provide four-times optical zoom, similar to technology we've seen from Samsung rival Huawei.

Many photo buffs don't think twice about spending a few hundred extra bucks on a camera. But I have serious questions about how all of this will perform in the real world. During my hands-on time with the S20, using all that zoom felt a bit like trying to press an elevator button with a 5-foot pole. You have to hold super still or prop the phone up against something. And for all of us who aren't professional spies, how often do you actually need to zoom in that much?

The S20's camera has one other useful trick up its sleeve: A mode Samsung calls "Single Take" does the shooting for you. Just hold up your camera for 10 seconds, moving around to different interesting angles. Then the phone uses artificial intelligence to pull out up to 14 of the best still shots and clips. I would have called this "Blowing Out Birthday Candle" mode.

There is one final bit of good news: If these features and prices sound a bit like overkill, Samsung will also be selling last year's still-excellent Galaxy S10 line for $150 off. That means you can get one for as little as $600, and you won't need a zoom lens to see all the money you saved.