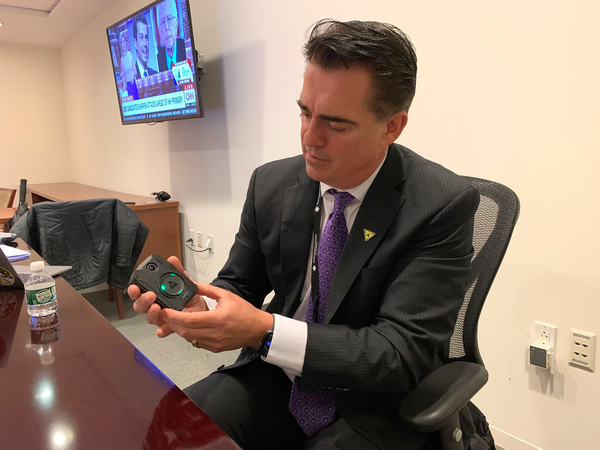 Rick Smith, founder and CEO of Axon, which makes most of the wearable cameras used by U.S. police departments, demonstrates the new Axon Body 3 camera. MUST CREDIT: Washington Post photo by Tom Jackman

The term that keeps coming up is "game changer."

Axon, the largest supplier of body-worn cameras for police in the United States, on Tuesday rolled out 1,000 new cameras for the Cincinnati Police Department that have live-streaming capability. This will enable officers on the street to show dispatchers or commanders a crisis situation in real time and allow rescuers to find an officer who is down or lost.

The system will automatically activate the camera as soon as a gun is drawn, a shot is heard or a Taser is powered on.

The cameras will not have facial-recognition capability, Axon founder and CEO Rick Smith said in an interview, and access to both the live-streamed video and the archived footage will be tightly controlled. To solve the problem of massive amounts of data piling up, the footage will be stored in a computing cloud maintained by Axon and Microsoft, Smith said.

The software accompanying the cameras will enable officers to receive transcripts of the audio in the footage, and the cameras will film in 1080p, greatly improving the quality of still images often used by police in investigations.

Police officers are typically the first on the scene of a crime in progress or a structural collapse. "To have the ability to access that camera in real time, and live-stream what the officer is seeing, that's amazing," said Lt. Stephen Saunders of the Cincinnati police. "That will be a tactical advantage in high-stress situations like an active shooter. Or maybe the officer can't get to their radio. The dispatch center can access it and see what's going on there. That's a game changer."

Smith added that "your commanders and support staff can have a much greater sense of what's really happening" at an unfolding crisis. He envisioned officers turning on their cameras and saying "watch my back" or "I need help" to a dispatcher.

"The person in dispatch can watch and can deploy other officers," Smith said. "We think that's going to be a game changer."

Though body cameras have spread widely among police departments in recent years, both as a means of improving transparency and also for documenting potentially controversial encounters, suspicions that they may be used for more-aggressive police monitoring have not abated. "The centralized live-streaming of body cameras would instantly super-charge the surveillance powers of the authorities," the American Civil Liberties Union's Jay Stanley wrote in 2016. "It raises the prospect of abuse, and will create significant chilling effects."

But Smith says he does not want to create the conditions for "creepy surveillance stuff." Besides securing the cloud and expecting that police departments will tightly limit access to both live and archived footage, Smith created an AI and Policing Technology Ethics Board to review Axon's proposed uses of artificial intelligence and new technology. Among the members are Barry Friedman, a New York University law professor and founder of the Policing Project, which explores thorny issues and focuses on police accountability. He credited Axon for being "incredibly attuned to ethical considerations," and his board has produced papers on facial recognition and automated license plate readers.

Live-streaming police video "has pluses and minuses," Friedman said. "On the plus side, it's possible being able to stream video can make policing more effective and more safe. If someone is contemplating use of force, it might help to have a supervisor in his or her ear. On the other hand, body cameras go into sensitive places. With streaming, it won't just be the officer, but somebody else. There have to be serious limits as to whom the video is streamed."

Putting another set of eyes and ears in a tense situation is a possibly groundbreaking option for police. "Part of the problem in policing, we've got individuals out there by themselves who have a lot of discretion," Friedman said. "Part of the reason they have discretion is there are no alternatives. In serious situations, they might prefer to have better guidance, and we might reach better resolutions."

With facial recognition, Smith said, "I came to realize there are Fourth Amendment issues. Should we be scanning the face of everybody who walks in front of a police officer? I don't know yet."

The cameras can be turned on remotely if needed in an emergency, Smith said, but officers will be able to turn them off at their discretion. Police will be able to seek video from the public through an Axon portal, and the new FirstNet dedicated wireless network for first responders should provide the bandwidth for police to use all this new technology without glitches.

The Axon software will have AI for face detection, not facial recognition, Smith said. This will enable officers to quickly find parts of video that have people in them and also to more quickly redact faces when footage is needed for wider dissemination. Smith said this will cut officers' search times by up to 80 percent. The AI also will allow the transcription of audio portions of a stream, and the AI may be able to incorporate license plate recognition or driver's license scans to increase chances of solving crimes. The cameras have 4G LTE connectivity to cell networks and a GPS.

Smith said one key goal is to greatly reduce the time officers spend writing reports, to get them back on patrol. "It makes it easier to create your records," Smith said. "Over time, we can mine more insights from that data" to study the effectiveness of the camera.

The impact of body cameras, before live-streaming, is unclear. A recent review of body-worn camera research by the Center for Evidence-Based Crime Policy at George Mason University found that the cameras "have not had statistically significant or consistent effects on most measures of officer and citizen behavior or citizens' views of police." But Smith cited one 2016 study that said complaints about police behavior dropped 93 percent in six jurisdictions in Europe and the United States after the cameras were introduced.

Axon is not the first to offer live-streaming to police. Visual Labs, a newer Silicon Valley start-up, offers body-camera software for smartphones using Android operating systems but does not have some of Axon's features.

Axon is packaging its new body camera as part of an "Officer Safety Plan" for $200 per officer per month, Smith said. The bundle includes the camera, equipped with four microphones for greatly improved audio, the software for the camera and its footage, unlimited storage space in the Axon cloud, a Taser weapon and unlimited Taser cartridges. Axon also makes Tasers, the electronic weapon that launches two darts connected to the Taser and uses the electrical circuit to temporarily disable a person.

The fact that the camera activates when a weapon is drawn or when a sound is received through the Shot Spotter gunshot-detection technology should cause more shootings to be recorded. Saunders said officers sometimes don't have time to reach for their body-camera button during a fast-moving incident, but now it will turn on automatically.

"I think it will bring officers great comfort," Saunders said. "If they're out on the beat, they know that someone can find them if they need to. Having that sense of safety is not a no-brainer, it's a cost, but the cost of not doing it can be even greater."