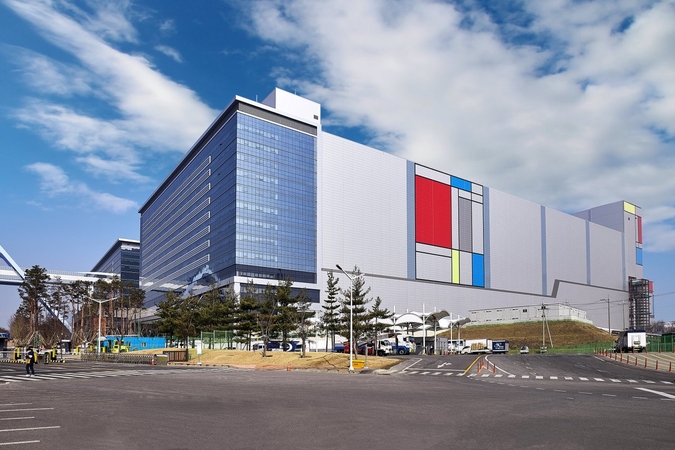 South Korean chipmakers have started to be concerned about a looming slowdown in demand for chips and impact on production in the wake of an unexpected spike in the number of COVID-19 infections across the country, according to industry sources on Thursday.

“So far, the company is not facing any difficulty in running the production lines as usual, but it is worrisome that signs of demand slowdown from set makers are looming as the situation gets worse and longer,” said an official at Samsung Electronics.

The comment came as Samsung announced the world’s top memory provider has kick-started a new production line in Hwaseong, Gyeonggi Province, Thursday, dedicated to producing chips using 7-nanometer process node and below on the strength of extreme ultraviolet lithography technology.

Samsung said the V1 line, which broke ground in February 2018, began test wafer production last year and is scheduled to ship out its first products in the first quarter.

Samsung heir Lee Jae-yong visited the facility to mark its kickoff, according to the company.

It was expected that the impact of COVID-19 would be limited to chip production due to the industry’s mid- and long-term preparations to ensure stable material procurement and supplies.

Even during the extended Lunar New Year holidays in China, the memory plants by Samsung and SK hynix there operated without interruption.

Rather, there were positive forecasts suggesting that the outbreak would limit chip supply in the long run and therefore help raise chip prices.

But as the COVID-19 outbreak continues to worsen both in China and Korea, affecting the chipmakers’ workforces, the companies have grown uneasy about its potential impact on the industry.

SK hynix said about 800 workers at its headquarters in Icheon, Gyeonggi Province, 70 kilometers south of Seoul, have been self-quarantined as a precautionary measure to prevent the spread of the novel coronavirus within the workplace.

The chipmaker discovered on Wednesday that an entry-level recruit who was being trained on the job in Icheon had been in close contact with the country’s 31st COVID-19 patient in Daegu.

The company, however, said those measures were not affecting its factory operations.

Some raised questions about Samsung’s ramp-up at its NAND flash plant in Xian, China.

Due to withdrawals of semiconductor equipment engineers for the second NAND flash line at Samsung’s Xian factory, the new line’s operations would be hampered, which would affect its overall supply, said a report by KTB Securities report.

Samsung denied the claim, saying: “The ramp-up process itself is on its way as scheduled, although there are some difficulties with the local workforce. The ramp-up amount wouldn’t affect overall supply anyhow.”