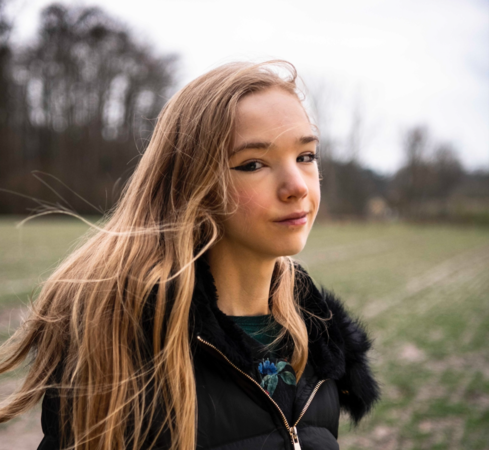 Naomi Seibt poses for a portrait near her home in Munster, Germany. Seibt, 19, uses YouTube to denounce "climate alarmism," countering the arguments of young climate activist Greta Thunberg. MUST CREDIT: Photo for The Washington Post by Sebastien Van Malleghem

For climate skeptics, it's hard to compete with the youthful appeal of global phenomenon Greta Thunberg. But one U.S. think tank hopes it's found an answer: the anti-Greta.

Naomi Seibt is a 19-year-old German who, like Greta, is blond, eloquent and European. But Seibt denounces "climate alarmism," calls climate consciousness "a despicably anti-human ideology," and has even deployed Greta's now famous "How dare you?" line to take on the mainstream German media.

"She's a fantastic voice for free markets and for climate realism," said James Taylor, director of the Arthur B. Robinson Center for Climate and Environmental Policy at The Heartland Institute, an influential libertarian think tank in suburban Chicago that has the ear of the Trump administration.

In December, Heartland headlined Seibt at its forum at the U.N. climate conference in Madrid, where Taylor described her as "the star" of the show. Last month, Heartland hired Seibt as the young face of its campaign to question the scientific consensus that human activity is causing dangerous global warming.

"Naomi Seibt vs. Greta Thunberg: whom should we trust?" asked Heartland in a digital video. This week, Seibt is set to make her American debut at the Conservative Political Action Conference, or CPAC, a high-profile annual gathering just outside Washington of right-leaning activists.

If imitation is the highest form of flattery, Heartland's tactics amount to an acknowledgment that Greta has touched a nerve, especially among teens and young adults. Since launching her protest two years ago outside the Swedish parliament at age 15, Greta has sparked youth protests across the globe and in 2019 was named Time magazine's "Person of the Year," the youngest to ever win the honor.

The teenager has called on the nations of the world to cut their total carbon output by at least half over the next decade, suggesting that if they don't, "then there will be horrible consequences."

"I want you to panic," she told attendees at the World Economic Forum in Davos, Switzerland, last year. "I want you to feel the fear I feel every day. And then I want you to act."

Seibt argues that these predictions of dire consequences are exaggerated. In a video posted on Heartland's website, she gazes into the camera and says, "I don't want you to panic. I want you to think."

Seibt says her political activism was sparked a few years ago when she began asking questions in school about Germany's liberal immigration policies. She says the backlash from teachers and other students hardened her skepticism about mainstream German thinking. More recently, she said that watching young people joining weekly "Fridays For Future" protests inspired by Greta helped spur her opposition to climate change activism.

"I get chills when I see those young people, especially at Fridays for Future. They are screaming and shouting and they're generally terrified," she said in an interview. "They don't want the world to end."

Seibt said she does not dispute that greenhouse gas emissions are warming the planet, but she argues that many scientists and activists have overstated their impact.

"I don't want to get people to stop believing in man-made climate change, not at all," she said. "Are man-made CO2 emissions having that much impact on the climate? I think that's ridiculous to believe."

Seibt argues that other factors, such as solar energy, play a role - though the amount of solar energy reaching Earth has declined since the 1970s, according to federal measurements. A slew of peer-reviewed reports, from scientific bodies in the U.S. and elsewhere, have concluded that greenhouse gas emissions are the dominant cause of warming since the mid-20th century, producing a range of devastating effects from massive marine die-offs in South America to severe wildfires in Australia and sinking ground in the Arctic.

In addition to climate change, Seibt echoes far-right skepticism about feminism and immigration. The German media have described her as sympathetic to the nationalist Alternative for Germany (AfD), the biggest opposition party in parliament, whose leaders have spoken of fighting "an invasion of foreigners." Seibt says she is not a member of AfD - she describes herself as libertarian - but acknowledges speaking at a recent AfD event.

Her path to Heartland began in November with a speech at EIKE, a Munich think tank whose vice president is a prominent AfD politician. By then, Seibt was already active on YouTube, producing videos on topics ranging from migration to feminism to climate change. In the audience was Heartland's Taylor. He said he immediately recognized her potential and approached her about working with Heartland.

Founded in 1984 and funded largely by anonymous donors, Heartland has increasingly focused on climate change over the past decade. Its staff and researchers have ready access to the Trump administration, and one of the institute's senior fellows, William Happer, served as a senior director on the White House National Security Council between September 2018 and 2019.

An emeritus professor of physics at Princeton University, Happer has repeatedly argued that carbon emissions should be viewed as beneficial to society - not a pollutant that drives global warming. During his time with the Trump administration, he sought to enlist Heartland's help in promoting his ideas and objected to a U.S. intelligence official's finding that climate impacts could be "possibly catastrophic," according to documents obtained by The Washington Post.

Why would an American think tank want to get involved in German politics? Because it worries that Berlin's strong stance on reducing greenhouse-gas emissions could be contagious, according to a recent investigation aired on German television.

For two decades, Germany has been a leader in pressing other nations to curb carbon output and shift to renewable energy. Though it is falling short of its ambitious goals, Germany has pledged to cut its greenhouse gas emissions this year by 40% compared with 1990 - and by up to 95% by mid-century.

In December, during the Madrid climate conference, two undercover staffers from the nonprofit investigative newsroom CORRECTIV approached Taylor and claimed to work for a wealthy donor from the auto industry who wanted to give Heartland a half-million euros. Taylor took the bait and followed up with a three-page proposal outlining a campaign to push back against German efforts to regulate emissions.

"These restrictive environmental programs are largely unnecessary," says the document, a copy of which was obtained by The Post. "Worse, other nations - including the United States and European Union nations - are increasingly being influenced by unwise German policy."

The proposal described Seibt as "the star" of a "Climate Reality Forum" organized by Heartland during the Madrid talks. With "over 100,000 people viewing her talk on climate realism," the proposal said, Seibt was well-positioned to fight German climate policies.

"Funding for our Germany Environmental Issues project will enable Heartland to provide Naomi with the equipment and the sources she needs to present a series of effective videos calling attention to the negative impacts of overreaching environmental regulations," the proposal says.

CORRECTIV aired its report on Heartland earlier this month on German TV. Taylor dismissed the report, saying, "Heck, I would have spoken with them if they told us who they were, and the answers would have been pretty much the same."

The report included secretly filmed footage of Seibt, who struck back with her own video response. Invoking Greta, she said, "To the media, I have a few last words: How dare you?"

Despite echoes of Greta's style, Seibt has objected to the comparison.

"The reason I don't like the term anti-Greta is that it suggests I myself am an indoctrinated puppet, I guess, for the other side," she says in one video. Asked whether she meant that as a criticism of Greta, Seibt says: "That sounds kind of mean, actually." She added: "I don't want to shame her in any way."

Taylor said the tendency to associate Seibt with Greta is "kind of natural" - and benefits Heartland's message.

"To the extent that Naomi is pretty much the same, just with a different perspective, yeah, I think that it's good that people will look at the two as similar in many ways," he said.

Still, Seibt has a long climb to reach the level of global attention lavished on Greta. While Greta measures her social media following in the millions, Seibt counts slightly under 50,000 YouTube subscribers.