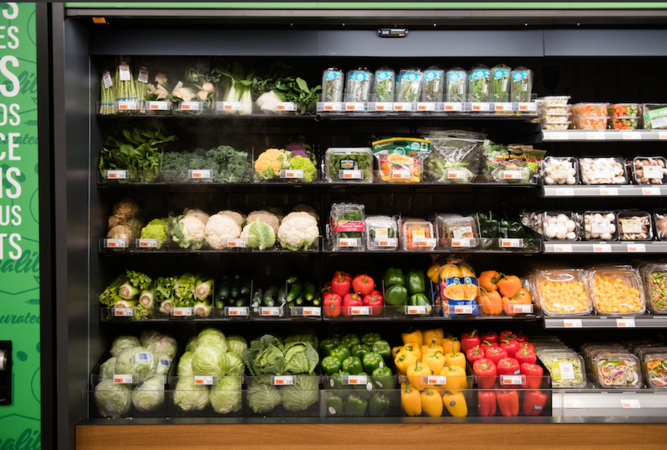 nterior of the new Amazon Go Store in the Capitol Hill neighborhood of Seattle on Feb. 24, 2020. MUST CREDIT: Chona Kasinger/Bloomberg.

Amazon.com Inc. is taking aim at the urban grocery market with a larger version of its cashierless Go convenience store.

The company on Tuesday is set to open the first Go Grocery, located in Seattle's Capitol Hill neighborhood, not far from the online retailer's headquarters. The store is about five times the size of a typical Amazon Go - meaning it can accomodate shopping carts - and carries baked goods, meat, produce and household items.

Amazon is betting a frictionless checkout experience will help it grab a bigger share of the $800 billion U.S. grocery market, now dominated by Walmart Inc.

The Go Grocery stocks about 5,000 items, compared with 500 to 700 in a typical Go store, said Cameron Janes, who oversees the Go project along with several other brick-and-mortar experiments. The selection includes non-food staples like paper towels and laundry detergent but stops well short of the array offered at a traditional grocery store. Amazon's Whole Foods markets carry tens of thousands of products.

Like the 25 existing Amazon Go convenience stores located in Seattle, Chicago, San Francisco and New York, Go Grocery uses cameras and sensors to track people and note what they took off the shelf. Shoppers are charged when they exit. But unlike the early stores, Go Grocery uses newer versions of the system capable of identifying produce without wrappers for each apple, cabbage or pineapple. That makes stocking easier and lowers costs in an industry with notoriously tight margins.

"We can pretty much handle everything" stocked by a regular grocer, Janes said of the latest technology.

He showed off grab-and-go food, coffee and baked goods from local purveyors. The store uses the same meat suppliers as the Amazon Fresh grocery delivery service, he said, and shares some organic produce and fish suppliers with Whole Foods. Unlike the high-end organic grocer, Go Grocery stocks items like Coca-Cola and Big League Chew bubble gum.

Amazon leased the retail space at 610 E. Pike Street in Seattle several years ago with the intention of using it for the first Go store. Given a broad mandate to shake up physical retail, the Go team originally planned to build a checkout-free supermarket, complete with a butcher, cheesemonger and coffee bar.

Chief Executive Officer Jeff Bezos toured a prototype store in late 2015 and said it could confuse customers. Instead, he asked the team to focus on refining the people-tracking technology and checkout experience. Go opened to the public three years later as a convenience store in Amazon's headquarters, and the original space sat empty - until now.

The store's opening won't be Amazon's last new take on grocery shopping this year. In Los Angeles, the company is preparing the first in a new line of grocery stores, with traditional checkout counters but distinct from the Whole Foods chain.

Amazon is also weighing other Go formats and potentially licensing the technology to other companies, Bloomberg reported last year. Blueprints filed in Washington, D.C., suggest a Go Grocery is coming to the nation's capital, too.

Janes didn't comment on plans for future stores but said the new Go Grocery will target apartment dwellers rather than the office workers the existing Go stores mostly serve.

"This is our first one," Janes said. "I think we're going to learn and see where they're going to work … high-density residential areas is where we're starting."