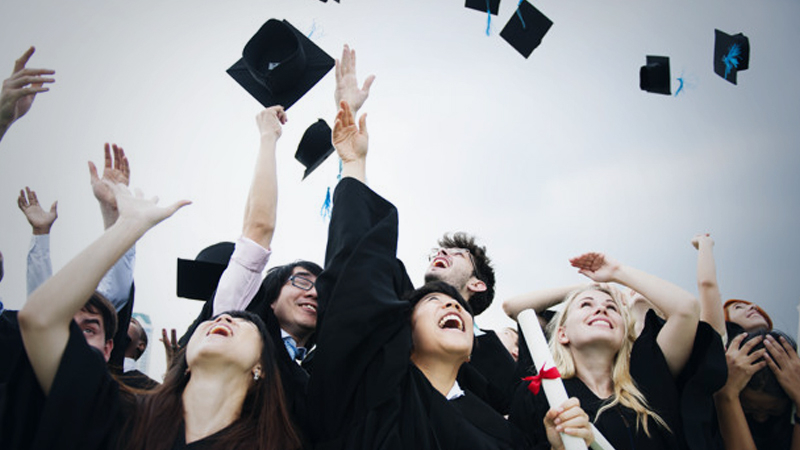 WELLESLEY, Mass. - Hundreds of college seniors wearing graduation gowns stood in a line Saturday morning, then bent over and stuck one arm inside a large hoop - some wooden hoops, some plastic hoops conscripted for the purpose. "Ready. Set. Go!" a junior shouted, and each senior began twirling an arm to set their hoop rolling.

Graduating seniors at Wellesley College have performed this hoop-rolling ritual for most of the school's 145 years - but not on chilly March mornings at the end of midterms.

Like so many other colleges throughout the country, Wellesley is making drastic changes to protect students and their communities from the covid-19 pandemic. Instead of months to wind down their college years and say goodbye to friends, students have just days to finish, pack up their dorm rooms and move out to finish the semester online.

Rather than going quietly - and following officials' directives to practice social distancing - many are trying to cram two months of partying, beloved school traditions, bad decisions and bittersweet farewells into their last few days together.

Remain six feet away from others? Avoid large gatherings?

Many students, of course, are concerned about the pandemic and are taking precautions. But the reaction of others illustrates how difficult it can be to wrench apart close communities and how rituals of campus life often conflict with public health practices.

At the Massachusetts Institute of Technology, as word leaked out Tuesday that the school's president would soon urge undergraduates to move out, hundreds of students poured into a courtyard in the shadow of the school's distinctive dome.

Some brought folding tables for pong and other drinking games, some brought champagne, some brought speakers and formed a dance circle. At one point, students "acquired" a hand-sanitizing station from a hallway and proceeded to dance around it, posing for photos, according to Connor Sweeney, a junior from Delaware.

At Johns Hopkins University, when students in the Peabody Symphony Orchestra learned that a long-planned concert was being canceled along with other large gatherings, they decided to perform one last time - at the cafeteria that night, surprising students and others with some late-night Tchaikovsky.

At Smith College in Northampton, Massachusetts, a social media invitation encouraged people to turn up, share their angst about world events, drink heavily and "kiss your crush." It was later amended: "Maybe encouraging people to kiss their crush isn't the best idea under these circumstances."

And Smith senior Rebecca Grossman noted: "There was someone walking around and dispensing hand sanitizer during this rave-like event."

With some schools canceling commencement - including the University of Michigan - many seniors created their own impromptu ceremonies, just in case.

At Smith, a group of seniors started planning a small graduation ceremony for their friends. In the end, nearly the entire senior class turned up, Grossman said.

They paraded in wearing caps and gowns and listened as students who had been chosen to speak at the formal graduation delivered shortened versions of their talks.

One student pretended to be House Speaker Nancy Pelosi, D-Calif., who was scheduled to give their graduation speech May 17.

In a nod to Pelosi's actions after listening to President Donald Trump's State of the Union address, the student ended her speech by saying, "I hear you all just got an email that you have to leave." Then, the student ripped up the paper, Grossman said. "It was all very silly," she said.

At Wellesley, the mood, while exuberant, was tinged with sorrow. "This is great. It's awesome," senior Phoebe Amory said after the hoop-rolling. "It was so lovely to see everyone come together."

Was it enough to compensate for missing the final two months of her college career, which she will complete online from her home in Albany, New York? "Not even close," Amory said.

At the University of Dayton, a rowdy crowd gathered on a street near student housing one night last week to celebrate the unexpected last day of classes. Within minutes of the official email, the campus newspaper the Flyer News reported, "Coronafest" was being organized online.

Police used pepper balls to try to disperse the crowd of more than 1,000 people, some of whom were jumping on cars and hurling objects, school officials said.

Students at Harvard's Lowell House, one of the school's 12 residential communities, orchestrated a party Thursday evening that wrapped all their spring traditions into one crazy event.

In a nod to the annual Bacchanalia party, a faculty member dressed in a toga and greeted a similarly clad senior who launched the revelry. Others wore tuxedos or gowns to pay homage to the annual Housing Day, when sophomores, juniors and seniors storm the freshman dorms to notify the freshmen which house they'll be living in for the rest of their college career.

Then, the piñatas came out.

"It was a beautiful mixture of chaotic energy," said junior Andrew Castillo, 20, of Los Angeles, who planned the last-minute event with junior Ross Simmons, 20, of Higginsville, Missouri, a distant suburb of Kansas City, that he said largely lacks the high-speed internet the math major will need to continue his classes.

The two were concerned that they weren't able to squeeze in trivia night or poker night - two more springtime traditions - but the Lowell House Opera did get to perform selections from what would have been its upcoming performance.

Some of the pastries prepared for the weekly tea - another house tradition that had to be canceled because of fears of passing on the virus - were individually wrapped and offered on a table. And the entire stockpile of liquor, in reserve for the next two months of events, was offered up, including champagne, pumpkin beer and ale.

"It was a very weird atmosphere. A lot of joy. A lot of sadness. ... A lot all at once," said Castillo, a regenerative biology major who literally had to put his senior research project on ice until at least the summer, before flying home Friday.

"It felt," Simmons said, "like the party at the end of the world."