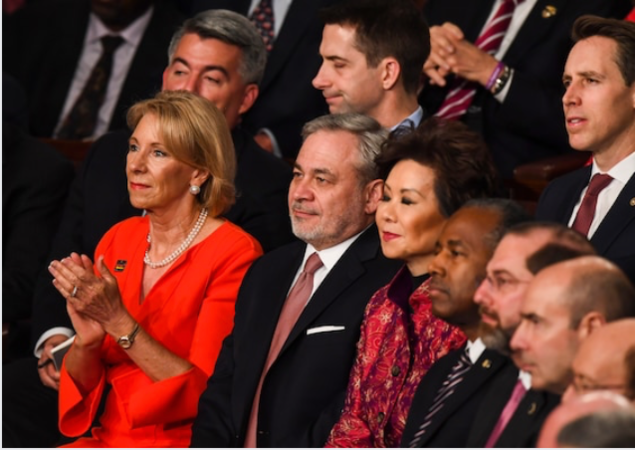 Education Secretary Betsy DeVos, left, and other Cabinet members attend the State of the Union in February 2020. MUST CREDIT: Washington Post photo by Toni L. Sandys

The new rule bars universities from using a single official to investigate and judge complaints, a popular model, and instead creates a judicial-like process in which the accused has the right to a live hearing and to cross-examine accusers.

The rule also adds dating violence and stalking to the definition of sexual harassment. But it otherwise offers a narrow definition of harassment, requiring that it be severe and pervasive, as well as objectively offensive.

"Today we release a final rule that recognizes we can continue to combat sexual misconduct without abandoning our core values of fairness, presumption of innocence and due process," DeVos told reporters. The new regulation, scheduled to take effect on Aug. 14, falls under the federal civil rights law known as Title IX, which bars discrimination on the basis of sex in federally funded schools.

The rule, first proposed in 2018, has come under fire from women's rights groups and Democrats, who said it would allow assailants and schools to escape responsibility, discourage victims from coming forward, subject survivors to additional trauma and make college campuses less safe for women.

"The Title IX rule is a devastating blow," Sen. Patty Murray, D-Wash., said on Twitter, adding that "it's about silencing survivors."

The move was also opposed by university officials, who argue the new rules will turn their campuses into courtrooms incompatible with an academic atmosphere. On Wednesday, a leading advocacy group for colleges said the decision to implement the rules in the midst of the coronavirus pandemic reflected "appallingly poor judgment."

Even before the 2,033-page regulation was released, opponents were vowing a legal challenge, hoping to halt or at least stall the new rules.

"We will fight this rule in court, and we intend to win," Emily Martin, a vice president at the National Women's Law Center, an advocacy group, said Wednesday. She said the core of the challenge would be that the Education Department was "arbitrary and capricious" and in violation of the Administrative Procedure Act, which governs how agencies write regulations. She said the agency ignored evidence showing that the rules would harm survivors of sexual violence.

The rules follow years of pressure on universities to better respond to allegations of sexual assault. That pressure has increased amid a #MeToo movement that has empowered women to tell their stories of harassment and abuse, and amid a broad cultural debate over how to balance those stories against the rights of the accused.

Most recently, the debate has hit former Vice President Joe Biden, who has denied an allegation of sexual assault. Biden, the presumptive Democratic nominee for president, has promised to restore Obama-era rules for universities dealing with allegations, measures that are friendlier to alleged victims. His campaign did not reply to a request for comment on the DeVos regulation.

Supporters of the DeVos rule said it would restore balance and fairness to proceedings that too often tilt in favor of accusers. They were particularly buoyed by the requirement for cross-examination, saying it is the most effective way of ferreting out the truth of what happened in a situation when students offer different recollections of the same event.

"The cross-examination requirement means that if you're going to accuse someone of a terrible crime, you're finally going to be asked hard questions about that," said Justin Dillon, a lawyer with the D.C. firm KaiserDillon who has represented scores of students accused of sexual misconduct. "That's how it should be, given the stakes."

There are limits. Accusers are not required to be face-to-face or answer questions directly from the accused. The regulation also provides "rape shield protections," such as a bar on questions about an accuser's sexual history.

The new rules also allow schools to offer survivors supportive measures, such as dorm reassignments, in lieu of a disciplinary proceeding.

DeVos hoped to publish the rule late last year, but she was delayed in part by the need to respond to a crush of public comments - 124,196 in all, including a torrent of criticism from universities, advocacy groups, survivors of sexual assault and campus leaders.

This spring's coronavirus pandemic also contributed to delaying the announcement, but critics said the agency should have waited longer or given universities more time before the rules take effect, given the crisis.

Ted Mitchell, president of the American Council on Education, which represents university presidents, said his group pleaded with the agency to hold off issuing the rules during the pandemic. He said that implementing something this complex would be challenging under normal conditions but will be extremely difficult with campuses closed.

"This is irrational, unrealistic and completely at odds with the Trump administration's oft-repeated statement to tread lightly when imposing complex new regulations," he said.

DeVos responded that universities knew what was coming and should be prepared to implement it. "The reality is that civil rights really can't wait and students' cases continue to be decided now," she said. A department attorney added that the rule gives schools flexibility to conduct investigations and hearings remotely and that it covers online harassment.

The Education Department also wanted to finalize the rule in time to avoid having it rolled back by the Congressional Review Act, which allows Congress to overturn regulations passed in the previous months, GOP officials said. The administration feared that passing it too late might allow Democrats to attempt to undo it if they win control of Congress next year.

The rewrite of Title IX regulations will probably be recorded as the most significant and lasting legacy of DeVos's tenure as education secretary.

Her views promoting school choice for elementary and secondary students have stirred controversy, but she has made little headway in translating them into federal policy. She has worked to bolster for-profit colleges, but those moves affect just a slice of higher education.

These regulations, by contrast, affect every school that accepts federal money, which is virtually all of them.

In its broad outlines, the rules are unchanged from the proposed version released in 2018, though there were some alterations. In one change, the regulation explicitly adds dating violence, domestic violence and stalking as allegations that must be investigated.

The rules give universities a choice about what standard of proof they use in judging complaints. Schools may choose between "preponderance of the evidence" or the higher bar of "clear and convincing evidence." But a school may not use the lower standard if it relies on the higher one for allegations against employees, including faculty members.

Overall, the rules narrow the types of complaints that institutions are obligated to investigate. For instance, universities will be required to investigate complaints only if they are made to proper authorities. In a change from the proposed rule, though, any report to an employee of a K-12 school would put the school on notice and require a probe. (K-12 schools are also not required to hold live hearings.)

The final rule also clarifies that universities are responsible for investigating incidents that take place in university-recognized fraternity or sorority houses located off campus, or in other locations, such as at an academic conference that relates to a university program.

But incidents that occur off campus between two students on their own would not be subject to Title IX procedures.

The rule replaces less formal guidance issued by the administration of President Barack Obama and revoked by DeVos in 2017.

The new regulation could be undone or modified through legislation should Democrats gain control of Congress and the White House next year. But because it is a formal regulation, a new administration could not simply reverse it the way DeVos did with the informal guidance issued under Obama.