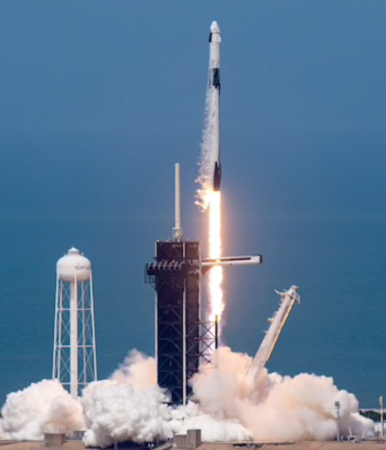 The NASA commercial crew with astronauts Doug Hurley and Bob Behnken blast off from Launch Complex 39A aboard the SpaceX Falcon 9 rocket in the Crew Dragon capsule bound for the International Space Station on Saturday. MUST CREDIT: Washington Post photo by Jonathan Newton

With the country wracked by the coronavirus and racial strife, the United States opened a new chapter in space exploration Saturday when a SpaceX rocket blasted off from the Kennedy Space Center in Florida, carrying two astronauts to orbit from American soil for the first time in nearly a decade.

It was a historic moment for SpaceX, which became the first private corporation to launch people into orbit, and for NASA, which has struggled to regain its footing after retiring the space shuttle in 2011, leaving the U.S. no option but to rely on Russia to ferry its astronauts to space for as much as $90 million a seat. 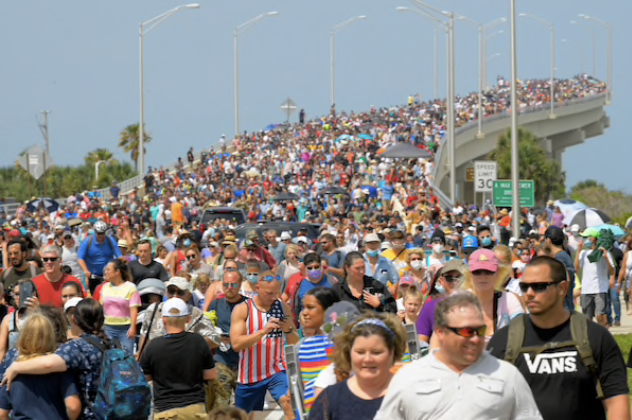 But it also comes at the end of a historic and tragic week in America. Fatalities from the coronavirus pandemic passed 100,000 in the recent days and sometimes-violent protests and looting erupted overnight in major cities, including New York, Los Angeles and Washington, D.C., over the Minneapolis police slaying of George Floyd, another unarmed black man killed by law enforcement.

Both President Donald Trump and Vice President Mike Pence made mention of those demonstrations in speeches to mark the new era of space travel. Trump called the launch a unifying moment for the country, even as he called protesters "criminals" and "thugs."

"Moments ago as we witnessed the launch of two great American astronauts into space, we were filled with the sense of pride and unity that brings us together as Americans," Trump said, reading from a teleprompter. "That same spirit which powered our astronauts to the moon has also helped lift our country to ever-greater heights of justice and opportunity throughout our history.

"So today as we mark a renewed commitment to America's leadership in space - a tremendous commitment it is - let us also commit to a brighter future for all of our citizens right here on Earth."

Both Trump and Pence praised Elon Musk, the controversial entrepreneur whose vision of flying to Mars led him to found SpaceX nearly two decades ago. Musk himself was ecstatic with the flight's success. "I'm really overcome with emotion and it's really hard to talk frankly," he said. "We haven't quite yet docked and of course we need to bring them back safely, so it's a lot of work to do. But it's just incredible."

Saturday's launch was the second attempt to begin the mission. It was originally scheduled for Wednesday, but that was scrapped because of bad weather in the area. 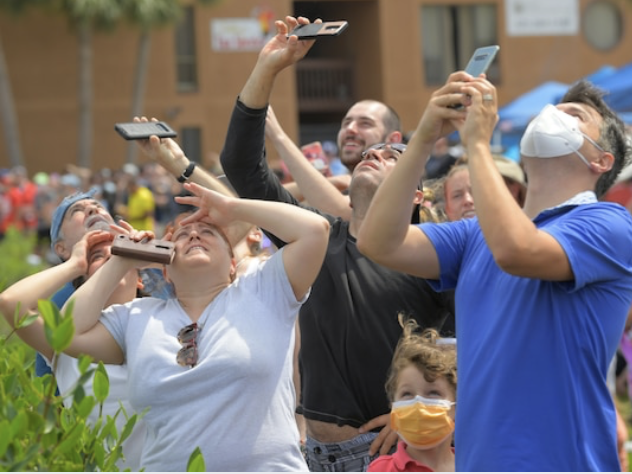 For much of the morning and early afternoon, those conditions persisted. Showers rolled over Kennedy Space Center just after astronauts Doug Hurley and Bob Behnken walked out of the Neil Armstrong Operations and Checkout Building in their custom-fitted spacesuits. Standing beside two Tesla Model X SUVs, the astronauts exchanged final goodbyes - "virtual hugs," air-kisses and thumbs up - with their families. 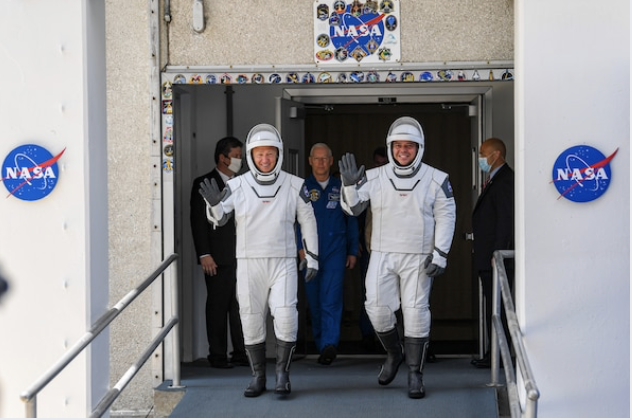 Flight technicians drove Behnken and Hurley nine miles to launchpad 39A, the historic site from which the crew of Apollo 11 left for the moon, listening to a playlist that included AC/DC's "Back in Black," bossa nova standard "The Girl from Ipanema" and, finally, "The Star-Spangled Banner."

They boarded the Dragon capsule at 12:35 p.m., as it began raining at the launch site. Those conditions passed, though, at around 2:35 p.m., and flight engineers signaled a go for launch.

As the flight countdown clock continued to tick, technicians fueled the two boosters of the Falcon 9 rocket and armed Dragon's emergency abort system. Less than an hour later, SpaceX Flight Director Mike Taylor declared the mission go for launch, and at 3:22 p.m. - precisely on time - the Falcon 9′s first-stage engines ignited, shoving the spacecraft away from its support beams and into the air.

Accelerating rapidly at more than twice the speed of a gunshot, Falcon 9 tore through the humid Space Coast sky, leaving a blazing fireball and smoky trail in its wake, shaking the Earth and unleashing a deafening roar audible for dozens of miles.

Two and a half minutes after liftoff, Falcon 9's first booster stopped firing and separated from the second stage, landing seven minutes later on a barge floating in the Atlantic Ocean named "Of Course I Still Love You."

The second stage ignited and shot the Dragon capsule toward orbit. Twelve minutes after launch, it two dropped away - the signal that the Dragon capsule was on its way to orbit. Raucous applause erupted from space officials at NASA facilities in Florida and Texas, and at SpaceX's mission control offices in Hawthorne, Calif.

"We have done it," NASA Administrator Jim Bridenstein declared on NASA's live-stream broadcast.

Despite repeated warnings by NASA to stay home because of the coronavirus, fans lined the beaches to watch a historic moment, but the space agency drastically limited attendance at the Kennedy Space Center.

The flight was the fulfillment of a risky bet by NASA under the Obama administration to entrust the private sector to fly astronauts, and Trump's administration has made human space exploration a priority.

Trump turned Air Force's Space Command into the Space Force, its own branch of the military, and named Pence the chairman of the National Space Council. He has pushed NASA to conduct a lunar landing mission by 2024 as a steppingstone for a mission to Mars.

Pence has said the U.S. will return to the moon "by any means necessary."

For SpaceX, it was the climax of an improbable odyssey that began in 2002. Musk continues to speak frequently of his goal to establish a colony on Mars and humanity's need to be a "multi-planetary species."

"We cannot be complacent about technology development," he told The Washington Post in a preflight interview. "We have to really drive innovation hard and say, 'Okay, let us go as fast and as hard as possible to get humanity back to the moon and there to stay and have a base on the moon, maybe [a] city on the moon, to have a base on Mars, a city on Mars to . . . make life multi-planetary.'"

"I think this is very important to secure the future of life as we know it to ensure that the light of consciousness does not go out."

Trump called Musk "one of our great brains," and "a friend of mine for a very long time."

"Congratulations, Elon," Trump said, stepping away from the lectern to offer his own applause while the crowd at Kennedy Space Center whooped and hollered.

The Crew Dragon capsule is expected to dock with the International Space Station at approximately 10:30 a.m. Sunday.

Sunday's docking will be handled autonomously by the spacecraft, though Hurley and Behnken have the ability to take over the controls manually if needed.

In 2014, NASA awarded contracts to Boeing and SpaceX, with $6.8 billion combined, to design and build spacecraft capable of flying astronauts to the station. Previously, it had hired the private sector to fly cargo and supplies there. But outsourcing human space flight to companies was considered a risky and even reckless move in some quarters, even among NASA's leadership. Along the way there had been a number of stumbles that delayed the first flights from 2017.

Boeing, the aerospace behemoth that had been by NASA's side since the dawn of the Space Age, was considered the favorite to fly first. But it stumbled when the test flight of its Starliner spacecraft encountered software problems almost immediately upon reaching orbit. Boeing has pledged to redo the test sometime later this year.