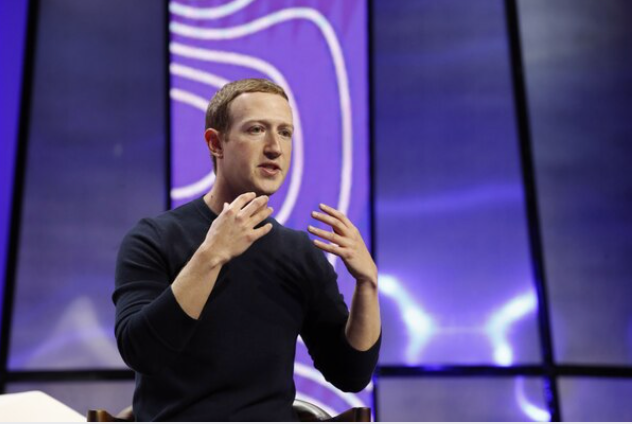 Trump last week tweeted that "when the looting begins, the shooting begins," which many people interpreted as a call for violence in nationwide protests over the death of George Floyd. Twitter put a warning label over the tweet, flagging it as violent content that broke the company's policies but was being left up because it was newsworthy. Facebook declined to take any action on a similar post on its site.

In response, dozens of Facebook employees participated in a virtual walkout on Monday, and many more expressed outrage in internal forums and on Twitter. At least two employees have resigned, according to public posts and tweets and conversations with workers.

"Open and honest discussion has always been a part of Facebook's culture," spokesperson Liz Bourgeois said in a statement. "Mark had an open discussion with employees today, as he has regularly over the years. He's grateful for their feedback."

During the town hall, Zuckerberg did not back down from his decision to keep up the post, as many employees had hoped, according to several workers who were listening but declined to provide their names for fear of retribution.

At least five people have died in nationwide protests that began this weekend. Thousands more have been tear-gassed and injured.

At the town hall, Zuckerberg defended his decision that the post did not constitute a policy violation, as he personally walked employees through different interpretations of Trump's language.

But the CEO said he would begin to review the transparency of the processes around how pieces of content get escalated to senior managers. He also said that he would be open to reviewing how the company handles content around state violence, a nod to the growing use of force at the protests.

Zuckerberg's personal involvement in the decision is characteristic of the way he has handled controversial policy choices over the last several years, since the social network has been in a state of crisis over accusations of Russian meddling and the Cambridge Analytica privacy scandal. His leadership style contrasts with Twitter CEO Jack Dorsey, who tends to delegate policy decisions to his deputies.

Zuckerberg also made the decision not to take down a video of House Speaker Nancy Pelosi that was manipulated to make her appear drunk. He made a personal call not to fact check political advertising, despite frustration from the public and from employees, according to a person familiar with the decision-making.

Historically, both Facebook and Twitter have been hands off when it came to political speech, exempting it from policy violations because it is newsworthy. But Twitter has recently pivoted from its long-held stance. The company has decided to fact check politicians and to label their commentary with a warning when it breaks the service's policies, as it did for the first time with Trump last week. Twitter first fact-checked a Trump tweet with misleading information about mail-in ballots.

Facebook, on the other hand, has doubled down in the direction of free speech, with Zuckerberg reiterating the point in speeches and public statements last year.

Two of the people who attended the town hall said Zuckerberg's suggestions seemed like minor concessions that did not appear to appease the many angry employees, some of whom repeatedly pointed out in questions that very few black people were attending the town hall.

The decisions at Facebook have prompted at least two employees to publicly resign.

Timothy Aveni, a software engineer according to his Facebook page, said in a public resignation letter that he was disappointed in Zuckerberg's leadership.

"Mark always told us that he would draw the line at speech that calls for violence," Aveni wrote. "He showed us on Friday that this was a lie. Facebook will keep moving the goalposts every time Trump escalates, finding excuse after excuse not to act on increasingly dangerous rhetoric."

Twitter's decision to flag two of Trump's erroneous tweets last week for the first time prompted the president to lash back, signing an executive order that called for reexamining a law that has helped shield tech giants from liability for content posted on their sites.

On Tuesday, Washington-based advocacy group Center for Democracy and Technology, which is supported by Facebook, Google and Twitter, filed a lawsuit alleging the executive order threatens to "curtail and chill constitutionally protected speech" across the web.

Throughout the weekend, Facebook employees used the company's internal chat system to question not only Trump's tweets but a handful of others tweets by politicians that appeared to encourage violence, including by Florida GOP Congressman Matt Gaetz, which Twitter also labeled.