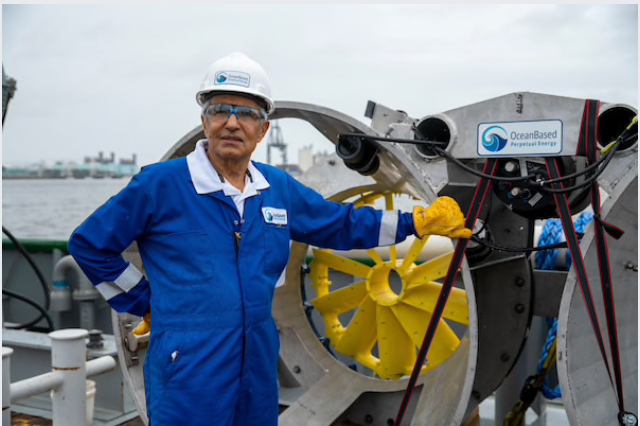 Nasser Alshemaimry was on a boat last month, heading for a spot in the Atlantic Ocean to test out his turbines. He was also, he said, heading for completion of his final life goal.

"This is my last hurrah," said Alshemaimry, 70. "I'm going to do this and then retire."

A year ago his company, OceanBased Perpetual Energy, agreed to work with Florida Atlantic University to develop a way to generate electricity by harnessing the steady-flowing Gulf Stream, the powerful ocean current that brings warm water from the Gulf of Mexico into the Atlantic and up the East Coast to Canada. Now his company was ready for the first test of five types of turbines to see which one would work best while anchored 80 feet below the ocean's surface.

A successful test, Alshemaimry said, would lead to a project that would cost an estimated $16 billion. The goal: in five years, producing 5 gigawatts of electricity from turbines spun by the Gulf Stream, which would be sent through underwater cables to a power distribution station built in the West Palm Beach area.

The 12- person team submerged the turbines in the Gulf Stream current approximately 20 miles offshore between Broward and Palm Beach counties, where the current's velocity typically ranges from 3.5 to 5.5 miles per hour. They left them there for 24 hours to see which ones would spin the best in the Gulf Stream's flow, producing power with the fewest problems.

On June 1, the company declared the test to be a big success, with "game-changing implications for the future of perpetual clean energy." All of the turbines worked well, but the team selected a design that looks like a pair of airplane engines mounted on a single wing to eliminate the torque caused by the rotating propellers.

Ocean energy works very much like wind power - the force of the sea turns the propellers of a turbine, activating a generator to produce electricity. But submerged turbines come with unique challenges - electrical parts have to be sealed and must resist corrosion, while underwater repairs are disruptive and difficult.

Producing energy from the ocean is not a new idea. The La Rance tidal power station in Brittany, France, has been using 24 turbines to convert ocean tides into electrical power since 1966. Ocean power produces none of the carbon emissions linked to climate change, and it appeals to some energy executives because tides and currents are predictable, unlike solar and wind. But the cost of building the complex infrastructure required is so great that, so far, solar and wind have outpaced it. For instance, the world's biggest tidal power station, located at Sihwa Lake in South Korea, cost about $300 million to build in 2011.

"It's safe to say that ocean energy is not a sizable focus in the U.S. currently," said Fred Mayes, senior energy analyst with the U.S. Energy Information Administration.

A tidal energy project off the Oregon coast, Ocean Power Technologies' Reedsport Wave Park, fell apart in 2014 when the company was unable to line up financing. The company had obtained a Federal Energy Regulatory Commission permit - the only one ever issued in the U.S. for a wave energy project - to install 10 buoys, each the size of a bus, that would generate enough power for 1,000 homes. The company never deployed any buoys and abandoned the permit when it could not raise the $50 million in estimated construction costs.

"This is a disappointment on many fronts," Jason Busch, executive director of the nonprofit Oregon Wave Energy Trust, told The Columbian in Vancouver, Wash., at the time. "It has become, rightly or wrongly, sort of a proxy for the industry."

There is one other American project underway. With state and federal grants, Verdant Power has installed turbines underwater in the east channel of the East River in New York as part of a demonstration. However, the power being generated is below the 1 megawatt threshold required for reporting outputs to the Energy Information Administration.

"In general, we have found that many of these niche applications, while interesting and helpful for research purposes, can't compete in the wholesale power market," said the agency's Glenn McGrath. "However, we continue to monitor developments in this area."

Gabriel Alsenas, director of the Southeast National Marine Renewable Energy Center at Florida Atlantic, said that's in part because ocean energy hasn't been given the same government subsidies that solar and wind industries have enjoyed. As a result, he said, the technology is "immature."

At least one study says it shows promise, however, A 2013 study of ocean current energy resources by the Georgia Institute of Technology found that the Florida Current portion of the Gulf Stream, which runs like an underwater river along the entire Eastern Seaboard, could generate between 4 and 6 gigawatts. One gigawatt, which equals a billion watts, would be enough to power about 725,000 homes.

Alshemaimry, a Saudi entrepreneur with prior experience building solar-powered homes, spent several years working on a never-completed tidal energy project in Sweden. Then, at a conference in Scotland, he met a U.S. Department of Energy official who suggested he contact Alsenas at Florida Atlantic University about the use of ocean currents.

FAU's Southeast National Marine Renewable Energy Center has spent more than a decade researching issues related to ocean energy, such as how fish and other marine creatures avoid underwater turbines, and which types of turbines work best in different conditions.

After one phone conversation three years ago, Alenas said, Alshemaimry dropped his Swedish project, switched from waves to currents and moved his entire operation to Florida. Alshemaimry, now contends what he has planned will be far superior to all tidal energy plants.

While it's true the Gulf Stream flows all day and night, it's not perfectly constant: The 2013 study found that its flow varies, growing stronger in the fall and weaker in the spring. Climate change projections say its flow is likely to weaken further and to switch its path someday.

But Alshemaimry said it would continue flowing sufficiently to keep on driving a powertrain, generating as much electricity as Florida could need. That's a tall order: Florida currently consumes 220.7 terawatt hours of power, most of it provided by plants burning coal or natural gas.

Asked why, if the Gulf Stream is such a perfect resource for power, no one else has tried it before, he said, "No one else is crazy like me."