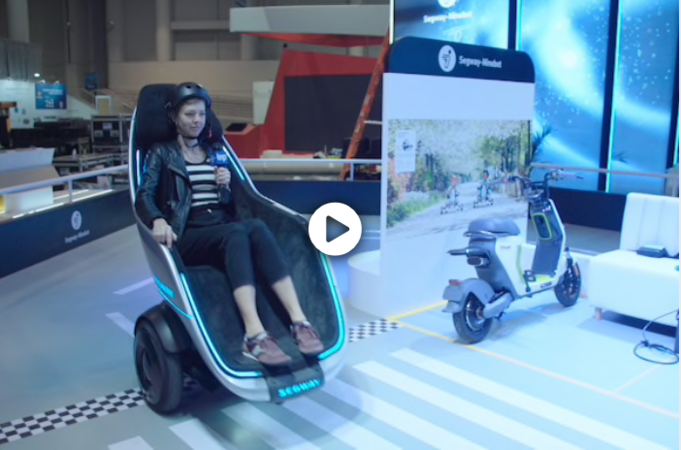 SAN FRANCISCO - The Segway PT, that two-wheeled vehicle that makes riders lean forward, will soon be no more.

Segway-Ninebot said this week that manufacturing for its most recognizable product will halt July 15. The company said it was a decision based on economics. The PT, or personal transporter, only made up 1.5 percent of the company's revenue last year, Segway President Judy Cai said in a statement.

Retiring what most simply know as the Segway will free up room for the company to focus on its newer products, she said, which include a self-balancing "WALL-E" podlike vehicle called the S-Pod, a more traditional looking electric kick scooter and a smaller self-balancing vehicle controlled by the user's knees.

"Given our decades-long history, we recognize that this decision may come as a disappointment to our strong and loyal following among private owners, who view the Segway as one of the more innovative creations of the early 21st century," Cai said.

Indeed, the Segway has developed a fervent but niche following in a few markets, notably for city tours, mall and airport security and some law enforcement departments. But even as companies and consumers have shifted to a new era of micro mobility with shared rides, bikes and scooters, the device failed to keep up.

The Segway may have been introduced too early for its time, in a world where scooters were still thought of as kids' toys. It was introduced in 2001 on "Good Morning America" and went on sale the next year on Amazon.

The scooter, a version of which is still for sale for more than $6,000 on Segway's website, failed to go mainstream. As early as 2015, Wired declared the device dead, writing that the scooter never took off in part because it was clumsy to use inside buildings and there was no real way to use it on city streets. Plus, the publication added, it made people feel lazy.

That stereotype - that Segway riders were lazy, that they should just walk - was a big drawback for the Segway, which had been introduced with such an enduring "wow" factor, said Loup Ventures partner Gene Munster.

Popular portrayals in the media, while cementing the scooter's place as a cultural icon, also didn't help its cool factor. The Segway is probably best known in movies and TV for being the preferred mode of transportation for goofy mall cop Paul Blart and for underachieving brother Gob in "Arrested Development."

Segway's debut came years before docked bike-sharing options popped up in a widespread way, and even longer before Lime, Spin and Uber scooters populated city streets.

"I think that Segway didn't get to a cheap enough product fast enough to really win the micromobility race," Munster said. Still, he pointed out, the Segway lasted for nearly 20 years - much longer than many flashy tech products.

The Segway was also been marred by controversy, including safety concerns when Segway owner Jimi Heselden died after driving off a cliff while riding one of the devices.

In the meantime, there's been a e-scooter explosion of the more traditional version, with companies like Lime and Bird flooding the streets with motorized shared scooters that provide a more practical, cost-effective method of getting around.

Now people can buy their own electric scooter for less than $1,000, said David Zipper, a visiting fellow at the Harvard University's Taubman Center for State and Local Government. And while scooters got a pretty controversial start in some cities as they ran up against local regulations, the tides are starting to turn as some people start to rely on them and bike shares rather than cars.

"I think some people may not like dockless scooters, but you're not laughing at them," he said.

Once scooters and electric bikes and the sharing economy took off, it was a matter of time before the big, once-innovative Segway vehicles took a backseat.

"Once we had solved the micromobility problem, it kind of wrote the last chapter for Segway," Munster said.

Chinese company Ninebot bought Segway in 2015. Segway said 21 people will be laid off next month because of the discontinuation of the Segway and of two other products.

Still, some businesses rely on the Segway devices. Many of those offer city tours to tourists who are looking for a novel way to get around, without walking or driving.

Kenneth Lippman's tour company, Another Side Tours, was founded in 2007 in the back of his friend's Mexican restaurant "with four Segways and a dream," he said. It now offers a wide variety of walking, driving and Segway tours in Los Angeles and San Diego, so he has other offerings to lean on as Segways phase out. But even that will take quite some time, he said.

Lippman still has a few of the Segways from his first tour in his fleet today, and he expects his newer models will last several more years.

In Colorado, Rocky Mountain Segway owner Diana Greenberg and her husband, Sanford - affectionately known in the industry as "Segway Sandy" - own both a touring company and a sales and service center for Segway vehicles.

Greenberg figures people will still need to get their Segways fixed, and she's already been selling other Segway-Ninebot products so she's not too worried. But she is concerned for other businesses that are built around solely giving tours.