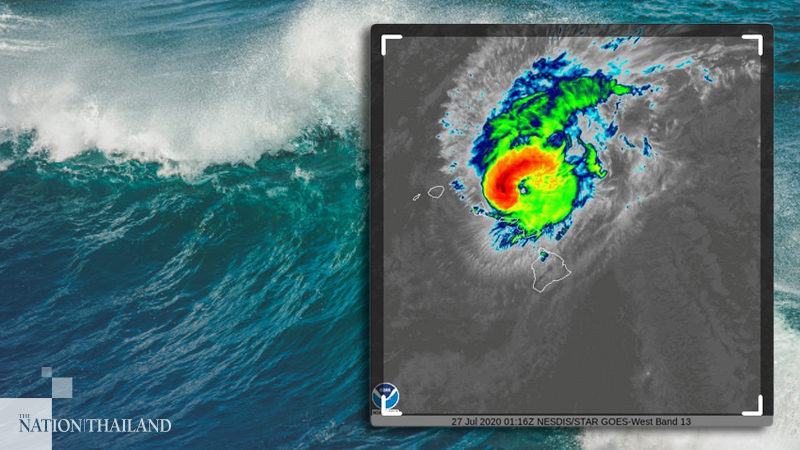 Hurricane Douglas was moving perilously close to the shores of Hawaii on Sunday and may make landfall in one or more of the islands by Monday morning. Damaging winds, flooding from heavy rains, as well as pounding surf and a coastal storm surge are likely across the entire island chain.

The worst effects are expected to be across Kauai, Maui and Oahu as the storm's center moves west-northwest on a possible collision course with the state. The National Weather Service warned Sunday morning that the wind threat to Maui and Kauai, in particular, have increased from previous forecasts.

By Sunday night Eastern time, Douglas was forecast to be sitting just north of Oahu as a hurricane with sustained winds of 80 to 85 mph. If it makes landfall there or on another Hawaii island as a hurricane, it would become the third storm to do so in the modern history of the state.

"Douglas will pass dangerously close to, or over, the islands today and tonight, bringing a triple threat of hazards, including but not limited to damaging winds, flooding rainfall, and dangerously high surf, especially along east facing shores." wrote the Central Pacific Hurricane Center (CPHC) in an advisory late-morning Hawaii time.

As of 8 p.m. Eastern time, Douglas was about 100 miles due east from Honolulu and 50 miles north of Maui.

Hurricane warnings were up for Kauai, Maui and Oahu.

The storm had weakened slightly Sunday morning, with peak winds down to 85 mph, but remained a Category 1 hurricane. Some additional slow weakening is predicted as the storm passes near or over the Hawaiian Islands, the Hurricane Center said.

No hurricane on record has passed along Douglas' current course. If Douglas makes landfall on Oahu, it will be the first hurricane recorded to have done so.

Even if the storm weakens more, Douglas could inflict "quite a lot of damage," Chris Brenchley, director of the CPHC, said.

As is the case with Tropical Storm Hanna in Texas, Hurricane Douglas is striking a state that has been seeing a growing number of coronavirus cases. Saturday was the third day in a row with record-high covid-19 cases, according to the Honolulu-Star Advertiser. State labs have suspended testing during the storm, with services expected to return early week.

Honolulu, located on Oahu, is opening 13 evacuation centers, the paper reported. City officials have taken covid-19 precautions, such as providing for social distancing. The Hawaii Convention Center is among locations being used. It can hold up to 1,600 people with covid-19 precautions in place.

Large waves have been crashing into the northern shores of the island chain in recent days. Waves will build Sunday, along with deadly rip currents. As the center passes, NWS is warning of a damaging storm surge up to three feet above the normal high-tide level. The greatest storm-surge risk should tend to be focused on the northeast shores of Oahu and the eastern half of Kauai.

Onshore in Oahu, where the storm is forecast to pass just miles away, strong-to-destructive winds are anticipated islandwide. The worst wind impacts probably focus on the northern and leeward parts of the island. Honolulu is expecting sustained winds of 35 to 45 mph, with gusts to around 60 mph. Northern parts of the island could see wind gusts around 80 mph, along with torrential rainfall and dangerous flash flooding.

The Weather Service forecast office in Honolulu warned of "life-threatening" high winds in many areas closest to the predicted position of the storm center.

Widespread wind damage is possible in areas that are closer to the storm center. The mountainous terrain could create localized areas of enhanced winds because of wind-tunnel-like effects of mountain passes.

While the storm will pass relatively quickly, rainfall totals of five to 10 inches are a good bet in the hardest-hit spots, and some locations may reach 15 inches or more. Torrential rain is likely to lead to flash flooding, as well as flooded rivers and tributaries.

Hawaii's location near cooler sea-surface temperatures has historically protected it from anything but the rare hurricane strike. There have been only two hurricane landfalls there in modern times; Category 1 Hurricane Dot in 1959 and Category 4 Iniki, which caused widespread damage on Kauai in 1992.