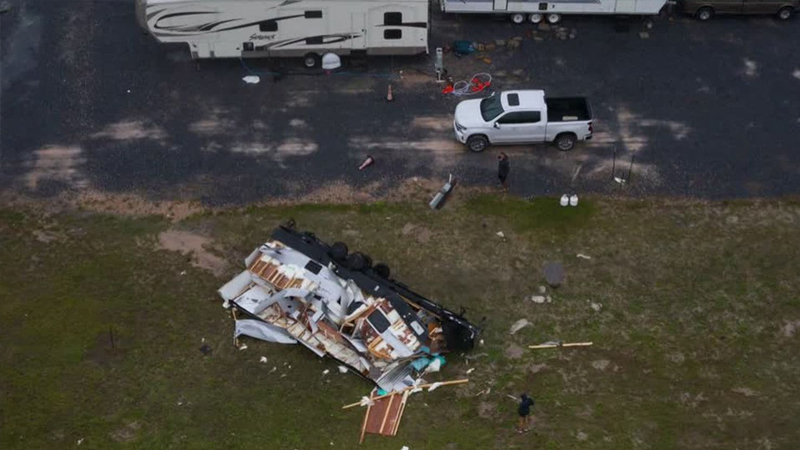 Meanwhile, meteorologists are cautiously watching another brewing system in the Atlantic that could become problematic by late in the week.

Hanna has unloaded more than 15 inches of rain in parts of South Texas, resulting in serious flash flooding, and totals may exceed 18 inches in some areas before rain ends late Sunday or Monday.

The direct strike by Hanna comes at a time when Texas is grappling with a spike in coronavirus cases. Counties in coastal South Texas have seen some of the sharpest increases in coronavirus cases in the state. The overlapping pandemic and hurricane complicated decisions on the implementation and operation of storm shelters and the response of government agencies.

In Cameron County, which includes the city of Brownsville, cumulative coronavirus cases climbed from 3,854 on July 12 to 7,846 on July 25, according to the Texas Department of State Health Services, climbing by about 300 per day during that two-week period. Hidalgo County, which includes McAllen, has the third-highest total of covid-19 fatalities in Texas, with 456 as of Saturday.

Nearly 175,000 customers in the state were without power Sunday evening, mostly in the south, according to PowerOutage.us.

"Hurricane Hanna dealt a heavy blow to our system," tweeted the Magic Valley Electric Cooperative, which serves far South Texas. "We are ready to rebuild but cannot do so until it is safe for many areas in the Valley. Members should be prepared for prolonged outages."

The storm underwent a bout of rapid intensification into Saturday, strengthening into a high-end Category 1 hurricane as it drew near the Texas Coast. Hanna made landfall at 5 p.m. Saturday on South Padre Island with sustained winds of 90 mph near its eye.

On Saturday evening, an offshore weather station at Rincon Del San Jose, Texas, reported a wind gust to 103 mph, while another east of Port Mansfield measured an 87 mph gust. The strong winds helped propel a storm surge toward the coast, with water levels reaching about three feet above normal in Matagorda Bay and 3.8 feet higher than usual in Port Lavaca.

Rainfall amounts have been extreme, with radar estimating in excess of 15 inches in a few areas between Brownsville and Port Mansfield (amounts exceeding 20 inches are not out of the question). Numerous flash flood warnings were in effect through Sunday evening as torrential rain bands pivoted through the region.

The city of Mission, about 60 miles northwest of Brownsville in Hidalgo County, reported "widespread flash flooding" and was under a flash flood emergency early Sunday, the most severe flood alert. Numerous water rescues were reported.

A flash flood emergency was also declared for McAllen, a city of about 145,000, with the NWS in Brownsville instructing residents of these areas to stay home and off roadways.

While the bulk of the rain had fallen as of Sunday evening, Mission warned residents of yet another wave and advised them to stay home.

A local state of disaster was declared in Hidalgo County ahead of the storm, in anticipation of "catastrophic flooding." The National Weather Service placed the region in a "high risk" zone for excessive rainfall.

Conditions will improve gradually over South Texas late Sunday into Monday, but meteorologists will again be busy tracking a new threat gelling over the tropical east Atlantic. That tropical wave, located about 1,000 miles west-southwest of Cabo Verde, will probably become Tropical Storm Isaias as it churns west toward the Lesser Antilles.

At 4 p.m. Central time Sunday, the center of Hanna was 35 miles west-southwest of Monterrey, Mexico, heading west-southwest at 9 mph. It was officially downgraded from a tropical storm to a depression.

Hanna will continue to weaken rapidly as it moves farther away from the lukewarm waters of the gulf, stripped of its life-giving oceanic elixir, disintegrating entirely by Monday or Tuesday.

Until then, gusty winds and heavy rainfall still are anticipated, with 2 to 4 inches of rain per hour possible in some of the heaviest downpours in South Texas.

On Sunday afternoon, the heaviest rain straddled the Texas-Mexico border from McAllen and to the west and northwest where flash flood warnings remained in effect.

Two tornadoes may accompany any heavier elements of rainfall. Radar depicted numerous mesocyclones - or areas of rotation within downpours - that could produce tornadoes. A tornado watch is in effect for South Texas through 10 p.m. Central time.

In Brownsville, winds will slacken during the evening hours Sunday, abating into the overnight and becoming calm with only scattered thunderstorms to start the workweek.

When Hanna formed on Thursday evening, it demolished the record for the Atlantic's earliest "H" storm since bookkeeping began, edging out Tropical Storm Harvey in 2005, which formed Aug. 3. This year's record-busy start to the season has already featured the earliest "C," "E," "F" and "G" storms on record - Cristobal, Edouard, Fay, and Gonzalo.

Hanna formed as a "homegrown" system, taking advantage of anomalously warm water temperatures in the Gulf of Mexico and strengthening speedily between Thursday and its landfall Saturday.

If it had lurked over the gulf's warm waters for another day, the hurricane's intensity would probably have been significantly higher and impacts even more severe.

Hanna's track took it through areas of comparatively low population density, the eye skirting south of Corpus Christi and north of Brownsville.

The hyperactive start to the 2020 Atlantic hurricane season looks to continue, with another tropical system already beginning to come together a thousand miles west of the African coast. The National Hurricane Center has estimated a 90 percent chance that the system will develop into a tropical depression - the precursor to a tropical storm - in the coming five days.

When Gonzalo briefly flared up and drifted west last week, its shower and thunderstorm activity helped impart greater moisture to the upper atmosphere. That will prevent dry air from choking off the upcoming system as it tries to develop, paving the way for it to move west and intensify. Data suggests the system could be one to watch for the Lesser Antilles, Bahamas, and, perhaps, the Southeastern United States - but confidence is extremely low considering no storm has yet formed.