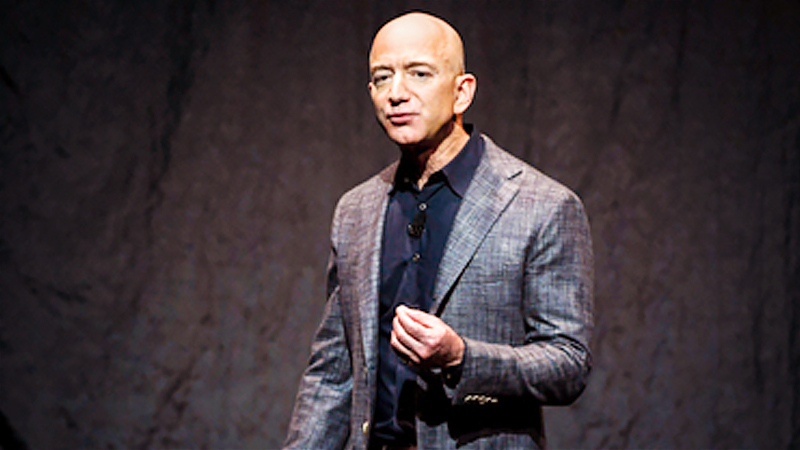 Jeff Bezos gives a presentation to the news media in Washington in 2019. MUST CREDIT: Washington Post photo by Jonathan Newton

SEATTLE - Amazon chief executive Jeff Bezos cited the e-commerce company's "customer obsession" Tuesday for fueling its business success as he attempts to counter congressional antitrust concerns a day ahead of a House hearing probing the power of tech giants.

As dominant as Amazon is - it accounted for 38.5% of U.S. e-commerce in June, according to Rakuten Intelligence - Bezos called the global retail market "strikingly large and extraordinarily competitive," in written testimony submitted Tuesday afternoon to the House subcommittee that called the hearing. To fend off antitrust concerns, which often focus on consumer harm, Bezos noted that 80% of Americans have a favorable impression of Amazon, according to "leading independent polls" that he did not identify.

"At Amazon, customer obsession has made us what we are, and allowed us to do ever greater things," Bezos wrote.

Bezos will swear an oath and appear at the hearing alongside Apple's Tim Cook, Facebook's Mark Zuckerberg and Google's Sundar Pichai. Lawmakers are examining the clout of the tech behemoths that represent a nearly $5 trillion slice of the U.S. economy.

At the hearing, Zuckerberg plans to emphasize Facebook's value in connecting people and supporting businesses during the pandemic, and the fact that the social network competes with the companies at the hearing, according to testimony obtained by The Washington Post. He plans to note that when Facebook moved its headquarters to the campus of a former tech giant, Sun Microsystems, he kept the company's sign up front to remind employees to stay competitive because success can be fleeting.

He is expected to emphasize that Facebook's success has been grounded in American values of democratic expression and competition, and to contrast that with the approach taken by China as a rising tech power.

Pichai emphasized Google's popular Internet services as major benefits for consumers and small businesses in his testimony. The company's products such as search and maps are free for everyone, he noted, and the company invests billions of dollars in research and development every year. He pointed toward Amazon's Alexa and Twitter's newsfeed as competitors to search, one of the areas the committee is investigating.

Pichai repeated a familiar claim that Google and its competitors in online advertising help bring down costs for advertisers. Google is the dominant player in digital advertising, and critics have questioned the company's power because it controls both the advertising framework and many websites where ads appear.

"We also deliberately build platforms that support the innovation of others," he said, mentioning Google's Android operating system.

Bezos's written testimony anticipates that several of the topics lawmakers will probably grill him on during Wednesday's hearing. Rather than focus on online commerce, Bezos sought in his testimony to define the retail market more broadly, and in a manner that diffuses Amazon's clout. Amazon accounts for less than 1% of the $25 trillion global retail market, Bezos wrote, and less than 4% of retail in the United States. And while Amazon rarely talks about competitors, Bezos specifically cited Costco, Kroger, Target and Walmart, which he added is "a company more than twice Amazon's size."

A key area of focus for lawmakers is likely to be whether Amazon gives its own products unfair advantages over offerings from rivals on its digital marketplace, an allegation Bezos aimed to counter. The third-party sellers on Amazon account for about 60% of physical product sales on the site, and those sales are growing faster than Amazon's own retail sales, Bezos wrote.

The written testimony did not address the allegation that Amazon uses data collected from third-party merchants to launch its own competing products, an issue that lawmakers on the same subcommittee pressed an Amazon lawyer about a year ago.

Bezos began his written testimony with a folksy refrain on his upbringing and the emergence of Amazon. He started by writing about his mother's struggles giving birth to him when she was a 17-year-old high school student in Albuquerque, N.M. And he wrote about his decision to launch Amazon, an idea his boss at the time told him was "a better idea for somebody who didn't already have a good job." He worked in finance in New York at the time.

"When I'm 80 and reflecting back, I want to have minimized the number of regrets that I have in my life," Bezos wrote. "And most of our regrets are acts of omission - the things we didn't try, the paths untraveled."

The hearing Wednesday will be Bezos's first time testifying before Congress. In his written testimony, Bezos said, as he has previously, that he welcomes the inquiry.

"We should scrutinize all large institutions, whether they're companies, government agencies, or non-profits," Bezos wrote. "Our responsibility is to make sure we pass such scrutiny with flying colors."