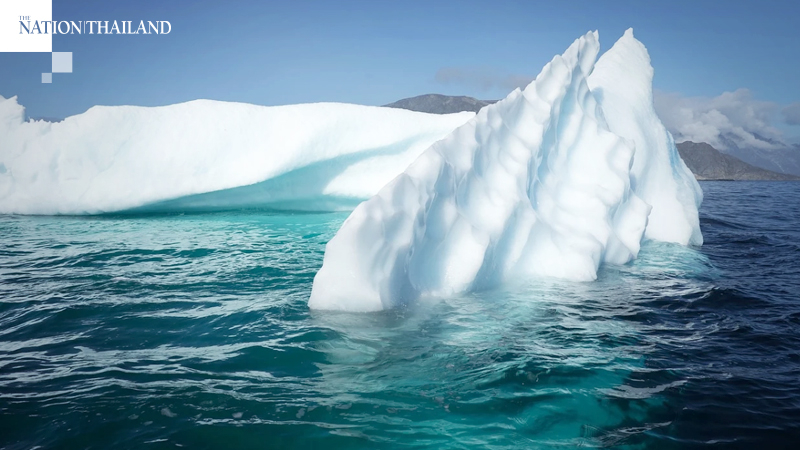 The Arctic summer of 2020 is one that's been marked by raging fires in the Far North, with smoke extending more than 1,000 miles downwind, along with alarming new temperature records and ice melt. While rapid Arctic climate change is not exactly news - the region is warming at about three times the rate of the rest of the world, the manifestations of this phenomena are increasing in severity, scope and societal consequences.

This week, for example, with blazes raging across Siberia, smoke smothered the skies all the way into portions of Alaska. In Svalbard, a Norwegian Arctic archipelago that's seen staggering warming rates in recent years, all-time temperature records were set, turning already receding glaciers into mush, covered by so much turquoise meltwater that it was visible from space.

The Svalbard Archipelago is one of the fastest warming places on Earth, with sea ice and glaciers on the decline. In Longyearbyen, Svalbard, the northernmost inhabited settlement with more than 1,000 residents, saw temperatures soar to 71.1 degrees (21.7 Celsius) on July 25, setting an all-time record high for this location. Longyearbyen had a string of four days that exceeded 68 degrees (20 Celsius), a feat only seen once before, in 1979.

At the same location, the overnight low temperature failed to fall below 62.2 degrees (16.8 Celsius) on the 25th, setting an all-time record for the warmest low temperature.

The average high and low temperatures at this time of year in Longyearbyen are 49 (9.4 Celsius) and 41 degrees (5 Celsius)

The ice cap in Svalbard has the highest surface mass loss of any Arctic ice sheet so far this summer, and hit a new record for surface snow and ice melt on July 25, when temperatures spiked, according to Xavier Fettweiss, a scientist at the University of Liege, Belgium.

While Siberia's extreme temperatures, including a likely all-time Arctic temperature record of 100.4 degrees (38 Celsius) recorded in June in Verkhoyansk, which lies above the Arctic Circle, has received the most attention, it's the wildfires there that are having ripple effects far beyond this region. These fires have continued on their relentless pace since June.

Each day, smoke, containing planet-warming greenhouse gases, has poured into the air, while on the ground flames have been destabilizing permafrost by burning away protective vegetation above the permanently frozen soil. This, too, adds to climate change, since it frees up carbon and methane.

On many days during July, a milky sheen of smoke thick enough to obscure the ground was visible on satellite imagery extending across an expanse that would cover much of the Lower 48 states. The most severe fires have been accompanied by towering smoke plumes, known as pyro cumulonimbus clouds, or pyroCb's.

Arctic wildfire carbon emissions, driven primarily by Siberian fires, hit a record level in July, according to the Copernicus Atmosphere Monitoring Service, a European Union science agency based in Reading, England. Such data stretches back 18 years, with an increase in Arctic fire emissions seen during that period.

Between July 1 and July 23, the estimated July total carbon emissions from fires in the Siberian Arctic amount to 100 megatonnes of carbon dioxide, said Mark Parrington, a senior scientist with the Copernicus Atmospheric Monitoring Service in Reading, England, via email. Parrington said this is on top of the 59 megatonnes of carbon dioxide emitted from Arctic Circle fires in June.

"The large cluster of fires in well within the Siberian Arctic Circle has been burning with high intensity (higher than the highest daily total calculated for the region in 2019) for several days and look set to continue," Parrington said on July 24, a prediction that has turned out to be true.

Smoke from these fires, including ash and carbon monoxide, spread across the Chukchi Sea as far as Alaska.

Siberia has been record warm for the entire calendar year so far. The Siberian fires and in particular, the prolonged heat, has already been directly tied to human-caused climate change.

In a rapid analysis, researchers found that the prolonged January-to-June heat in northern Siberia was made at least 600 times as likely by human-caused climate change. This led them to conclude such an event would be nearly impossible in the absence of global warming.

In addition, other parts of the Arctic are reeling from climate change-related effects, along with transient weather features.

Meanwhile, the extreme temperatures in the Scandinavian Arctic and Siberia has spilled over to northern Canada now too. On July 25, a temperature of 71.4 was recorded in Eureka, Nunavut, located in the Canadian Arctic at 80 degrees north latitude. According to Mika Rantanen, a researcher at the Finnish Meteorological Institute, that may be the highest temperature on record so far north.

In an example of how extreme weather events can interact with long-term climate change-related trends, a strong low pressure area spun up early this week over the Beaufort Sea, north of Alaska, potentially hastening sea ice melt. The low is reminiscent of a powerful storm that churned the sea ice cover during the summer melt season of 2012. That storm helped to accelerate ice loss and leading to an all-time record low ice extent.

Despite being of similar intensity, the recent storm is unlikely to have the same effects on the trajectory of the melt season, sea ice experts say. While noting that sea ice extent is currently at record low territory, the storm struck a region full of the thickest ice in the Arctic. Most of the ice loss this summer has come on the Eurasian side of the Arctic, including north of Siberia, where the Northern Sea Route very likely opened at its earliest date on record, a full month earlier than average.

"The key really is the timing of the storm and the thickness of the ice that's there," said Julienne Stroeve, a senior scientist at the National Snow and Ice Data Center (NSIDC) in Boulder, Colo., in an email.

There is a chance the storm could speed up ice melt, but it depends on a number of factors.

"Since storms tend to cause ice divergence, if the storm pushes some of the ice in the Beaufort [Sea] towards [the] Bering Strait then it will likely melt out, as the ocean temperatures there are up to 5 Celsius warmer than average," Stroeve said.

Walt Meier, an NSIDC colleague of Stroeve's, noted that the 2012 storm struck later in the melt season and in "a region where the ice cover was already broken up and was fairly disperse (low concentration). So there was a lot of opportunity for the storm to kick up waves and really decimate the ice. This year, the ice in that region is, at least at the moment, looking more formidable. It's more compacted and likely thicker. So this year's storm may not have the same impact as in 2012. We shall see."

Almost uniformly, scientists studying Arctic warming emphasize how swiftly changes are occurring throughout the vast region. A new study, published Wednesday in Nature Climate Change, backs that impression up, showing that "major portions" of the region have been warming at a rate of 1.8 degrees (1 Celsius) per decade for the past 40 years, which constitutes an "abrupt climate change event" when viewed in light of paleoclimate records of abrupt glacial episodes in the past.

The study found that even the most dire climate model scenarios tend to underestimate the recent pace and extent of climate change in the Arctic. Co-author Martin Stendel, a research scientist at the Danish Meteorological Agency, wrote "[a]dditional abrupt changes can only be avoided following a low emission scenario," via a Twitter message.