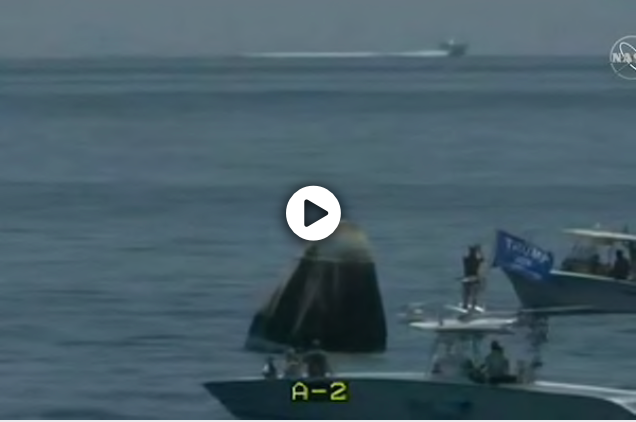 NASA astronauts Bob Behnken and Doug Hurley completed a fiery, high-speed journey back from the International Space Station on Sunday, splashing down in calm Gulf of Mexico waters off the coast of Pensacola, Fla., hundreds of miles from a churning Tropical Storm Isaias in the Atlantic in a triumphal denouement to a historic mission.

It was the first time in the 59-year history of crewed American space travel that astronauts had used the Gulf of Mexico as a landing site, adding to other firsts that marked a new chapter in NASA's human spaceflight program: the first launch of American astronauts to orbit from U.S. soil since the space shuttle was retired in 2011 and the first launch into orbit of humans on vehicles owned and operated by a private company.

"Today we really made history. We are entering a new era of human spaceflight," NASA Administrator Jim Bridenstine said at a news conference after the two astronauts emerged from the capsule.

Gwynne Shotwell, president and chief operating officer of SpaceX, the private company that engineered the flight, called it "an extraordinary mission."

"This is really just the beginning," she said. "We are starting the journey of bringing people regularly to and from low Earth orbit, then onto the moon and then ultimately onto Mars."

SpaceX's Dragon spacecraft floated under a quartet of parachutes and splashed down at 2:48 p.m. Eastern time, exactly on time, marking the first time NASA astronauts had landed at sea since Apollo-Soyuz, the joint U.S.-Soviet mission in 1975.

"On behalf of the SpaceX and NASA teams, welcome home and thanks for flying SpaceX," mission control radioed to the spacecraft after it landed.

"It's truly our honor and privilege," Hurley responded. "On behalf of the Dragon Endeavour, congrats to NASA and SpaceX."

The mission - the final milestone in a rigorous test program years in the making - was celebrated as a victory for NASA and its decision under President Barack Obama to entrust the private sector with the lives of its astronauts. And it served as a rare bright spot in a year full of turmoil and devastation, from the deadly coronavirus pandemic to the social unrest in the wake of George Floyd's death to the clashes between protesters and authorities in cities from Portland, Ore., to Richmond, Va.

Instead of scenes of exhausted hospital workers, smoke-filled streets, and mounting death tolls from a virus that continues to spread, here were a pair of astronauts, smiling and giving a thumbs-up as flight technicians helped them from their spacecraft in a scene reminiscent of the early days of the space program. And it came days after another triumphant moment for NASA, the launch of the Mars Perseverance rover, which is expected to reach the Red Planet in February.

Shortly after the May 30 launch of the astronauts into orbit, SpaceX founder Elon Musk grew emotional as he talked about the responsibility of getting the astronauts, both fathers to young boys, back to their families safely.

To make it home, the spacecraft undocked from the space station at 7:35 p.m. Eastern time Saturday evening while it was orbiting Earth at 17,500 mph, or more than 22 times the speed of sound. On Sunday, about an hour before splashdown, it fired its engines for one final burn that began its descent home. As it plunged into the thickening atmosphere, the friction generated enormous heat, temperatures as high as 3,500 degrees.

The capsule, named Endeavour by its crew in homage to the space shuttle of the same name, appeared to weather the trip home successfully, scorch marks and all. The heat shield withstood temperatures that left the once-bright-white capsule looking like a toasted marshmallow.

Rescue crews descended on the Dragon spacecraft minutes after it landed, stabilizing the capsule as it bobbed in the water, checking to make sure there were no propellant leaks and gathering the parachutes. The spacecraft was then hoisted onto the deck of the Go Navigator recovery ship, where medical personnel were waiting to check out Hurley and Behnken.

The recovery process experienced two small hiccups. After the spacecraft splashed down, private boaters quickly surrounded the Endeavour before SpaceX safety crews could shoo them away. One boat with a Trump 2020 flag came within yards of the spacecraft.

The Coast Guard had cleared a 10-nautical-mile safe zone around the landing site, NASA and SpaceX officials said, but it was breached.

"We had all the clearance that was required at landing. That capsule was in the water for a good period of time and the boats just made a bee line for it," Bridenstine said. "It's a big area we have to clear, and it's probably going to take more resources. . . . We need to do a better job next time for sure."

Technicians aboard the Go Navigator also briefly delayed opening the hatch because of a buildup of harmful fumes around the capsule. Mission controllers detected higher-than-appropriate amounts of "hypergolic fumes," or gases that could explode when coming in contact with one another. Tests found no toxic fumes inside the capsule.

NASA and SpaceX said they took extra precautions because of the coronavirus pandemic. The crews on the ship were tested and quarantined, and everyone was to be wearing masks.

Each of the astronauts gave a thumbs-up as he was wheeled off the spacecraft on a stretcher - a routine practice for astronauts who've experience a prolonged period without gravity.

"Thank you for doing the most important parts and most difficult parts of human spaceflight, sending us into orbit and bringing us home safely," said Behnken, who was first out of the capsule. "Thank you very much for the good ship Endeavour."

Hurley came out moments later. "For anyone who's touched Endeavour, you should take a moment to cherish this day, given everything that's happened this year," he said.

Behnken and Hurley were scheduled to fly back to Houston on Sunday to be reunited with their families.

Hurley and Behnken are both married to astronauts they met in their astronaut class 20 years ago. While Hurley's wife, Karen Nyberg, is no longer in the astronauts corps, Benhken's wife, Megan McArthur, is. She's scheduled to fly to the space station in the spring on the same spacecraft that brought her husband home Sunday.

Before that happens, NASA and SpaceX will evaluate the capsule to make sure it performed as expected. If all goes according to plan, SpaceX's next human spaceflight mission could come within six weeks.