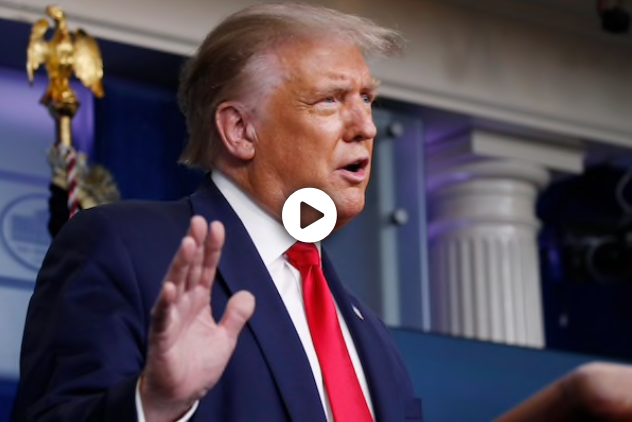 WASHINGTON - President Donald Trump on Monday suggested that the U.S. Treasury should collect a portion of a sale of the social media company TikTok, though it was unclear under what authority the White House could demand such a payment.

Speaking to reporters at the White House, Trump reiterated that he wants TikTok to be forced to cease operations in the U.S. by about Sept. 15 if it is not sold to Microsoft or another U.S.-based company. If such a sale goes through, the president said, part of the proceeds should be paid to U.S. taxpayers as compensation for operating in America.

"A very substantial portion of that price is going to have to come into the Treasury of the United States," Trump said of the potential TikTok sale. "The United States should be reimbursed or paid because without the United States they don't have anything." The president added: "It's a little bit like the landlord tenant. Without a lease, the tenant has nothing. So they pay what's called key money or they pay something."

The comments come as the president seeks to amplify pressure on TikTok. On Friday, Trump said he plans to ban the Chinese-owned company from the United States because of national security concerns. Peter Navarro, Trump's senior economic official, told Fox News on Monday that he was not sure whether it was "prudent" to allow Microsoft to make the deal with TikTok.

"The question is, given China's civil-military infusion . . . can we trust any company that operates in China, has servers in China, has software in China, to protect your children?" Navarro told Fox News.

Microsoft confirmed in a blog post Sunday that it is pursuing the acquisition of the U.S. division of TikTok after chief executive Satya Nadella spoke with Trump.

Trump appeared to be open to Microsoft making the purchase, despite Navarro's comments, though he raised questions about the logistics of doing so.

"The name is hot; the brand is hot - how do you do that if it's owned by two different companies?" Trump said.

The U.S. government's Committee on Foreign Investment (CFIUS) began investigating an acquisition by Beijing-based ByteDance last year, after lawmakers asked the government to step in over national security concerns. ByteDance bought karaoke app Musical.ly in 2017 and merged it with TikTok, launching the app to mass popularity in the United States.

The CFIUS is an interagency committee that reviews proposed takeovers involving a foreign buyer - and sometimes already completed takeovers - for national security risks. It ultimately recommends to the president whether deals should be blocked or unwound.

Lawyers familiar with CFIUS reviews said the Treasury does typically collect money during the process, because companies are required to pay modest fees to cover the cost of the review. The fees are based on the size of the proposed transaction and cannot exceed $300,000.

In its blog post this weekend, Microsoft said it had made a joint filing with ByteDance to the CFIUS outlining their deal talks. The CFIUS would need to sign off on the details of any transaction before it could go through.

Microsoft and Trump have mentioned Sept. 15 as a deadline for concluding the talks. That probably stems from the 45-day clock the CFIUS typically sets to vet transactions, lawyers said.

TikTok has confirmed the it is in preliminary conversations to sell the U.S. portion of the application. Microsoft also issued a statement about the importance of the sale of TikTok "providing proper economic benefits" to the U.S. and U.S. Treasury, comments that could be interpreted to mean future tax revenue.

"Microsoft fully appreciates the importance of addressing the President's concerns," the company said in a statement. "It is committed to acquiring TikTok subject to a complete security review and providing proper economic benefits to the United States, including the United States Treasury."

Trump has targeted TikTok for many months, and the president has intensified his attacks against the company this summer as he continues to blame China for its role in the novel coronavirus pandemic. Trump suggested in a television interview last month that a potential ban of TikTok would be in retaliation to the virus's spread.

Lawmakers from both sides of the aisle have supported a government crackdown on TikTok, though not everyone agrees on the best way to move forward.

"A US company should buy TikTok so everyone can keep using it and your data is safe," Sen. Chuck Schumer, D-N.Y., tweeted Monday.

Banning TikTok in the U.S. - similar to what happened in India - would spark an uproar among its young American fans, who have already been posting videos for weeks urging the government to keep the app online and offering tips on how to access it even if it does get blocked. TikTok says it has 100 million U.S. users, and the app has been downloaded 2 billion times across the world, according to data from market research firm Sensor Tower.

TikTok spokesperson Hilary McQuaide said in a statement Monday that the app is still focused on the long-term.

"TikTok will be here for many years to come," she said. She did not comment specifically on the potential Microsoft deal or Trump's recent comments.

The company has been positioning itself as a friend to the U.S. this year, emphasizing that it has 1,500 employees in the country and even hiring former Disney executive Kevin Mayer to serve as its U.S. chief executive. It continues to assert that it keeps all U.S. user data stored in the country and does not share customer information with the Chinese government, but its insistence has so far not convinced Trump or lawmakers that China could not get access to Americans' information if it tried.

Microsoft said it would ensure that any private data about American users was transferred and stored in the U.S. if it takes over the company.

On Saturday, after Trump told reporters again that he would work to ban the app, TikTok's general manager for the U.S. posted a video assuring users that TikTok is "here for the long run."

Microsoft emerged as a suitor for TikTok, in part because it's one of the few tech giants that is not in the crosshairs of Trump, Congress or regulators. When a House subcommittee summoned top tech CEOs to a hearing last week to grill them on abusing their power to quash rivals, Microsoft was conspicuous by its absence. Other tech companies with large social-media business that might seem complementary to TikTok, such as Facebook or Google, could be hard-pressed to complete a deal because of that government scrutiny.

And while TikTok may seem an unlikely acquisition target for Microsoft, whose core business is producing software and services for corporate customers, the start-up could benefit some of its businesses. TikTok has an emerging advertising business that could boost the multibillion-dollar ad operation that Microsoft runs through its Bing search service. Microsoft's Xbox gaming business is its largest consumer offering, and TikTok could fit as an adjacent business to that.

Like three previous Microsoft acquisitions, Minecraft game maker Mojang, professional social network LinkedIn and software developer service GitHub, TikTok has developed a platform that used by a deeply engaged community. Microsoft has largely allowed each of those businesses to operate independently, something that seems likely if it ultimately acquires TikTok.

And maybe most compelling for Microsoft is the massive trove of data that TikTok produces daily about which videos get shared by its users. That data could help inform artificial-intelligence technology that Microsoft is developing to train it to anticipate what might become popular.

"This information is going to be useful to them. But the question is how are they going to use it responsibly," said Victoria Petrock, an analyst with the research firm eMarketer.