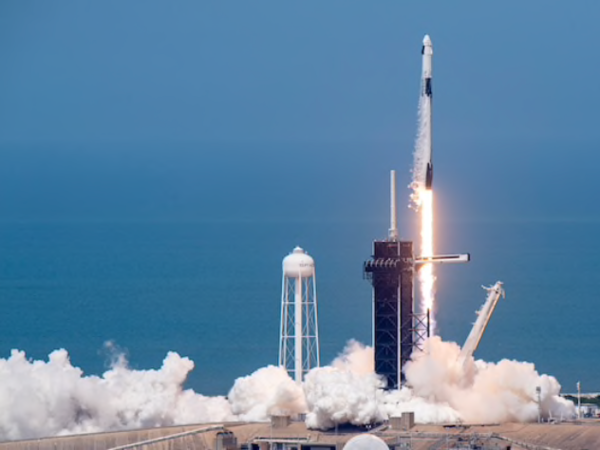 Dragon roared on the way down.

As it plunged into the atmosphere Sunday on its way back to Earth from the International Space Station, the spacecraft "really came alive," NASA astronaut Bob Behnken said. "It doesn't sound like a machine; it sounds like an animal."

The thrusters were firing. Heat was building up outside the capsule, eventually rising to 3,500 degrees, engulfing the spacecraft in flames that quickly charred the once pearly white exterior, and clouded the windows.

But inside the capsule, Behnken and his fellow astronaut Doug Hurley were calm and comfortable, during what was a "flawless" mission, they said Tuesday during their first news conference since they completed their test flight.

"The atmosphere starts to make noise you can you can hear that rumble outside the vehicle and as the vehicle tries to control you feel a little bit of that shimmy in your body," Behnken said.

Still, the pair, were "really, really comfortable coming through the atmosphere, even though it felt like we were inside of an animal," he said.

The landing in the Gulf of Mexico, 39 miles southeast of Pensacola, Fla., was the dramatic end to a historic mission that had begun two months earlier, when Behnken and Hurley launched from the Kennedy Space Center to the space station. It was the first launch of NASA astronauts from United States soil since the space shuttle was returned in 2011. It was also the first time a private company flew humans to orbit.

Along with Boeing, SpaceX, the California company founded by Elon Musk, is under contract to design spacecraft capable of flying astronauts to the station.

According to Hurley and Behken, SpaceX's Dragon is a heck of a vehicle that endured a fiery, high-stakes ride that went from 17,500 m.p.h. some 240 miles high in orbit to bobbing in the sea within about an hour.

One of the most significant events of the return came when the trunk, the unpressurized module that is covered on one half by solar arrays, separated from the capsule. Then it fired its thrusters for the "de-orbit" burn, which put the spacecraft on a trajectory to land. And finally the parachute deployments, culminating a series of events that came with surprising speed. And some force.

"All the separation events, from the trunk separation through the parachute firings were very much like getting hit in the back of a chair with a baseball bat, you know just a crack," Behnken said.

Once they were safely in the water, recovery crews descended quickly on the vehicle to make sure it was safe. But so did a flotilla of civilian boaters, who came uncomfortably close to the spacecraft, which was still loaded with propellant.

SpaceX and NASA said they need to do a better job of keeping people at bay next time.

But inside the spacecraft, Behnken and Hurley had no idea that they had been greeted by a small navy of gawkers because their windows were so charred. "You could basically tell that it was daylight but very little else," Hurley said. "So we didn't really see anything clearly out the windows."

Instead, they pulled out the satellite phone they had on board and tested it to make sure it worked.

The first call was to the flight director console at NASA's mission control center in Houston.

"Yeah, I can see that," Anthony Vareha, the flight director recalled on Twitter. After the call ended, his colleague suggested he should have said, "Oh, crap, was splashdown supposed to be today?"

By then, Hurley and Behnken were calling their wives, both of whom are also astronauts.

"As all folks know that have gone through this, as a family member, you're kind of helpless, until you hear the voice of your loved one on the other end," Hurley said. "And this was a great chance to reassure them that we were in the water. We were OK."

Within about 30 minutes they were on the deck of the recovery ship. They were helicoptered to shore, where an airplane, and a pizza dinner, were waiting for them.

Soon, they were home in Houston, ready to resume life on Earth as husbands and fathers. For Behnken that includes getting his 6-year-old son the puppy he promised him.

But first they have to have a little heart-to-heart chat about the duties involved.

His son has to "show me that he's ready to take on that responsibility," Behnken said. "Otherwise it'll be my dog instead of his."