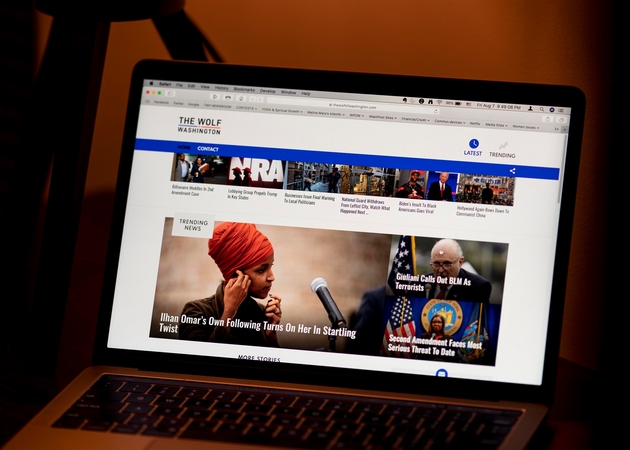 The reality curated by "The Bearded Patriot" and "The Wolf of Washington" is dismal.

The websites tell of nonstop riots and "crazed leftists." They warn of online censorship and the wiles of an "anarchist billionaire," a reference to George Soros, the liberal investor and Holocaust survivor.

The material is tailor-made to inflame right-wing passions. But its underlying purpose is to collect email addresses and other personal information from impassioned readers, whose inboxes then fill up with narrowly targeted ads. The effect is to monetize the anger stoked by misleading political content - for as much as $2,500 per list of contacts.

An investigation by Alethea Group, an organization combating disinformation that draws its name from the Greek word for "truth," has linked the operation to Mark S. Evans Jr., a self-proclaimed "online multimillionaire" who affixes "DM," for "dealmaker," to his name. The network of 178 sites, at least half of which are politically themed and share visual as well as technical features, is designed to harvest email addresses, which are then sold to commercial brands, according to Alethea Group's analysis, and possibly also to political campaigns.

The findings, which were provided to The Washington Post, illuminate the financial motives behind the spread of hyperpartisan, low-quality news. And they reveal how merchants of misinformation are exploiting techniques of data collection to more efficiently capitalize on polarization and falsehoods and more effectively target specific communities.

"This is for-profit fearmongering enhanced by aggressive data collection," said Cindy Otis, Alethea Group's vice president of analysis. The digital marketing apparatus made possible by the sites, including lucrative data profiles of their visitors, "comes with the capability to support political consulting or campaign work," said Otis, a former CIA analyst and the author of "True or False: A CIA Analyst's Guide to Spotting Fake News."

Email marketing and campaign list-building are not cutting-edge tactics. But the findings by Alethea Group shed light on a practice further to the extreme, one devoid of any apparent newsgathering mission and unfolding almost entirely in the shadows, with recycled content and stock images.

Peter F. Aquart, an associate of Evans listed as an agent in several of his ventures, posted this summer about "skip tracing," a practice associated with bounty hunters that involves determining a person's whereabouts and other private information. "Who are you using?" he asked on Facebook. Around the same time, Aquart hinted at one possible use for the more robust records he was pursuing. He wrote on LinkedIn that he was seeking support for a mass-texting program, a service increasingly central to political campaigns.

"Pairing collected data with things like skip tracing software and bulk messaging apps - it's where a lot of these networks are headed," Otis said. "It is the future of political disinformation."

Neither Evans nor Aquart responded to calls or text messages seeking comment, or to emailed questions about the websites, some of which were previously traced to Evans by BuzzFeed News and linked to advertisements for masks. Aquart acknowledged receipt of a text message but stopped replying after a Washington Post reporter identified himself.

Several LLCs operated by the two men, including Rightside Data and Direct Mailers Group, are set up to sell the data collected from the right-wing websites. The firms provide contact details that are also associated with some of the news sites, and a media and marketing specialist listed as a Rightside employee, Andy Pangerl, posted ads in May claiming access to "30 Conservative Leaning Email Lists."

The lists, he wrote, include "1.5 million baby boomers." Several months earlier, a Facebook page associated with the company advertised a list collected from one of its sites, Real American Pundit. It offered 173,000 email addresses for $2,500.

A LinkedIn profile for Rightside Data, which has also done business as Cash Flow Lead Gen, says it is "focused on delivering highly targeted, quality email leads . . . with our newsletter assets."

The description adds, "We drive clicks."

The nimble enterprise offers a case study in how domestic actors stand to profit from the pollution of the online information ecosystem, which has only intensified, experts say, since the 2016 election brought the dangers of disinformation to the fore. The labor required to set up the sites, repackaging existing headlines with a more explicitly partisan or sensationalistic angle, is minimal, said Lisa-Maria Neudert, a researcher with Oxford's Computational Propaganda Project. But the potential payoff, from even a few stories that gain viral attention on social media, is significant.

"It's a huge crisis," said Chris Vargo, a professor of data analytics and digital advertising at the University of Colorado at Boulder. "There are thousands of these sites, fueling hyperpartisanship, reinforcing people's existing beliefs and making it possible to target them with dangerous disinformation about anything from an election to a vaccine for the coronavirus."

Partisan interests do not appear to be a primary motivation for the people behind the online network. Pangerl - whose LinkedIn profile indicates that he formerly worked for Newsmax Media, a conservative outlet whose email lists were tapped for online fundraising by President Trump's campaign in 2016 - has made pro-Trump posts, including a tweet ridiculing a Democratic primary debate and tagging the president and his eldest son and daughter, along with a range of right-wing pundits.

Evans, however, rarely posts overtly political messages, though he does use news events to advance his business philosophy. Several days after Trump's election in 2016, he titled a post, "President-Elect Trump's 100-Day plan . . ." The eye-catching headline was only a hook to tell clients that the president's plans were less important than the question of how they were bettering their own lives, as Evans wrote, asking, "So what's your 100-day plan?"

The tactic speaks to Trump's place at the center of viral clickbait.

"The worst of the Web used to be cat videos," said Joshua Braun, a scholar of online media at the University of Massachusetts at Amherst. "Now it's Trump or viral hoaxes around coronavirus."

Advanced ad targeting makes it possible to capitalize on the passions the president incites to market products to a narrower and narrower segment of people, Braun said. These technologies, which were manipulated by the Russians in 2016, have drawn scrutiny on Capitol Hill. They have also spurred a wave of research documenting how ad targeting based on Web-browsing behavior reinforces racial bias and inflames partisanship, among other harmful outcomes.

In the case of the network linked to Evans, profit appears to come not from Web advertising but from newsletter sign-ups. Evans owns or operates a cluster of businesses - with addresses in West Palm Beach and Riviera Beach, Fla., among other locations - that focus on digital marketing, real estate transactions and other means of quickly amassing significant riches.

But his main mission seems to be that of a life coach. Claiming to advise "thousands of people across the world," he offers to transform clients from "mules," who toil away with little reward, into "magicians," who achieve results within 10 minutes. He dispatches his advice in morning "Cigars and Coffee" sessions, streamed live on social media, where he tells his followers, who usually number no more than several hundred per session, to "get addicted to winning."

Evans offers his own life story as a model for would-be clients to emulate. A self-published memoir tells of his ascent from a trailer park in Ohio - "barely graduating high school" - to his life in South Florida "making more money than I ever dreamed possible while traveling the world." He identifies two primary ventures - "a massive real estate investment firm and a lucrative media company" - that he says "generate millions of dollars each per year."

One of the lessons he took with him from his childhood, he says in one video, is to "be honest, be ethical, do the right thing, even if it hurts." At the same time, the overarching promise he recalls making to himself was, "I'm going to do whatever I can in my powers to go out and achieve wealth at a whole new level."

That promise took shape in the form of American Wealth Builders, a business that boasts of helping real estate investors diversify their holdings. Comments on the group's Better Business Bureau profile raise questions about its effectiveness. "This is by far the worst investment you could ever possibly make," one apparent client wrote in April 2019. "You would be better off to simply light your hundred dollar bills on fire."

In the past, Agora subsidiaries have expanded their marketing reach by leasing email lists from prominent conservatives, including Newt Gingrich, the former House speaker and Republican candidate for president, and Mike Huckabee, the former Arkansas governor who twice ran for the GOP presidential nomination.

Information gleaned from the right-wing blogs serves the same purpose fulfilled by the contact lists of conservative politicians. The American Pundit, Bearded Patriot and Wolf of Washington websites appear to be part of a common network, centrally designed and operated, according to Alethea Group's findings. Many of them share domain registration data, IP addresses and Google AdSense identification numbers.

The sites also use similar coding and design features. Virtually all of them include an opportunity to enter an email address and sign up for a newsletter. They also feature similar privacy policies stating that the sites are collecting data from their visitors.

Most of the content is pulled from other conservative outlets, such as the Daily Wire and the Washington Examiner. Writers for external sites are sometimes credited, while other stories appear without bylines, among the key indicators of suspect media identified by the Global Disinformation Index, a Britain-based research group.

Some of the figures operating the sites took steps to conceal their involvement, according to Alethea Group.

One called "Patriot Reserve," which employs a common tactic for right-wing blogs selling Trump paraphernalia, identifies its chief executive as "Ron Madison." But the headshot is a stock image, and the website uses the same Wisconsin address listed for the Direct Mailers Group and other websites in the network. The site offers a commemorative Trump coin, which it says typically sells for $127, for $9.

It assures viewers, "This is not a gimmick!"