Students at Ban Khobdong School are pictured in their Palong hilltribe costumes.

By Jintana Panyaarvudh
Special to The Nation

To fulfil her dream, the 11-year-old Palong hilltribe girl knows she must study hard to master the three languages she already speaks – her native Palong, Thai and English.

But ordinary subjects are not enough to achieve her ambition, so she needs her school to provide music tuition too.

“Learning languages helps me to speak clearly and fluently, but music class will show me how to use rhythm correctly and that will help me get good at voiceover,” she said. 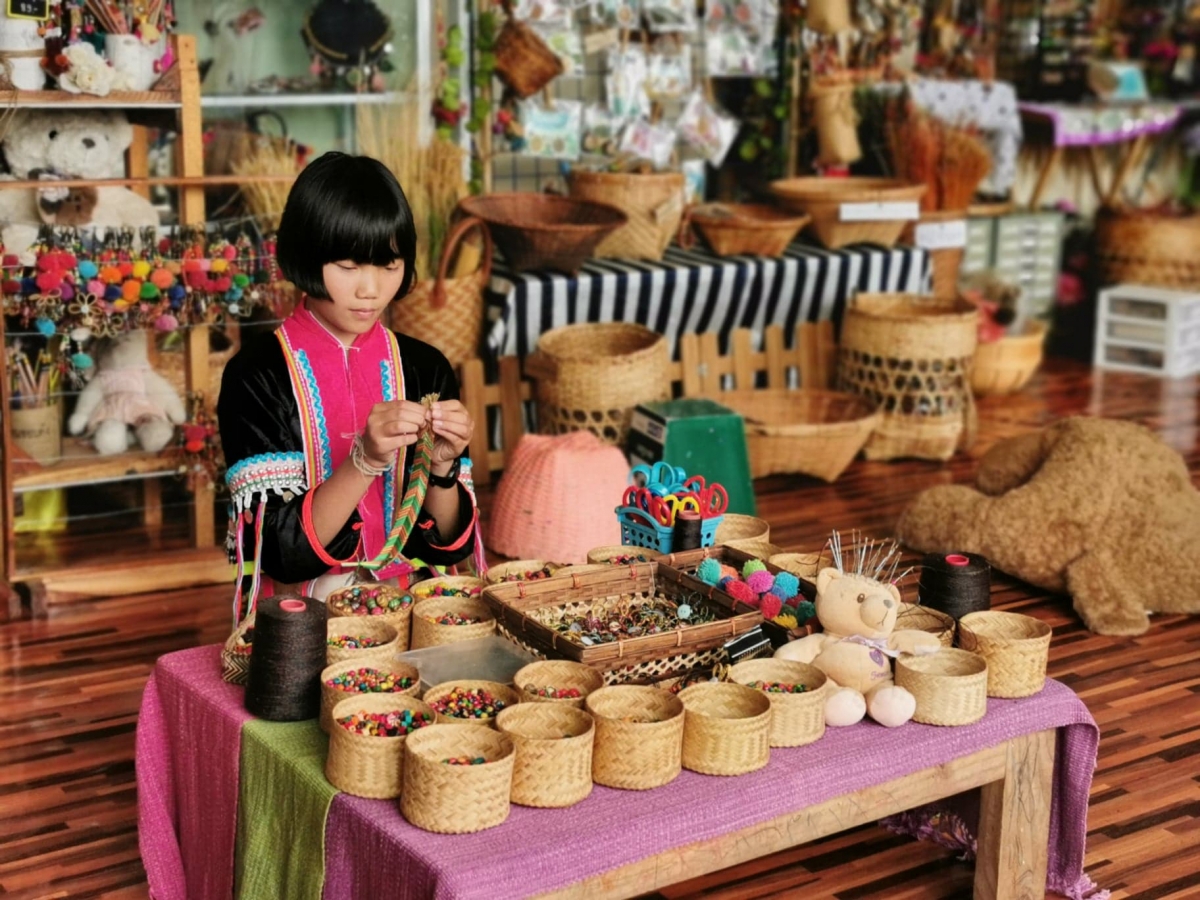 Kuljira is one of many hilltribe students living in remote and mountainous northern Thailand, where the quality of education is often low due to economic and social deprivation as well as cultural difference.

Attempting to improve the situation, five schools in Doi Ang Khang have partnered to conduct research on “new normal” education for the 21st century that caters to students in remote areas. The schools of Ban Khobdong, Ban Luang and Debsirin 9 in Fang district, and Ban Phadaeng and Santiwana in Chai Prakarn district are now collectively known as the “Angkhang Model” network.

Headed by Riam Singthorn, an award-winning teacher at Ban Khobdong school, the research project is aimed at designing curriculums that empower graduating students to earn a living from their local resources so they don’t need to leave for work in big cities.

The project is funded by the Thailand Science Research and Innovation (TSRI).

Among many problems faced by underprivileged students here is lower-quality education, which affects their chances when competing for college places with students in big cities. Most are from ethnic groups and do not have Thai citizenship, making it even more difficult to enter higher education. And with pressure high to get a job and begin earning, very few continue their study beyond school.

Doi Ang Khang is renowned among tourists for its blooming wild Himalayan cherry trees and cool weather, but the local economy has taken a hit from an ecosystem rehab plan. Resorts have been demolished or closed to tourists, forcing local parents and children to leave the area and make their livelihoods elsewhere.

However, the Covid-19 lockdown saw locals flock back to their hometowns, where they had to seek whatever local resources were available to earn a living.

While some struggled, others turned the crisis into an opportunity. Villagers in Ban Phadaeng, Chai Prakarn district, found a way to make money from its avocado trees, earning Bt100,000 to Bt1 million from selling seedlings online during the outbreak.

Realising that schools had a vital role to play in Ang Khang’s push for self-sufficiency, Riam said the network switched the focus to alternative and vocational education.

The school’s directors, teachers, parents and students agreed that adding vocational skills training to their normal curriculum would help students earn a living in their hometowns when they graduated.

With Doi Ang Khang being “set to zero” under its ecosystem rehab plan, the TSRI asked the researchers to refocus the goal from literacy to how to develop locals, their community and surroundings simultaneously for the sake of Ang Khang’s future, explained Benjawan Wongkam, the TSRI officer who oversaw the research project.

She said literacy alone was not an answer for the area’s problems since parents here want their children to find jobs quickly and make a living.

Though students lacked opportunity for further study due to their statelessness, if they were given skills to exploit existing natural resources in the area or follow sufficiency economy practices, they could stay at home and earn money, she added.

Schools under the Angkhang Model are already teaching a range of skills in addition to their normal curriculum. Students at Santiwana School are learning cooking, crafting and electrician’s skills and using them to make money, while pupils at Ban Phadaeng School are taught how to graft avocado seedlings and process the fruit into ice cream and soap.

“What we are trying to do is to support our students so they can make their livelihood here when they graduate, and don’t need to leave home to find jobs elsewhere,” said Wasant Muensorn, director of Santiwana School.

For local students like Kuljira, the future is starting to look brighter in Doi Ang Khang.